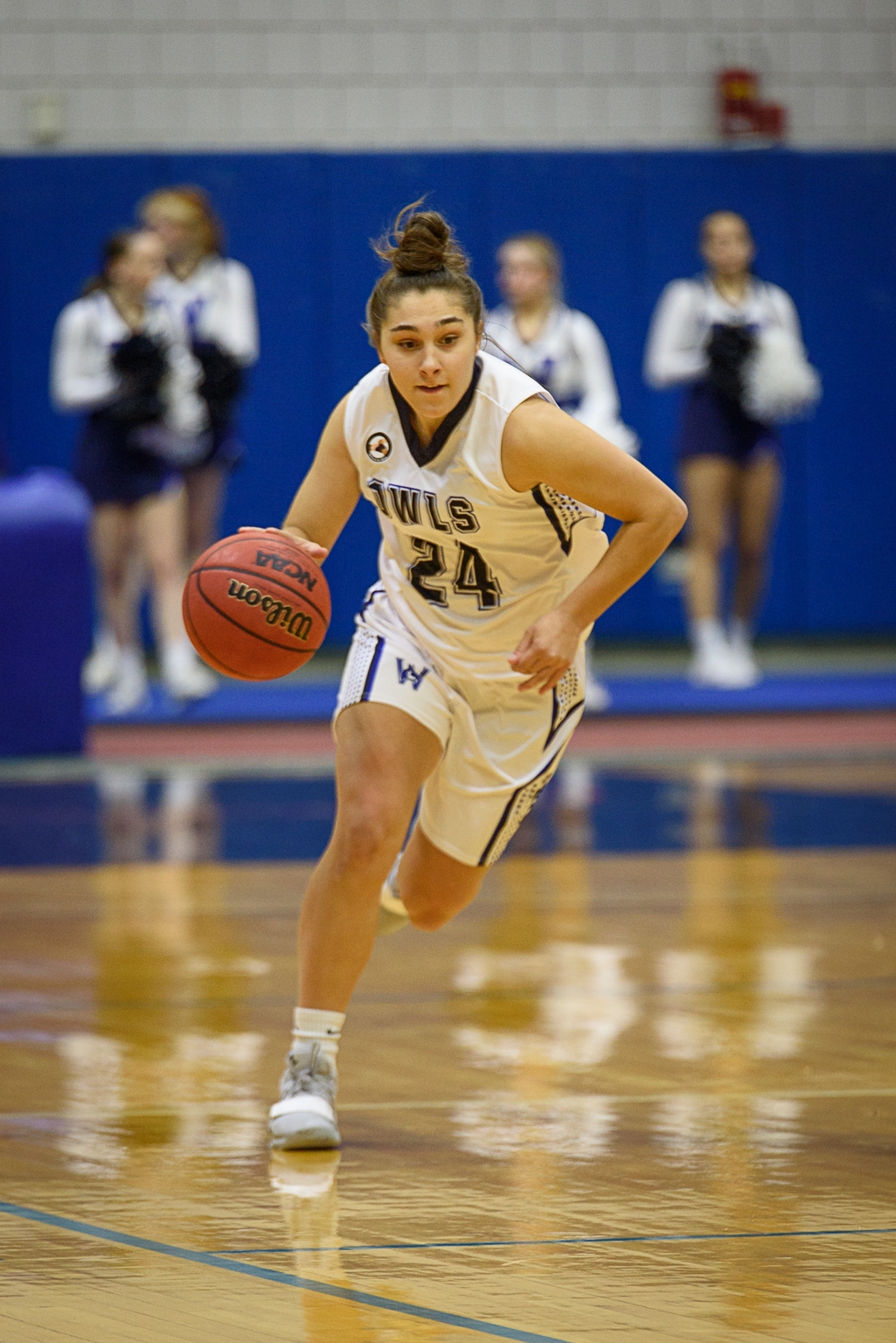 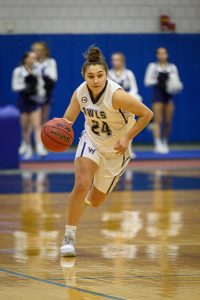 WESTFIELD – Two years ago, Olivia Hadla became just the seventh basketball player to join the 1,000-point club at Westfield High School. Now, the 5-foot, 5-inch Westfield State sophomore point guard is one of a half-dozen Owls players on the roster who each reached that milestone in high school.
On Tuesday, Hadla received her first regular season victory in a Westfield State women’s basketball uniform, helping the Owls snap a five-game losing streak with an 82-63 win at home over the New England College Pilgrims.
“I know my scoring ability but it is also like starting over,” said Hadla, who has received the starting nod in each of the team’s six games this season. Westfield State did not compete in 2020 due to Covid concerns.
“I think that we’re just getting started,” she said.
Hadla helped her team get off on the right foot Tuesday with a strong first quarter. The Westfield native forced a NEC turnover in the opening moments of the game, joining Alison Mendel (Adams/Hoosac Valley) in a successful trap on a Pilgrims ball-handler near midcourt. A minute later, she grabbed an offensive rebound, made a three-point shot, and made 1-of-2 free throws – all in the span of 20 seconds – to help Westfield State build an early 14-4 lead.
Westfield State’s scoring leader, senior Melissa Gray (Peabody) bookended the first quarter with a pair of 3-pointers. Gray took over the game after that, knocking down another three as the Owls manufactured a double-digit lead in the second quarter.
Gray scored the team’s first eight points of the third quarter. Teammate Jess Gardner (Webster/Holy Name) made a shot from beyond the arc with 6:53 remaining in the quarter to give Westfield State its largest lead of the night, 54-35.
The fourth quarter proved to be just a formality as Gray padded her final stats, finishing with a game-high 28 points and double-double (13 rebounds). She also had four steals. Westfield State’s Paris Wilkey (Lynn) scored 13 points.
New England College had three players score in double digits. Kayla Goldring (Hollywood, Md.) led the Pilgrims with 14 points. Brianna Pierreval (Boynton Beach, Fla.), and Andrea Smillie (Mirmar, Fla.) each had 13.
“I think we have been progressing every game little by little,” said Gray, whose collegiate career points total now sits at 1,424. She is fifth all-time at Westfield State. Amanda Braden is the school’s all-time leading scorer with 1,526 points, set back in 1998. “I think we anticipated the pass very well. …That made the difference today.”
Gray said Hadla was also a difference-maker.
“Liv has been good with putting those shots up and getting to the rim,” Gray said. “She has been awesome at the point. ..She sees the floor well. She has a great shot. …I think she’s going to get better and better each year.”
Hadla fits the system, or rather “The System,” a fast-tempo brand of basketball developed by coach David Arsenault at Grinnell College which relies on shooting three-point field goals, applying constant pressure with a full-court press, and frequent player substitutions.
Westfield State women’s basketball head coach Andrea Bertini’s system mimics the original “System” in that she plays 12 to 14 players a game for a good amount of minutes, substituting five players nearly every 45 seconds. The goal is to take more shots than the opponent.
“A lot of young players did not get a college season last year or are coming straight out of high school so it’s a very big learning curve and the way that we play, it’s an even bigger learning curve,” coach Bertini said. “Sometimes your youth kind of sticks out. I think the (0-5) start is indicative of that a little bit and we’re also trying to figure out what we’re supposed to be doing.”
Coach Bertini said Hadla is the perfect fit for her coaching style though.
“We want a player like Olivia, someone who is athletic, who can get up and down the floor quickly, who can jump well, rebound,” Bertini said. “She can handle the ball; she can shoot it well. She rebounds incredibly well for her size, being a point guard.”
Hadla’s progress even caught her head coach off guard.
“(Olivia) is picking it up already remarkably well for a first-year player,” coach Bertini said. “She’s already doing statistically far better than I would have thought for a player who didn’t get to play last year.”
Gray offered a few words of encouragement for her teammate. “Keep going, keep pushing,” she said. “Take more shots when she’s open.”
If that happens, maybe one day Hadla will be chasing another scoring record of her own.