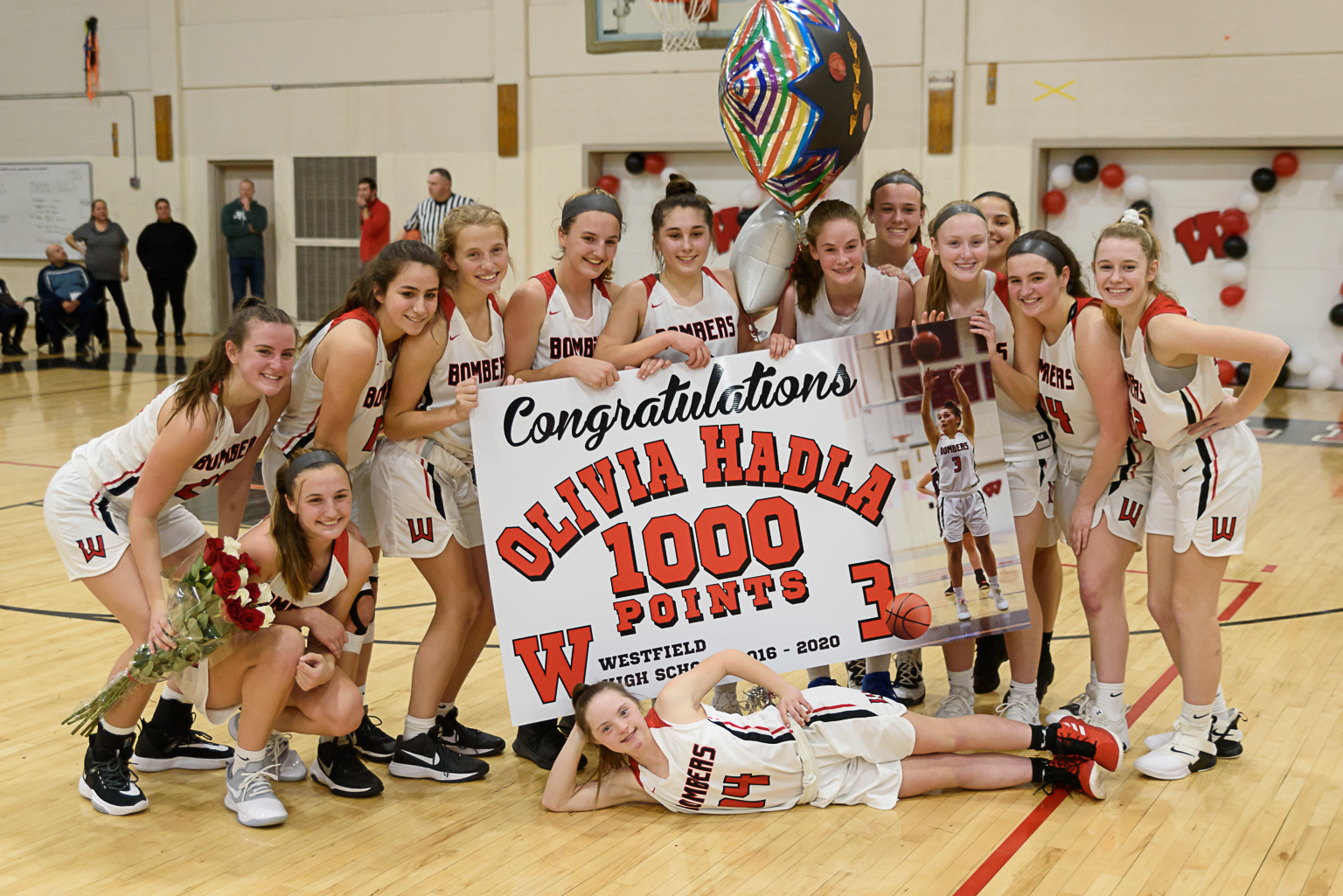 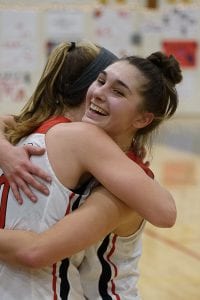 WESTFIELD – Jim Jachym … Mary Regan … Jodi Beach … Lori Mayhew … Manuel “Maui” Diaz … Alex Garstka … Olivia Hadla.
What do all seven of these people have in common? Each one of these former Westfield High School student-athletes has scored 1,000 points for the Bombers basketball program.
Tuesday, January 28 will forever be remembered as the day that Westfield High School girls basketball senior guard Olivia Hadla joined the 1,000 point club, soon to join an elite list on a banner in the rafters of the gymnasium, high above the “Bomb Squad.”
Hadla hit a three-pointer with 37.7 seconds remaining in the third quarter of Tuesday’s 57-36 loss to Minnechaug, scoring her 1,000th career point for Westfield on “Senior Night”. The senior guard was swept up in the arms of teammates, and a brief celebration ensued.
“It’s just crazy; it’s unreal,” Hadla said, amidst a sea of confetti and balloons. “I’ve been thinking about this since freshman year – before even that. …To finally get it done feels awesome. I’ve been playing with these girls since fifth grade. That’s our core group. Honestly, this feels great to have them by my side for the whole thing.”
Hadla entered the game needing nine points for 1,000. She inched closer and closer with each passing moment. 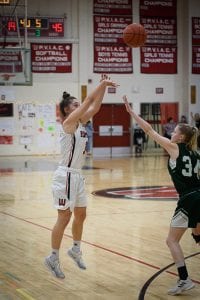 Midway though the opening quarter, Hadla cut Minnechaug’s early lead in half 10-5 with a nice baseline jumper. She made a lay-up with 4:37 remaining in the second quarter that pulled Westfield within 15-7. A free throw with 1:50 left in the half meant she needed just four points to reach the historic feat.
Late in the third quarter with Westfield trailing by double-digits, Hadla made a basket. Then, in the closing minute of the quarter, Morgan Fillion swung a pass to Hadla, who set up three feet from beyond the top of the arc and drained the three.
“I was like please just be the one so I can get it done with,” said Hadla, who became just the seventh 1,000 point scorer in school history and first female basketball player to reach the hallowed mark since 1991.
Jim Jachym is the school’s all-time leading scorer with 1,240 points, set in 1968. He was followed by Mary Regan (1974), Jodi Beach and Lori Mayhew (1991), Manny Diaz (2001), and Alex Garstka (2011).
“(Olivia) is special,” Westfield girls basketball head coach Dylan Willey said. “She makes plays that aren’t coachable. …Not only is she a good player, but teammates rally around her.”
Westfield senior guard Katelyn Flaherty did all she could to attempt to fire up teammates with an inspiring, emotional appearance in the game.
“It was awesome,” said Flaherty, whose smile radiated with happiness, following Tuesday’s historic event. “(Olivia) is my ‘BFF’.”