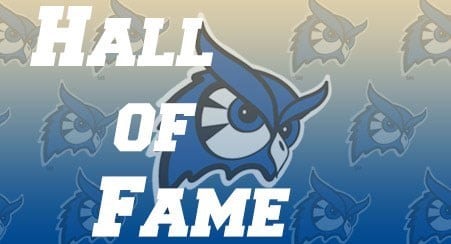 WESTFIELD – Four individuals and two “teams of distinction” will be honored by the Westfield State University Athletic Hall of Fame at an induction ceremony on October 19, 2018.
Retired football coach Steve Marino ’71, men’s basketball standout Tom Daviau ’74, field hockey player Megan (Wolski) Loftus ’08, and football pass rusher Jessie Holmes ’06 will be inducted as individuals, and the 1980 men’s track and field team and the 1981 field hockey final four teams will be recognized as well.
“I think the committee did a great job in selecting this year’s class,” said Westfield State athletics director Dick Lenfest. “The honorees named demonstrate both the breadth and depth of our athletic programs, and it’s important that we recognize the history of success among our student-athletes, teams, and alumni.”
Marino served 24 years as the head coach of the Owls football program. He presided over the Owls 2001 team that posted an unbeaten regular season record, won the New England Football Conference Championship game, and advanced to the NCAA playoffs for the first time in school history. Marino, a resident of Ludlow, Mass. compiled a 119-115-1 record before retiring after the 2013 season.
Daviau anchored the frontcourt for the Owls strong men’s basketball teams of the early 1970s, captaining the 1974 team which made Westfield’s first appearance in the ECAC Basketball tournament. He ranks among the program’s all-time leaders in free-throw shooting. A Shrewsbury, Mass., native who now resides in Flanders, N.J. Daviau will join several of his former teammates among the ranks of the Hall of Fame.
Wolski graduated as the field hockey program’s all-time leading goal scorer in both goals (60) and points (119), and holds a variety of school records. She was a three time MASCAC player of the year and played in the NFHCA National Senior All Star game. She currently resides in her hometown of Plymouth, Mass.
Holmes was a standout defensive end for the Owls in the early 2000’s who set the school record for sacks with 14 during the 2003 season. The Agawam resident was a two-time all-conference selection and was named as an All-East Region pick as a junior. He helped the owls to back-to-back Bogan Division titles and two NEFC championship games, finishing his career with 22 sacks.
The 1981 field hockey team holds special place in the history of Owls athletics, as the team posted an 11-5-2 record and advanced to the NCAA Division III final four, and Westfield State University hosted the inaugural NCAA Division III championship that year on Alumni Field. The team’s third-in the nation finish is the best ever by an Owls women’s team.
The 1980 men’s track and field team is perhaps the most successful of Hall of Fame coach Jerry Gravel’s teams. They won the inaugural New England Division IIII championship meet, produced All-American sprinter Russ Winchester, two past and future All-Americans, and multiple national qualifiers.
The induction dinner ceremony is scheduled for Friday, October 19 in the Scanlon Banquet Hall on the Westfield State Campus, as part of the University’s Homecoming weekend. Full biographies of the inductees and ticket information for the dinner will be announced in the coming weeks.
A total of 139 individuals are part of the Westfield State Athletic Hall of Fame, which began in 1994. The Hall of Fame started recognizing teams of distinction in 2017 with the first two teams honored at last year’s event. – Courtesy of Westfield State University Sports