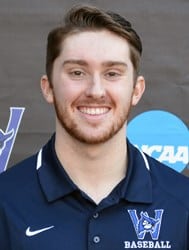 WESTFIELD – The Westfield State University athletic department has announced the hiring of former Westfield High Bomber Nate Barnes as a graduate assistant working as both an assistant baseball coach and in the sports administration office.
Barnes is a 2017 graduate from Westfield State, where he helped the Owls baseball team to a MASCAC tournament championship and NCAA Regional appearance this past spring as a graduate student. Barnes played four years for the Owls, appearing in games both on the mound and at first base. He ended up tallying a career 90 hits at the plate, while pitching 158 innings with a 3.47 earned run average and 100 strikeouts as a starter on the mound. His lone relief appearance came in the MASCAC championship game against Framingham State, where he went 2.2 innings allowing no runs on one hit, one strikeout, and a walk. Barnes led the Owls to a 92-60-1 record over his time there, captaining the team over his final two seasons.
Barnes was a business management major and communications minor during his undergraduate years at Westfield, making the Dean’s List every semester and finishing with summa cum laude honors (3.84 GPA). He will pursue a Master’s Degree in public administration over his time as a graduate assistant.
Barnes also played championship-level baseball and ice hockey for Westfield High School. – Courtesy of Westfield State University Sports