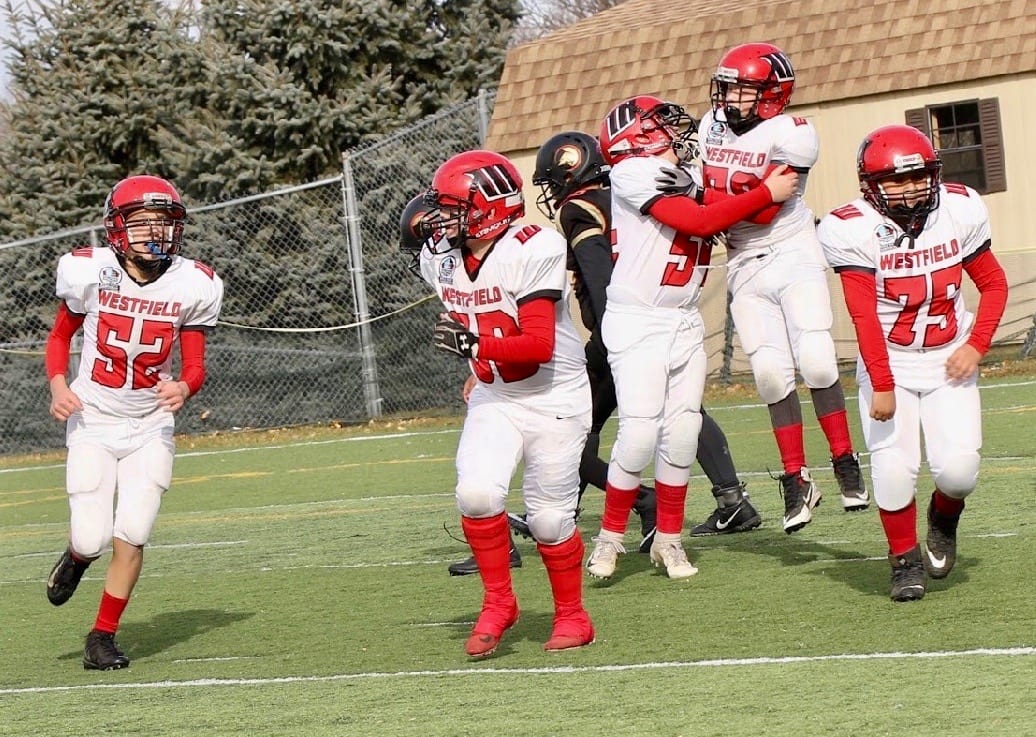 WESTFIELD – On February 3, 2002, the New England Patriots shocked the world by stunning the St. Louis Rams 20-17 in Super Bowl XXXVI, setting off a change in the culture surrounding our region’s pro football team and setting up a dynastic run.
Like that historic moment in New England sports lore, generations of football players in the Whip City might look back on last weekend as an epic game-changer heard round the world.
On Saturday, the Westfield Youth Football Junior Bombers outlasted Upper Cape 19-14 to capture the Pro Football Hall of Fame Northeast Regional 11U title in Sparta, N.J.
With the victory, Westfield earned the right to advance to the Pro Football Hall of Fame World Youth Championships Dec. 14-17 in Canton, Ohio.
Westfield is the first New England area football team to win a trip to nationals. 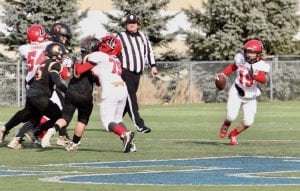 “(Our players) are fast and athletic and have the highest IQs I’ve ever had at this level,” Westfield Junior Bombers head football coach Troy St. Pierre said. “They don’t have it in their heads to lose.”
The Westfield Youth Football Junior Bombers, comprised of some 30 local fifth and sixth graders, are soaring way above and beyond anyone’s expectations.
Westfield won a matchup of unbeatens in the SAFL Super Bowl on Nov. 10, defeating Holyoke 28-8 to improve to 10-0.
“In the Super Bowl, when everyone doubted us – everyone from the other teams doubted us – we beat them by a lot,” Westfield middle linebacker Cooper McNamara said.
Westfield was the first team to score on Holyoke all season.
“We were the underdogs,” Westfield offensive lineman Thomas Lenston said. “Holyoke hadn’t gotten scored on once, and we broke that.”
In the regional semifinals, Westfield overcame a team from Glenridge, N.J., that went 32-1 over the last three years. Junior Bombers quarterback Jaxson St. Pierre (7 carries, 95 yards) and running back Lucas Guay (10 carries, 110 yards) each scored a touchdown and combined for more than 200 yards rushing.
Westfield defensive tackle Liam McElhiney had a key sack, and defensive backs Nick Guay and Josh Castell provided outstanding pass coverage on third and fourth down late in the game to preserve the victory.
McNamara finished the game with five tackles.
“I think academically we’re a very smart team with all of our formations and calls on offense and defense,” Jaxson St. Pierre said.

In the finals, Westfield stood up to an Upper Cape Spartans squad that featured eight linemen each weighing more than 200 pounds, most of whom were nearly six feet tall.
St. Pierre (185 passing yards, 120 rushing yards) rushed for a 10-yard touchdown and tossed a 38-yard TD pass to Nick Guay (3 rec., 84 yards). Lucas Guay had a nice all-around effort, rushing for 70 yards and a touchdown and finished with 76 receiving yards. Jeremiah Charbonaue also had a reception for 20 yards.
Westfield’s undersized offensive line of Liam McElhiney, Nick Gauger, Declan Connally, Thomas Lenston, and David Sarmiento, which averages just 125 pounds per player, proved to be the difference.
“The linemen … those guys were way bigger than us,” Jaxson St. Pierre said. “I love how we beat up on them. It was pretty fun.”
McNamara, Drew Masters and Josh Castell stood out defensively, combining for multiple tackles for losses.
“It’s all from the composure and communication we have,” McNamara said, explaining the reason for the team’s unwavering success. “We all pick each other up as a team when we get down, and when we get back up, we never stop.” 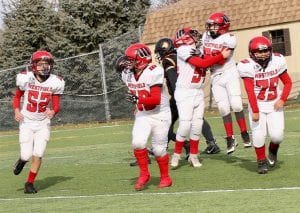 Said McNamara: “We’re like a family. It’s like second families to us. We play hard and don’t stop.”
Westfield has not stopped to let the opposition catch its breath at all this season. The Junior Bombers run a no-huddle offensive attack that averages close to 34 points per game. On average, they outscored their opponents 34-4 during the regular season.
“This team runs – to a tee – what our high school offense runs,” coach St. Pierre said. “(Westfield High School head football coach) Rob (Parent) is extremely excited to get this group of players in a couple years. Everyone is talking.”
I want to correct something I stated earlier.
It actually should come as no surprise that this Westfield Juniors Bombers team has accomplished as much as it has this season.
Westfield won a 7-on-7 tournament in the spring, and a vast majority of the players participated in summer clinics and camps all summer long.
“In August we are already a well-oiled machine,” coach St. Pierre said. “That’s a credit to (our players) and their parents.”
It does not stop there though.
While severe heat and inclement weather dampens or even cancels practices for several area youth football teams, Westfield does not miss a beat because it has the luxury of utilizing the indoor practice facilities at Roots Athletic Center.
“It also helps that as a youth coach I am also a high school coach,” coach St. Pierre said with a wry smile.
St. Pierre is the assistant coach for the Westfield High School football team.
The stiffest test facing the Westfield Junior Bombers might be the challenge of raising $50,000 to fund their nationals trip to Canton, Ohio.
The team will host a pasta dinner at Shortstop Bar & Grill in Westfield on Sunday at 5 p.m. The cost per meal is $20. Local dignitaries are expected to attend.
Also, anyone interested in donating money is urged to visit the “Help the WYF Junior Bombers go to Nationals in Canton OHIO” Facebook Page. A “GoFundMe” account has been set up to help defray the costs associated with the trip to the Hall of Fame. 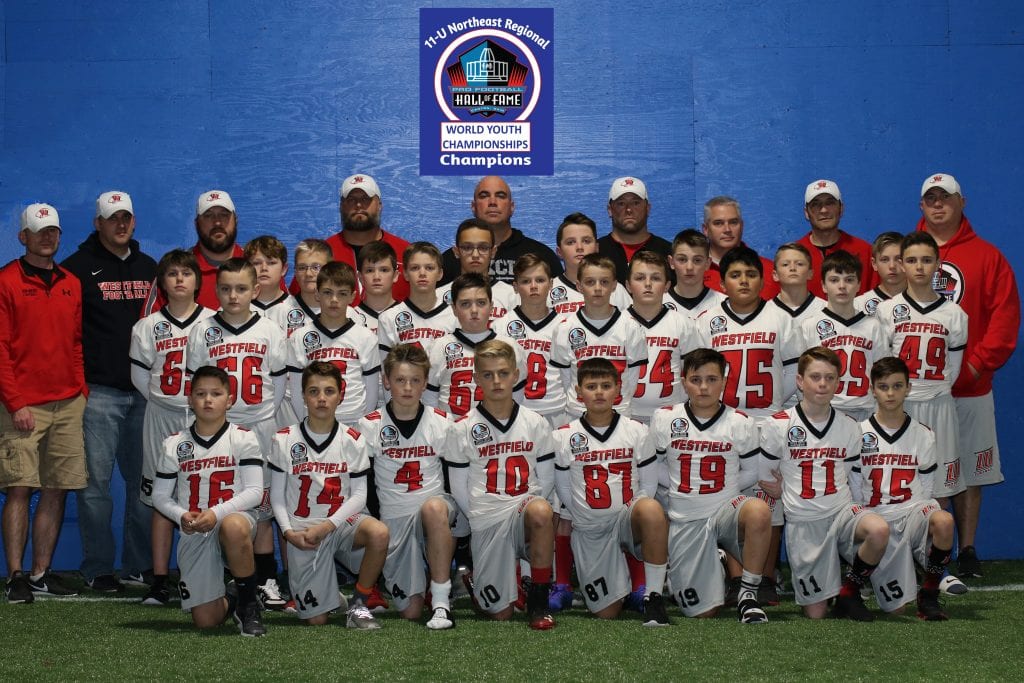