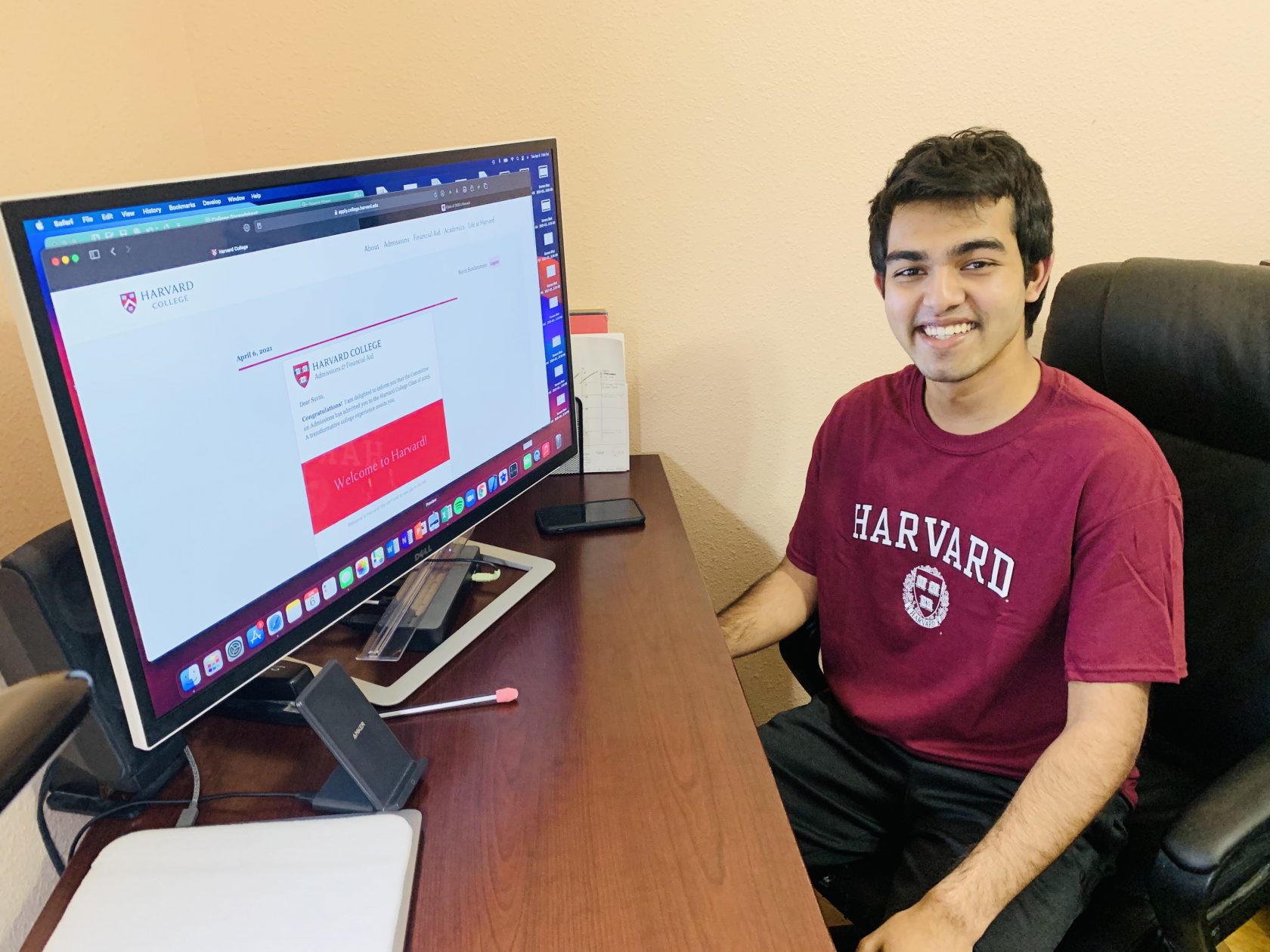 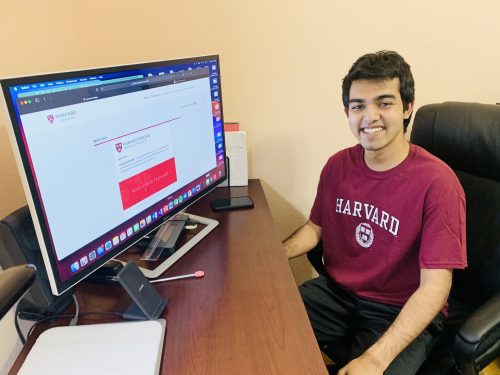 Suvin Sundararajan (WHS Class of 2021) upon learning of his acceptance to Harvard. (PHOTO SUBMITTED)

“I did not expect to get in. I applied at the last minute,” Sundararajan said. He said he just received a box this week with a Harvard insignia hat and wallet.

Sundararajan said “to call COVID challenging is an understatement. It was pretty close to a disaster with so many events piling on each other.”

He said he also struggled with online learning. “My grades were perfectly fine, but it took a lot more effort on my end and it was a lot harder. When I was in school I was able to listen better. In the short term, it worked well, but it was hard to sit on the computer for seven hours straight. WHS did the best they could – I was really glad that they supported me,” Sundararajan said.

He said he was approaching burnout around December and January when he had no decisions, and didn’t know where he would be going. “I made it through with my time management,” he said, adding that his guidance counselor Kristen Puleo helped to keep him on track with all of his applications.

Then Northeastern University and John Hopkins accepted him in March, and Duke University also gave him an offer — then Harvard. “Harvard gave me an excellent deal — charged me a fourth of the price and made it way cheaper, I don’t have to graduate in debt after four years. I’m lucky I got an option where the financial aid worked,” Sundararajan said, adding, “I was really happy. I didn’t even notice the financial aid offer until afterwards.”

“My goal is to major in bioengineering [also known as biomedical engineering], with a minor in computer science,” Sundararajan said. He said Harvard has a brand new science and engineering building, that is right next to the business school, which has him even more excited. “Harvard has an amazing campus,” he said.

Sundararajan has achieved local fame through his successes in the Science & Engineering Fair, where he worked on biodegradable plastics and filament for 3D printers, this year adding a liquid-based component. His work, some of which was done in laboratories at UMass, earned him a spot in the International Science and Engineering Fair in Phoenix, Arizona in his sophomore year, where he was awarded Second Place in Chemistry as well as an Air Force Special Award. In his junior year, he also qualified as a finalist for the ISEF, which was canceled. This year, he was named among the top 300 scholars in the Regeneron Science Talent Search 2021.

He is now moving beyond the world of science fair for his project, which he said has major real-life applications.

Sundararajan said in an interview that he didn’t care about Harvard’s prestige, but the opportunities that it offers. He has already reached out to make a connection with the business school and the new science school. While attending Harvard, he will also be eligible to dual enroll in MIT courses.

“If I hadn’t gotten deferred at MIT, I wouldn’t have looked at the entrepreneurial side of Harvard. That deferral motivated me and got me thinking about new options,” he said, adding that Harvard has a smaller engineering community. “If anything, that deferral helped me figure out what I want to do.”

“I really want to thank Mr. Tyler, Mrs. Sweeney, Mr. O’Neil, and my professor Todd Emrick for writing recommendations, and especially Ms. Puleo, my guidance counselor. All of my teachers and mentors were all very supportive,” Sundararajan said.

“I want to thank my family for their extensive support and for bringing me to where I am today,” he added.