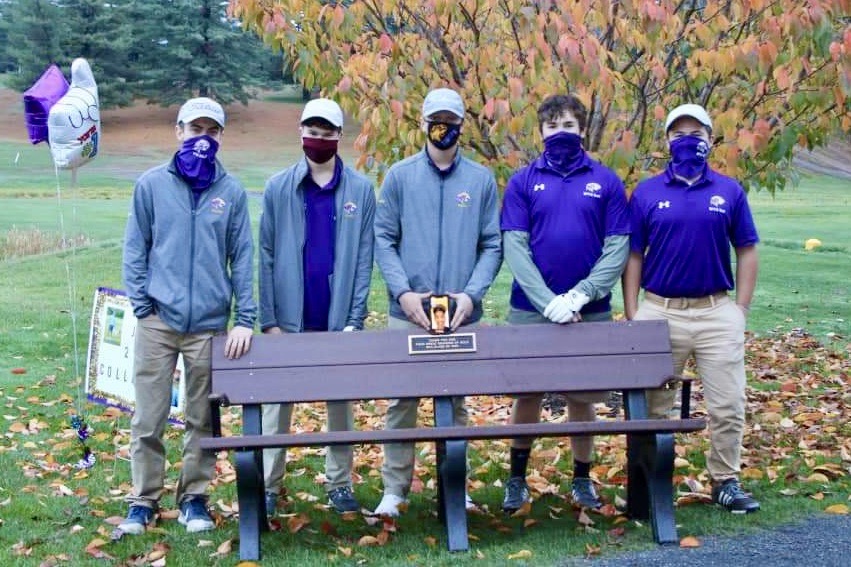 SOUTHWICK – Despite the uncertainty of a high school golf season for Southwick Regional High School over coronavirus concerns, the Rams finally had their first match Sept. 29. On Nov. 4, one day after the presidential election, they concluded what many may consider a hugely successful season, considering everything thrown at them.
To cut down on travel, Southwick competed in a geographic “bubble” specifically designed by the Pioneer Valley Interscholastic Athletic Conference, The Rams “bubble” also included Westfield, West Springfield, Agawam, Holyoke, Hampshire, and Northampton.
All scoring in PVIAC was changed to medal play, combining the best 4-of-8 rounds to determine a winning team score.
Once Southwick finally hit the course, the Rams lost a close home opening match to a strong Westfield team by four strokes. They rebounded with home wins over Division 1 foes, West Springfield and Agawam, before losing to Oak Ridge by one stroke.
“(That was) a real heartbreaker,” Southwick golf coach Joseph Whalen said.
After soundly losing to Westfield at Tekoa Country Club, Southwick responded with wins against Hampshire and West Springfield, the latter being a tough course at Springfield Country Club, where the Rams posted solid scores from their top four players. 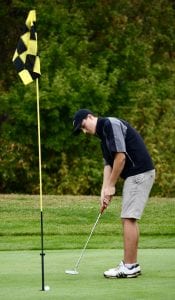 Southwick then suffered a four-stroke home loss to Northampton which came down to the final hole for a number of Rams golfers.
Unfortunately, two of Southwick’s final four matches – both against Holyoke – were canceled due to COVID restrictions surrounding the City of Holyoke.
Southwick’s season concluded with a road split, defeating Hampshire and losing to Northampton Wednesday, the latest the golf program has ever played into the calendar year.
Although Southwick’s final record of 5-5 appears quite average at first glance, if one looks closer there is much more above-average play below the surface.
Three of five Southwick losses were by a combined total of nine strokes. Rams No. 1 golfer Matthew Garrity was solid again all season long, finishing with a strong 38.7 average. Juniors Jesse Johnson and Andrew Morris and 10th grader Matt Coviello had some solid rounds.
“The future looks bright,” Whalen said.
Eighth graders Joey Malkoon, Brian Macintosh, and Josh Drumm; and ninth grader Evan Michelucci varsity level play earned them what Whalen said was “valuable experience.”
Ashley Squires also contributed to Southwick’s team success this season, appearing in five varsity matches.

Westfield Technical Academy vs. St. Mary’s
Rather than playing a routine match, the St. Mary’s and Westfield Technical Academy high school golf teams agreed to end the season with a friendly scramble recently at East Mountain Country Club.
“We wanted to do something fun as a lot of (golfers) from both teams were friends,” Westfield Technical Academy golf coach Bob Eak said. “We felt it was a good way to send the seniors off in this strange year without having played for anything such as a league title or Western Massachusetts tournament berths.”
Opponents became teammates as the two schools paired up their No. 1 and No. 4 golfers, their No. 2s and No. 3s, and so on, making two-man teams with a player from each school on each two-man team.
The golfers went off in groups of four, playing the front nine.
“It was a fun way to mix the teams and yet still have a competitive ‘match,’” coach Eak said.
No winners were announced, but seniors were honored after the match.
St. Mary’s seniors Manny Umana, Ryan Sweeney, and Kegan Foley participated in the match. Westfield Tech seniors in attendance included: Trent Adam, Jake Collier, Nick Moran, Riley Sullivan and Gabe Wakelin. Tigers senior Hunter Loomis was unable to attend the final match.
Coach Eak congratulated the seniors on their accomplishments, which included a successful season, and thanked the parents and the team’s Booster Club for their continued support. The seniors also presented a park bench to East Mountain Country Club owner Ted Perez for his continued support of the team.