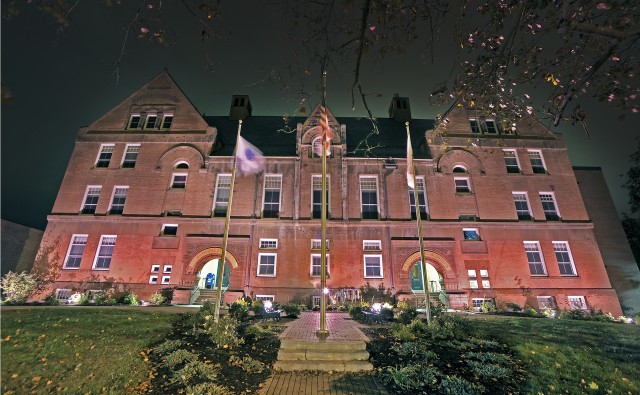 WESTFIELD- A virtual tour of Westfield City Hall will soon be available after members of the Historical Commission completed a walk-through of the building and took photographs last week.

Historical Commission Chair Cindy Gaylord said March 25 that the online city hall tour was nearing completion. This comes less than a month after the Noble and Cooley Drum Factory virtual tour was completed.

Historical Commission member Michael Ingraham said during a recent commission meeting that he was putting together the vignettes and scripts for the tour.

The virtual tours function in a similar way to Google Street View. There are many stations throughout the tour that one can “walk” to by pressing arrows to move through the building and listen to the narration.

The photos were taken by Southwick photographer Fred Gore. The narrator has not been selected yet, according to Gaylord. Jay Pagluica of Gaslight Entertainment narrated the Noble and Cooley Drum Factory tour.

Westfield’s City Hall offices have been located at 59 Court St. since 1958. The building was first constructed in 1889. It first served as the home to Westfield Normal School, now known as Westfield State University. At the time, women from across Massachusetts would come to Westfield State to intern as school teachers.

Previously, city business was conducted at Town Hall on Broad Street. City Hall once served as the location for the Westfield Police Headquarters beginning in 1958.

Gaylord did not announce an exact date for the online release of the tour, but she indicated that it would be completed soon.