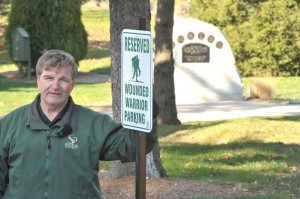 WESTFIELD – Veterans visiting Stanley Park now have the option of using the new Wounded Warrior parking spaces.
Stanley Park President Robert McKean, a Vietnam-Era Air Force veteran, said creating the spaces was a way to give back to those who have served.
“It’s a small way to say thank you,” he said.
While many wounded veterans have handicap placards, others were injured in different ways.
“There are other ways to be wounded, besides the physical disabilities,” McKean said. “This way, veterans can come to the park with their families and have a special place to park.”
Wounded Warrior parking is not common yet, but it’s spreading across the country.
“I’ve seen this elsewhere and it’s something that I wanted to do,” McKean said, noting that Wal-Mart stores around the nation have Wounded Warrior parking.
Wounded Warrior Project (WWP) began when several veterans and friends, moved by stories of the first wounded service members returning home from Afghanistan and Iraq, took action to help others in need. What started as a program to provide comfort items to wounded service members has grown into a complete rehabilitative effort to assist warriors as they recover and transition back to civilian life. Thousands of wounded warriors and caregivers receive support each year through WWP programs designed to nurture the mind and body, and encourage economic empowerment.
In Stanley Park, spaces were designated in the Veterans Memorial, playground, and rose garden parking lots.
McKean served in the United States Air Force and said he was lucky, but has buried many friends wounded in war. He also was a wreath bearer at a few Air Force Full Honor Wreath Ceremonies at the Tomb of the Unknown during his tenure as a member of the US Air Force Presidential Honor Guard and served at the funeral of FBI Director J. Edgar Hoover.
“I stood at the corner of his casket,” he recalled.
The real heroes, said McKean, are the soldiers who were in the jungles of Vietnam and the desserts of Iraq.
“But the World War II veterans are the ones who are my personal heroes,” McKean said.
McKean is proud to have Wounded Warrior parking, especially in time for Veterans Day, and said the park has another honor coming next month.
“We were approached to be part of Wreaths Across America and I didn’t blink when I said yes,” said McKean.
Stanley Park was selected, he said, partly because of the Veterans Memorial located there.
“We have the seal of all six military branches, including the Merchant Marines that finally received veteran status,” said McKean.
Trucks filled with wreaths will parade from Maine to Arlington Cemetaery, making stops along the way that include Stanley Park and West Point.
McKean said being selected is “an honor” and he hopes to have residents, including children, lining the streets when the parade drives through the city.
The wreaths are set to arrive in Westfield on Dec. 11 and anyone interested in learning more and being part of the ceremony should visit
www.stanleypark.org or call 568-9312.