WESTFIELD – Keefe Tech scored two goals in the first half and tallied three more in the second en route to a 5-0 shutout of Westfield Technical Academy in the state vocational boys soccer tournament final Thursday at Jachym Field.
Westfield Tech played well through the game’s first 15 minutes, and held tough until Keefe started pulling away. 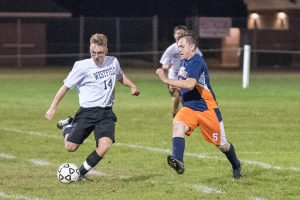 Simion Mocanu fires the ball towards the goal for Westfield Tech. (Photo by Bill Deren)

“(We) fell apart after we went down a goal or two,” Westfield Tech coach Kyle Dulude said. “We stopped playing possession and panicked. Each time we tried pushing forward they were ready to attack back right away. They did a great job flicking passes around the defense and beating our keeper with accurate shots from the top of the box.”
A senior-laden Keefe Tech took a 2-0 lead on a nice set piece as Westfield Tech lost track of their marks.
“We definitely had breakdowns due to lack of communication in the back,” Dulude explained. “Their experience took over as the game went on. …Simply put, things didn’t go our way.”
Westfield Tech will now attempt to regroup and focus its attention on the upcoming Western Massachusetts Division 4 tournament. The fifth-seeded Tigers (16-3-1) will travel to Drury Monday to take on the No. 4 Blue Devils in a quarterfinal game, beginning at 2:30 p.m.
“There was a lot of emotion after the game and it was great to see they cared,” Dulude said. “I told them that if these emotions are real we can learn from this experience and play better in our game Monday. …These kids have a chance to play more soccer.” 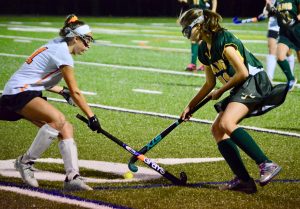