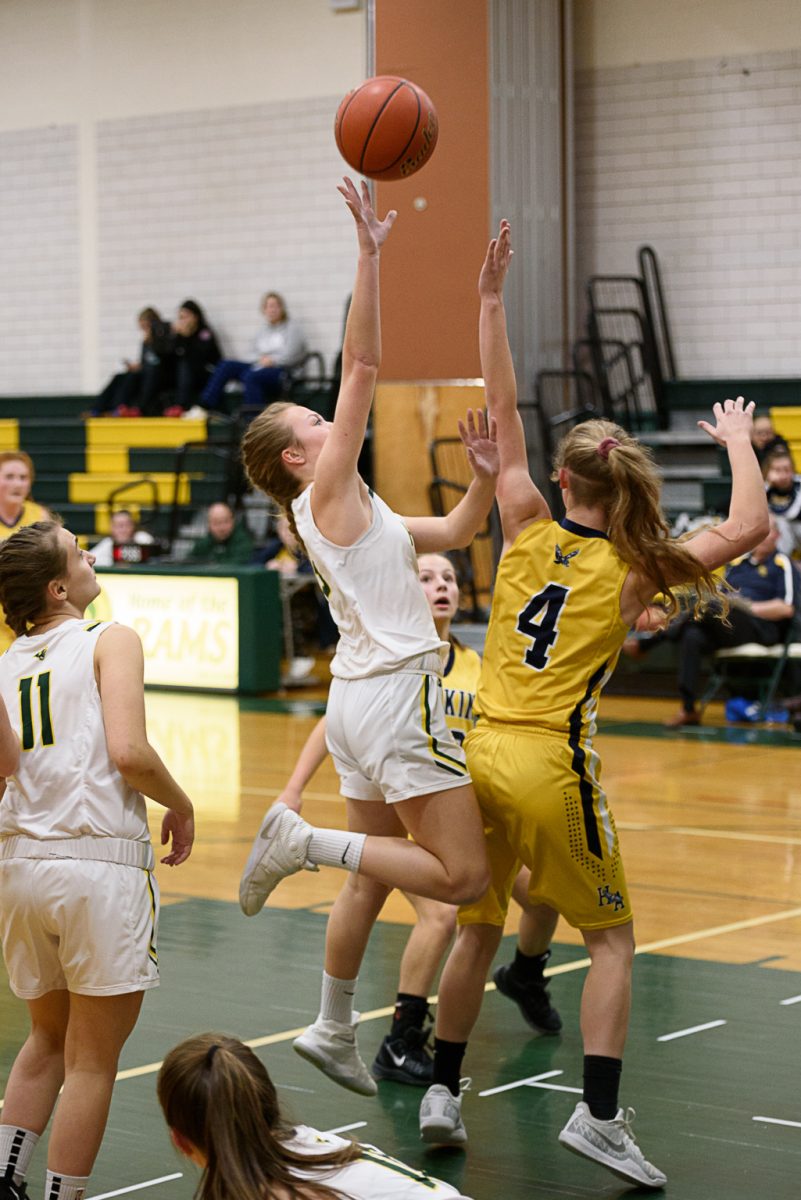 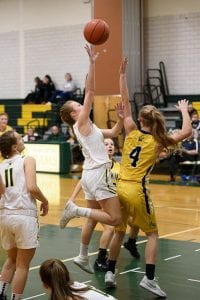 Emily Martin (5) tosses one up for Southwick.

SOUTHWICK – Close but…
Southwick put forth a furious 15-point, fourth-quarter rally, rallying to within five points late in a high school girls basketball game Thursday night but fell short at home to Hopkins Academy, 30-21.
Emily Martin led the way for Southwick with 10 points. Kathleen Shea and Hannah Burke scored four apiece, and Maura Wurster had three.
“I’m very proud of how we ended the game,” Southwick girls basketball assistant coach Nick Tosoni said. “Our defense helped us score by turning the ball over and scoring on fast break points.

SKI RESULTS
Saints dominate again in race #2
It was another great night for the St. Mary’s Saints on the slopes at Berkshire East in Charlemont Thursday.
The St. Mary’s girls ski team had their best finish thus far this season, placing third in the division. The Saints were again led by Chloe Lussier (38.79), who finished fifth overall and second in the division, Elianna Umana Kimura (22nd overall, 11th division) and newcomer Audrey Burke (15th division).
“The Lady Saints are starting to show some strength,” St. Mary’s ski coach Andy Lussier said. “Chloe had a great run tonight. She attacked the flat and was clean on the steep. This was a great race for her and she needed to get a good race under her belt.
On the boys side, St. Mary’s was the fastest team on the hill for the second straight Pioneer Valley Interscholastic Athletic Conference race, also finishing first in the division.
“The giant slalom is the great equalizer,” coach Lussier said.
St. Mary’s placed four skiers in the top 15 overall for the second consecutive time. Jack Masciadrelli led the Saints with a second place showing and top division finish.
Masciadrelli recorded a time of 24.67. Only Amherst’s Nico Christakos (24.52) was better.
“(Jack) put down a good run and was one of the fastest out of the start and through the flats,” coach Lussier explained.
Manny Umana Kimura finished eighth overall and fourth in the division.
“He’s been really working hard on his skiing and it is starting to pay off for him,” Lussier said of Kimura.
Hayden Lussier (11th overall, 6th division) and Colin Freeman (15th overall, 7th division) also continue to ski well for St. Mary’s.
Southwick’s Aiden Mapel finished 10th on the slopes with a time of 25.92.