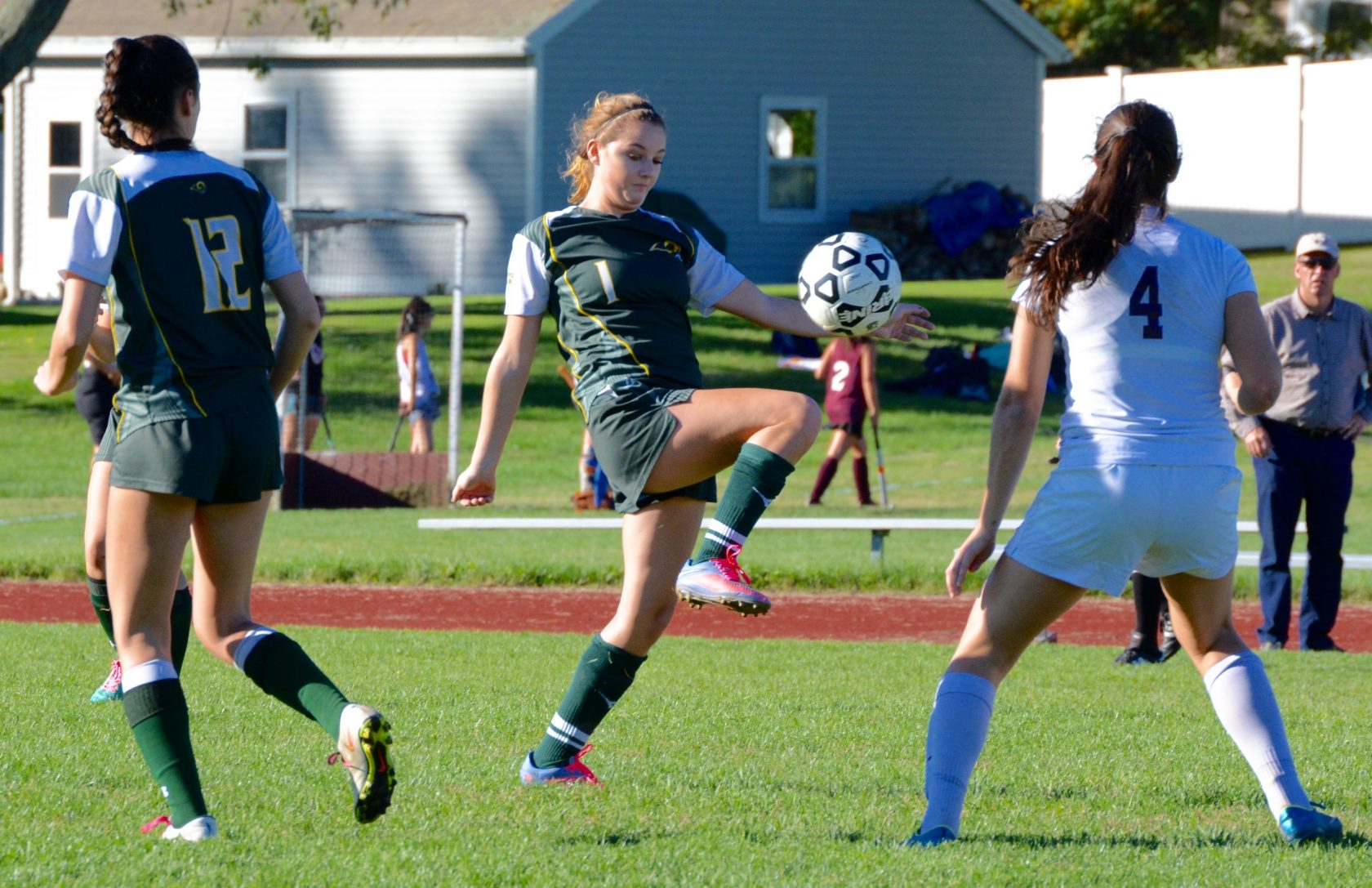 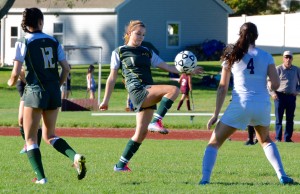 Southwick’s Sam Perusse (1) makes a move with the ball against Amherst. (Photo by Chris Putz)

AMHERST – All eyes for Southwick were on one Hurricane Thursday, and she was not named Matthew.
Amherst senior forward Sage DeChiara recorded a hat trick – scoring three goals – and the Amherst Hurricanes defeated the Southwick Rams in a girls’ soccer team Thursday.
“We couldn’t put the ball in the net,” Southwick coach Todd Downey said. “It wasn’t really anything they did, except for that one player, Sage … Defensively, it was a little bit uncharacteristic of us.”
Alex Mello put Southwick out front early with a goal in the fifth minute. Amherst surged ahead with three straight goals. Mello’s second goal pulled the Rams within one of a tie in the 55th minute. Five minutes later, Amherst reclaimed a two-goal lead. An own goal resulted in the final score of the game.
Hannah Garrish made eight saves in net for Southwick (5-3-2).

Saints fight back
Renaissance 4, St. Mary 0
St. Mary goalie Aisling Butler made 16 saves, and St. Mary’s Madie Donais turned away several Renaissance scoring opportunities.
It was an improved effort for St. Mary, which lost to Renaissance 10-1 in their first meeting of the season.

BOYS’ SOCCER
Bombers knot Blue Devils
Westfield 2, Northampton 2
For the second straight game, an opponent swooped in for a game-tying goal in the waning minutes to tie Westfield.
“Having a team tie it up in the last 10 minutes of the game two games in a row is pretty gut-wrenching,” Westfield coach Andrew Joseph said after Northampton scored a game-tying goal late in regulation. The Gateway Gators tied the Bombers earlier this week with a late second-half goal.
Northampton scored the game’s first goal on a corner kick about 10 minutes in. Ryan Prenosil tied it four minutes later when he took a great combo feed from Aiden Dunn and Tyler Stanton. Stanton sent a nice cross to Prenosil.
Dante White scored off a nice individual effort from Sam Winiarski five minutes into the second half for a 2-1 lead.
“At that point, things were going really well for us,” Joseph said. “I think maybe because we scored so early in the second half, maybe we thought the game is over.”
Northampton took advantage of the brief letdown by Westfield in the closing minutes, mounting an offensive push to tie the game 2-all with 10 minutes remaining.
“It’s important against, just like against Gateway, that we bounce back and move on to the next one,” Joseph said. “That will be our challenge, and I’m sure our guys will do it.”