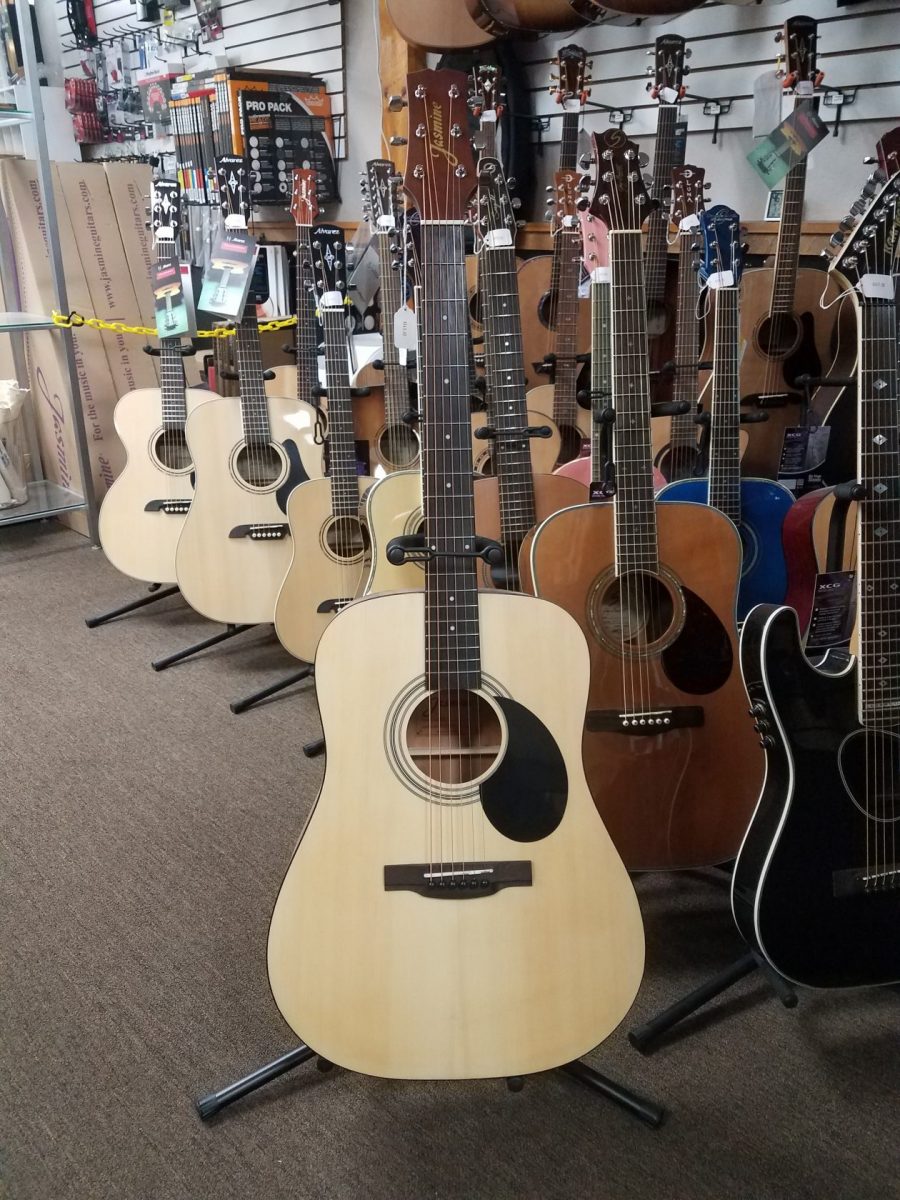 WESTFIELD-As Small Business Saturday draws near on Nov. 28, local business owners including Doug Cotton at Whip City Music on Elm Street are gearing up with special sales.
“We’ll have extended hours on Small Business Saturday this year, opening from 10 a.m. until 8 p.m.,” said Cotton.
Cotton has planned several “specials” on Nov. 28, including the Jasmine S35 Dreadnought acoustic guitar, regularly $149, with a sale price of $99. Also, he will sell a Snark SN-5X electronic tuner for $9.95, regularly priced at $12.95, and Bach valve oil, a 1.6-ounce bottle, at a sale price of $3.
“We’ll also have some unadvertised specials in addition to these,” he said.
For parents considering introducing a child to an instrument, Cotton suggests a recorder or ukulele for younger children. 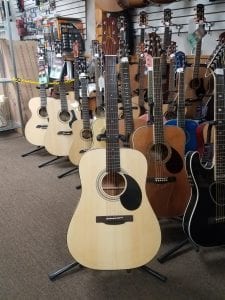 “It’s important to engage children at an early age to nurture an interest in music, not only by giving them an instrument to play but also by exposing them to a wide variety of music,” said Cotton.
One of the questions Cotton is often asked by parents is whether a child should begin with an acoustic guitar rather than an electric one.
“Honestly, they can learn on either one, but get them the one they’re most excited about,” said Cotton, adding, “that increases the odds that they’ll keep at it.”
Cotton is also planning on extended hours as the days get closer to Christmas.
“As we came out of the shutdown, sales on guitars and many instrument accessories were very brisk,” said Cotton, adding, “That seemed to continue until around the time the Federal Pandemic Unemployment Assistance ended.”
Cotton noted that instrument repairs has remained steady throughout the year.
“An area that surprised us was school band instrument rentals,” said Cotton. “Returns from students who began last year were very high, and we expected new rentals this year to be sluggish.”
Cotton said that while the numbers were lower than a normal year, “We did see much more than we anticipated.”
Cotton added that the pandemic has created a difficult situation for students just beginning in band.
“We hope that parents will do what they can to help keep their children interested in music and music education,” he said. “As we look down the road, fewer musicians starting out now will impact us all many years into the future.”
Cotton works with musicians to ensure there are options for people of all ages to learn how to play their favorite instrument.
“As we got into the shutdown, which was only initially expected to be a couple of weeks, we just postponed classes,” said Cotton. “As the shutdown began to drag on we took a sampling from our students, but didn’t see a large amount of interest in virtual lessons.”
Cotton noted that since the teachers are all independent contractors, he chose to encourage them to consider private lessons.
“When things get back to normal we’ll naturally invite all of our teachers and students to return,” said Cotton. “We have recently started some limited in-store lessons, just one teacher and one student in the store at a time in a large room with a large sneeze guard and masks.”
By the beginning of 2021, Cotton is hopeful he will have some adjoining rooms ready to go with windows and filtered sound holes so he can expand the lesson programs.
Current shop hours are 11 a.m. – 4 p.m., Tuesday through Saturday.
“We’re often here on Monday as well, but it’s posted as closed, so give a call,” he said.
While customers like to touch and try out instruments, Cotton said he is discouraging that avenue right now because of the pandemic.
“Sadly, we’re discouraging doing so since any instrument that is played needs to be sanitized after, and there just isn’t enough staff to do that,” he said. “We, of course, will let people play a guitar they’re truly interested in buying, and we can also demo the instrument for them.”
Cotton noted that musicians – and in turn music stores – have been “hit hard” economically by the epidemic.
“Two of our local music stores have closed, and we also see Guitar Center entering Chapter 11,” said Cotton. “In addition, the supply chain is a real mess.”
Cotton said that while supplies have improved since the weeks just after the shutdown, he expects stores to run out of stock for Christmas.
“So we hope you’ll support your local music store and other businesses but do your shopping early to avoid missing out on a better selection of products,” he said.