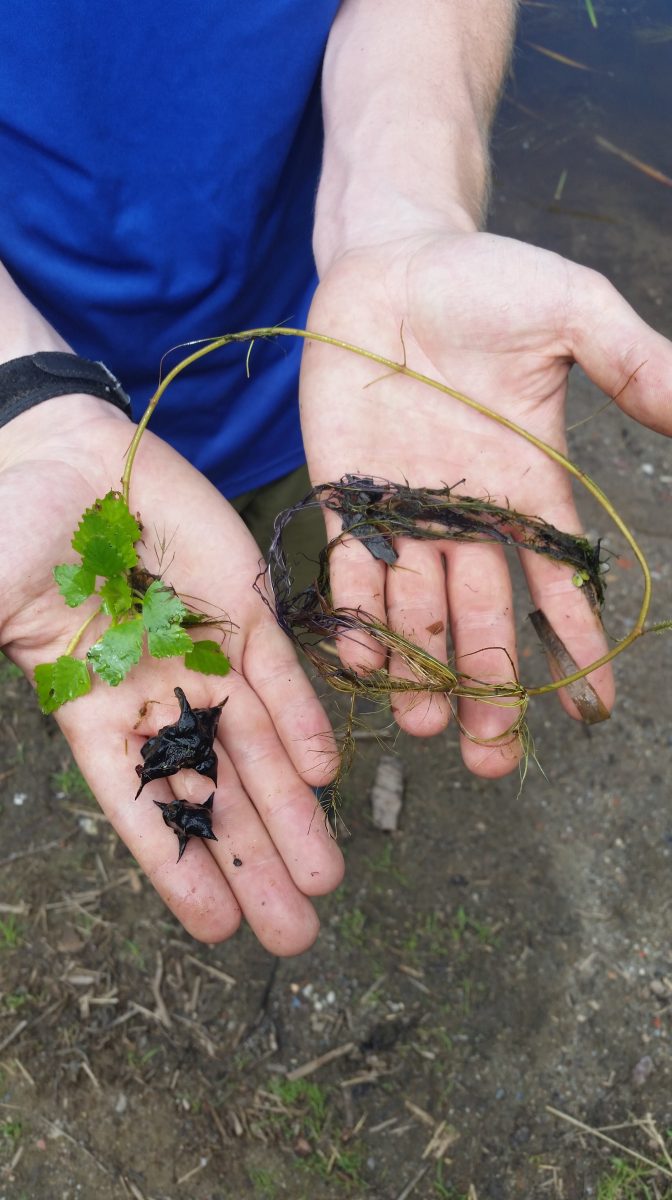 An intern from the SCA holds the leaves and seeds from the water chestnut (L) in his hand, along with the root system (R) that is pulled out of the water. (THE WESTFIELD NEWS FILE PHOTO)

WESTFIELD – The Conservation Commission heard a report on March 23 from Cynthia and Jeff Boettner on the success of invasive water chestnut removal at the Brickyard Ponds, located on both sides of Root Road.

Commissioner Thomas Sharp introduced the project, saying it began five years ago with a group of volunteers and the support of the Conservation Commission and Mass Fish & Wildlife. He said the report was informational. “I wanted the rest of the Conservation Commission to be aware of a huge environmental win,” he said, adding that without permission from the landowners, the project would not have happened.

Cynthia Boettner, retired coordinator of the Silvio O. Conte Fish & Wildlife Refuge in Sunderland, and Jeff Boettner, who worked on invasive insects for the last 32 years, also retired, started working on the project in 2015.

Cynthia Boettner said she had been working on water chestnut removal on sites throughout the Massachusetts watershed, with Westfield the furthest west of the sites. She said water chestnut grows from seed on the bottom of a lake to a 16 foot depth, producing an easily identified rosette which floats on the surface, and can produce ten to 20 seed pods hanging underneath, and each seed can produce ten to 15 plants. She said it doesn’t take long for the plant to take over a lake.

“It’s bad for recreation, bad for wildlife, and hard to get under control,” Boettner said, adding that it produces a dense cover that blocks sunlight, kills native plants, and depletes the oxygen in the water.

Boettner said when it gets too dense, mechanical harvesters can be required to cut the plants out. She said Vermont has already spent over $4 million to remove the invasive from Lake Champlain.

“The idea is to catch infestations before getting to that size,” she said. Her project found success in having volunteers pull out the plants by hand, which cuts back on the amount of seeds that are deposited.

Conservation Coordinator Karen Leigh was originally contacted by an angler in 2014 about a growing infestation in the Brickyard Ponds, a series of 17 ponds on one side of Root Road and 21 on the other side of the road. When asked to consider the project, Boettner said she got permission in 2015 to go to the west side ponds from the homeowners, and found many of the ponds had very little water chestnut, and some were totally inundated.

In 2015 and 2016, all of those ponds were cleared out, Boettner said, with the help of Leigh, the Youth Conservation Corps of the Connecticut River Watershed Association and other volunteers. She said they had a shallow boat taking the plants from the volunteers to the road, where dump trucks were stationed by the Department of Public Works. The effort took out 18,000 pounds in 2016 with 700 volunteer hours.
Since that year, the number of pounds have gone down significantly, with 247 pounds removed in 2020.

In late 2018 and 2019, Eagle Scout candidate Philip Hall took on continuation of the project with his Boy Scout Troop 104. Philip Hall and his mother have now become the site’s stewards, according to Boettner.

Jeff Boettner took on the worst impacted ponds on the east side of the road, which were inundated to 20 percent. He said that this year the effort should nearly clear the ponds, but it’s important to pull out the plants beginning in June, before the seeds begin to develop.

“This really has been the biggest success story of all the 25 sites I have worked on, thanks to the dedication of all the people involved,” Cynthia Boettner said. She said in the early year, many, many volunteers were needed, but there is no need for that many people anymore.

“Thanks to the Halls, especially Philip and Liz and to Jeff for dedicating so much time and effort to this,” she said. Sharp also credited Leigh, who was involved in the project from the very beginning.

Conservation Coordinator Meredith Borenstein then said the commission had received a letter from another abutter on Root Road, Constance Adams regarding the project. She said Adams was on the call, and asked her to read from the letter.

“We are writing to request that we receive notice in advance of any reports on Brickyard Ponds. At the very least, we would expect to be permitted to view any reports in advance. If we’re not provided that opportunity, we won’t have the opportunity to have a say regarding our own property and interests,” Adams said.

Adams said the Brickyard Ponds are on personal property. “We carry the liability, and expect no decisions to be made without our permission and input,” she said. She said they have problems with anglers, drug users, solicitation, and garbage dumped on the property. She said people are careless and have drowned in there before.

“We don’t want anyone in there at all,” Adams said. She said the ponds are man-made, filled up from the old brick yards. When the culvert in the road gets blocked her land gets flooded with water and garbage.

The Boettners said they would notify the abutters of any work that will be done this summer to pull the plants. Jeff Boettner said they will be working on the project in the first week in June, the third week in June, once in July, and once in August. “Then we’re done,” he said.

Borenstein said there is a current permit for the work, which is good until mid-July. “At some point, there will have to be a (new) permit. This was an informational talk to update the commission; no decisions are being made. We’ll have to continue to figure out where the water chestnut is going to go,” she said.