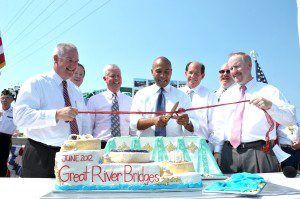 WESTFIELD – A project which has been talked about for decades and actively underway for five years came to a formal end yesterday with an extended ceremony to dedicate the new Great River Bridges and associated parks on both sides of the river.
The celebration started with a noontime hot dog social on the south side of the river and ended with a concert featuring the Boot Hill Band.
In between, public officials ranging from Governor Deval Patrick to Westfield State University President Evan Dobelle gathered on the north side of the river to recognize many of the groups and individuals who have contributed to the effort, which began in earnest under the leadership of former Mayor Richard K. Sullivan.
State Sen. Michael R. Knapik, who served as master of ceremonies, noted that the celebration came “five years, almost to the day” after Patrick visited the city for a groundbreaking “here, roughly where we’re sitting.”
Knapik called the effort “an incredible example of a federal, state and local partnership from the start of the project to the end of this project.”
When Patrick took the podium he drew chuckles when he started by saying “It’s hot so I’m going to tell you that what is represented in your program as an address, I’m going to reduce to remarks.”
He went on to note that he has been back to the city since the ground breaking and said “I’ve struggled with getting form one side of town to the other during the construction, not quite like all of you, but certainly I’ve had the experience.”
He lauded the contributions of the “Greatest Generation” and went on to say “it’s time to bear our generational responsibilities … to leave things better for those who come behind us.”
Patrick went on to say “I’m proud to have had a role, with local government, with the federal government, with all of the partners who have helped this project, and projects like it around the Commonwealth, come into being.”
Patrick was introduced by Sullivan, his Secretary of Energy and Environmental Affairs, who called the project an example of “planning for the long term” typical of the Patrick administration and said “The most important part of this project, I believe, are the parts of the project that are the new parks.”
He said, “The parks bring us back to the river, it connects the north side of the city to the south side of the city” and said that the project is “an opportunity to redefine the city of Westfield’s downtown.”
When the current mayor spoke, Daniel M. Knapik said “This is a spectacular day for the city of Westfield” and went on to say “The legacy of this project is that it will not only move traffic in an efficient way for the next generation, it has also ushered in a new era where we embrace our beautiful and wild and scenic Westfield River.”
He said that, with the public investment in the city, “private investment will follow and all along this corridor we’re seeing private investment follow.  We’re seeing, right now, between nine and ten million dollars of private investment.”
He went on to say “We have never seen so many developers interested in doing business in the city of Westfield.”
He also said that the investment in the city will continue and noted “In the next couple of weeks the contractors will be arriving to start the work on the Pochassic bridge.
When Patrick was asked about that project he deferred to his transportation secretary, Rich Davey, who said “We’re looking forward to starting that.”
He said “We’ve already awarded the contract and we’ll have work out there probably within the month.”