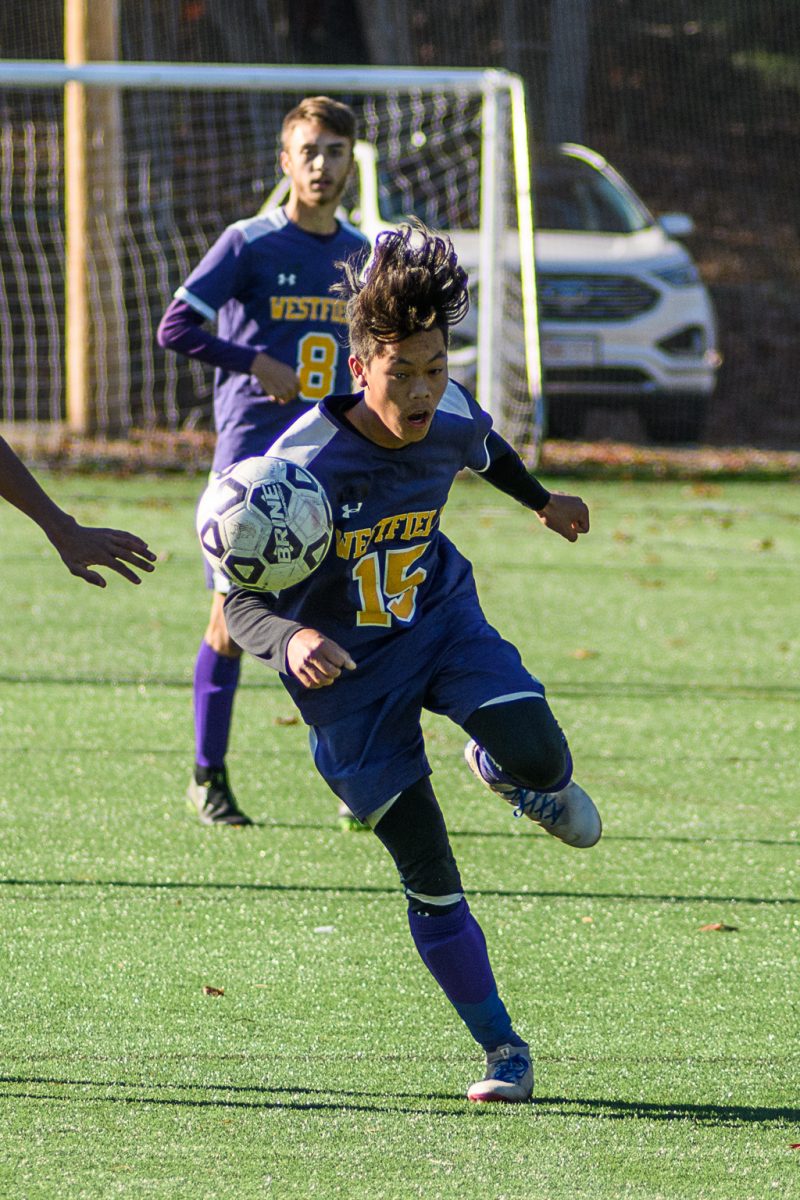 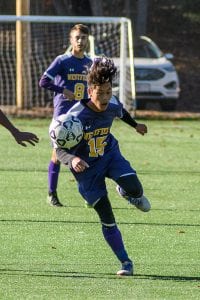 WESTFIELD – Halloween was a day earlier, but for one local team a treat quickly became a very mean trick.
Keefe Tech scored two goals in the final five minutes to stun Westfield Technical Academy 2-1 in the MVADA boys soccer championship Friday afternoon at Roots Athletic Complex.
All of the scoring came in the game’s final 12 minutes as Westfield Tech (17-2-1) took the first lead on a goal from Ruvim Vdovicheko in the 68th minute, sending the largely home crowd into a frenzy. Adam Strycharz assisted.
The Whip City celebration would be short-lived.
Seven minutes later, Joseph Wood notched the equalizer for Keefe Tech, burying a shot off a pass from Siad Nunez.
Keefe Tech kept at it. With just two minutes remaining in regulation Vitor DeAssuncao lofted a high floater into the near side of the net just above the goalie’s outstretch hands for the game-winner. Stephen Merino assisted.
“We beat them for 75 minutes of the game,” Westfield Technical Academy boys soccer head coach Kyle Dulude said. “Unfortunately, the last five minutes was the difference.”
Westfield Tech let up just three goals all season, but somehow Keefe Tech had found a way to score two in a five-minute span.
“This will be a test of our character,” coach Dulude said.
Westfield Tech will have several days off to regroup before kicking off the Western Massachusetts playoffs.
“If we want to put a band aid on today’s loss, we need to show up for the Western Mass. tournament,” Dulude said.

FOOTBALL
Central 58, Westfield 0
Everything Central touched turned to gold.
Central touched the ball eight times in the first half, scoring seven touchdowns and overpowering Westfield (5-3) Friday night at Bullens Field.
On their second play from scrimmage, Central freshman quarterback Willliam Watson connected with senior running back Andre Ellison for a 30-yard touchdown pass.
Westfield’s second possession resulted in an interception as Central freshman Josiah Griffin returned the ball 50 yards for a touchdown.
Central’s next three offensive plays also resulted in touchdowns – a 64-yard TD pass from Watson to senior Isaac Boston, a 29-yard TD run from junior running back Marcus Crawford, and a 47-yard TD run from Ellison.
Westfield went 3-and-out after Ellison’s score. Central junior Tyson Thornton returned the punt 50 yards for a touchdown.
Central forced another 3-and-out. The Golden Eagles scored yet again on their first play of their drive when Boston ran 30 yards for a TD.
In the second half, Central scored twice more – one touchdown coming on a Watson to Griffin 4-yard pass; the other on a two-yard run from Frank Velazquez.
Westfield rested several of its key players against Central with the postseason just a week away.