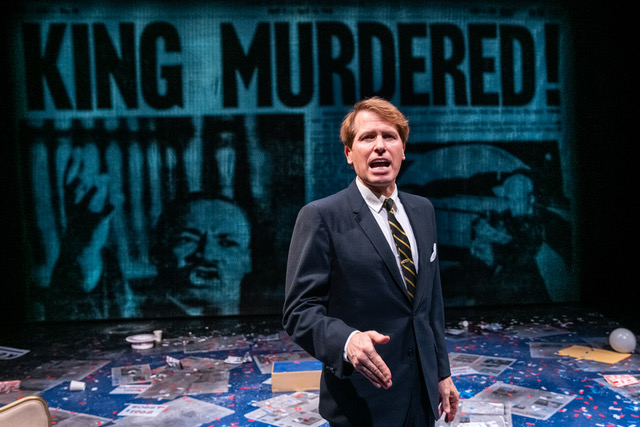 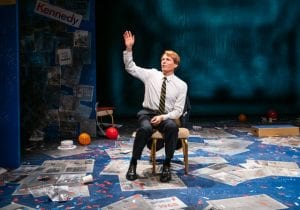 David Arrow’s Kennedy: Bobby’s Last Crusade is a one-man portrait of Robert F. Kennedy streaming at Playhouse on the Park.

The area theatre season has opened virtually, as companies around the region attempt to reimagine theatrical performance amidst new restrictions and new parameters. Kudos to Barrington Stage and Berkshire Theatre Group, who brought our regional national attention, as they staged live plays and musicals outdoors. Well, temperatures are falling, and theatrical activity moves indoors—to living rooms or alternative spaces everywhere.

Playhouse on Park opens its new season with the streaming of a play filmed onstage. It’s easy to get tickets. You go online, purchase a ticket, get a link to a website where you can stream the play at your convenience to your smart tv, computer, tablet or phone. Once you have the link, there’s a time limit from your first click until you have to complete (or not) the show. You can dress as you please, eat as you like, and there are no fees for parking, expensive dinners, etc. So, with this new “go to the theatre” program in place, I cast my first review of a performance, where I’m not sitting in two on the aisle.

David Arrow’s Kennedy: Bobby’s Last Crusade is a one-man portrait of Robert F. Kennedy, and his brief run for President in 1968. America is seething with tension and division. Camelot had crashed five years earlier with the assassination of Kennedy’s brother JFK. The unpopular Vietnam War is dividing Americans, and the incumbent president, Lyndon B. Johnson, is unpopular with the populace. Racial tension is smoldering beneath the surface, often exploding, as people take to the streets. (In some ways, very similar to today’s climate). 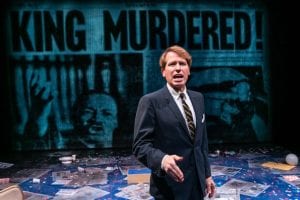 RFK’s race to grab the Democratic nomination is an uphill battle, even though his political platform is solid. In a short couple of months, once LBJ decides not to run, RFK is up against Eugene McCarthy and an up-and-coming Hubert Humphrey. And, America’s racial divide explodes when Dr. Martin Luther King is assassinated. I should have been more aware of the details, because all of this was unfolding as I was in high school at the time and old enough to remember, but blissfully unaware of things beyond the high school musical, prom, and graduation.

Arrow combines speeches Kennedy actually gave on the campaign trail, with asides about his reactions to his successes on the road, his thoughts about his family, from Ethel and the kids to his late brother to Jackie. The 90-minute portrait is taut, yet balanced. Arrow gives a dynamic solo performance. James Morgan’s set design comes to life with Kathrine R. Mitchell’s projections, as the action moves quickly from campaign stop to stop. Ben Scheff’s sound design enhances the rhythms set by Arrow and director Eric Nightengale, and Miriam Nilofa Crowe provides some solid lighting design. The production is well-filmed, and I forgot that I was streaming a play from another space.

Solo performance is an art, and I’m constantly amazed when actors get it right, like Tara Franklin in Chester Theatre’s On The Exhale or Hershey Felder in his portrayals of Gershwin, Berlin and Tchaikovsky. David Arrow is up there with the best of them. He captures the Kennedy accent effortlessly, and carefully balances the public RFK, sincere and confident, with the private, more unsure RFK behind the scenes of the campaign stages.

Kudos to David Arrow and company for dramatizing moments in our not too distant past, which bear so many similarities to the issues facing us a half century later. Kudos to Playhouse on Park for bringing this play to area audiences. Kennedy: Bobby’s Last Crusade is an excellent evening of theatre (or morning or afternoon, depending on when you choose to stream it). Since we’re all experiencing new ways to experience theatre, this production and performance is an excellent introduction to the new way of looking at things.

Mark G. Auerbach studied theatre at American University and the Yale School of Drama. He has worked for arts organizations and reported on theatre for newspapers and radio. Mark produces and hosts ArtsBeat TV/Radio for WCPC15 and 89.5fm/WSKB and is a contributor to Pioneer Valley Radio.