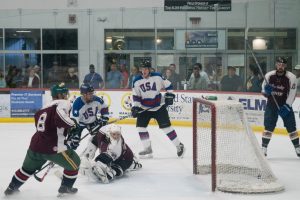 WESTFIELD – Organizers for the upcoming seventh annual Kevin J. Major Memorial Hockey Tournament have released the official schedule of games, and there is a lot to look forward to.
The tournament, which begins Mon., Aug. 7, features a total of 49 games and culminates with three championships – the Old Boys, Social, and Pro divisions – all at Amelia Park Ice Arena.
A full evening of Social division action with get things started Monday night. Lumberjacks-Firtion Adams begins at 7 p.m., followed by Tommy Car-Quack Attack at 8, Ice Cats-Ice Hawks at 9, and Cool Running-Whip City at 10.
Games continue every night of the week until Sat., Aug. 12 when a slate of 15 consecutive games takes over the rink from 7 a.m. to midnight. There will be a an official “welcome ceremony” Saturday at noon, introducing the Kevs Foundation and recognizing all of those associated with keeping the legacy of Kevin Major ongoing. Seven Automated External Defibrillators will be presented to various local non-profit sports organizations.
The tournament is held in honor of Kevin Major, a Westfield student-athlete who passed away in 2011 at the age of 19 from sudden cardiac arrest.
The games will conclude Sun., Aug. 13 with the Old Boys, Social, and Pro division championships at 4, 5, and 6 p.m., respectively.
For the complete schedule of games, check out Saturday’s print edition of The Westfield News.