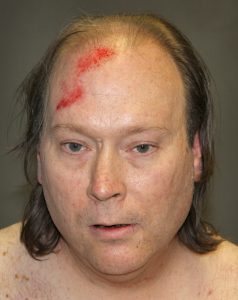 WESTFIELD — An apparently unprovoked and senseless assault on a convenience store clerk sent the clerk to hospital Monday morning and activated the Police Department’s Special Response Team to take the suspect into custody.

A clerk from the New Corner Variety Store on Crown Street called police at 8:07 a.m. Monday to report that he had been assaulted by a knife-wielding regular customer whom he identified.

Although initially reported to be a robbery, a review of the store’s security video showed that the suspect, promptly identified as a regular customer, Bruce K. Wilder, 49, of 16 Montgomery St., Westfiled, came around the counter “swinging a knife at the clerk, striking the clerk” according to a court document.

Police Capt. Stephan K. Dickinson reports that the 56-year-old victim was stabbed in his left hand as well as in his right shoulder and chest. He was transported to Baystate Medical Center in Springfield by a Westfield Fire Department ambulance.

The suspect was considered to be dangerous and, in accordance with department policy, the Special Response Team was called out to assist with the effort to take Wilder into custody.

The SRT, commanded by Police Sgt. Seth Florek, is specially trained to deal with unusual threats, and assisted detectives as they sought to serve a warrant at the man’s Montgomery Street address, which is less than a quarter of a mile away from the scene of the crime.

The officers took Wilder into custody and detectives executed a search warrant which revealed a “seven-inch black and silver” knife which may have been the weapon used in the assault.

Wilder appeared in Westfield District Court later on Monday before Judge John McKenna, charged with assault and battery with a dangerous weapon (with serious bodily injury) and assault with intent to murder.

McKenna allowed a motion by Wilder’s court-appointed defense attorney, John Kavanangh, for an evaluation to determine his client’s competency to face the charges, and Wilder was transferred to Bridgewater State Hospital for a 20-day evaluation.

McKenna also allowed a motion by Assistant District Attorney Andrew D. Ott to hold Wilder without the right to bail pending a hearing to determine his potential dangerousness to the community. That hearing is scheduled for Nov. 8.