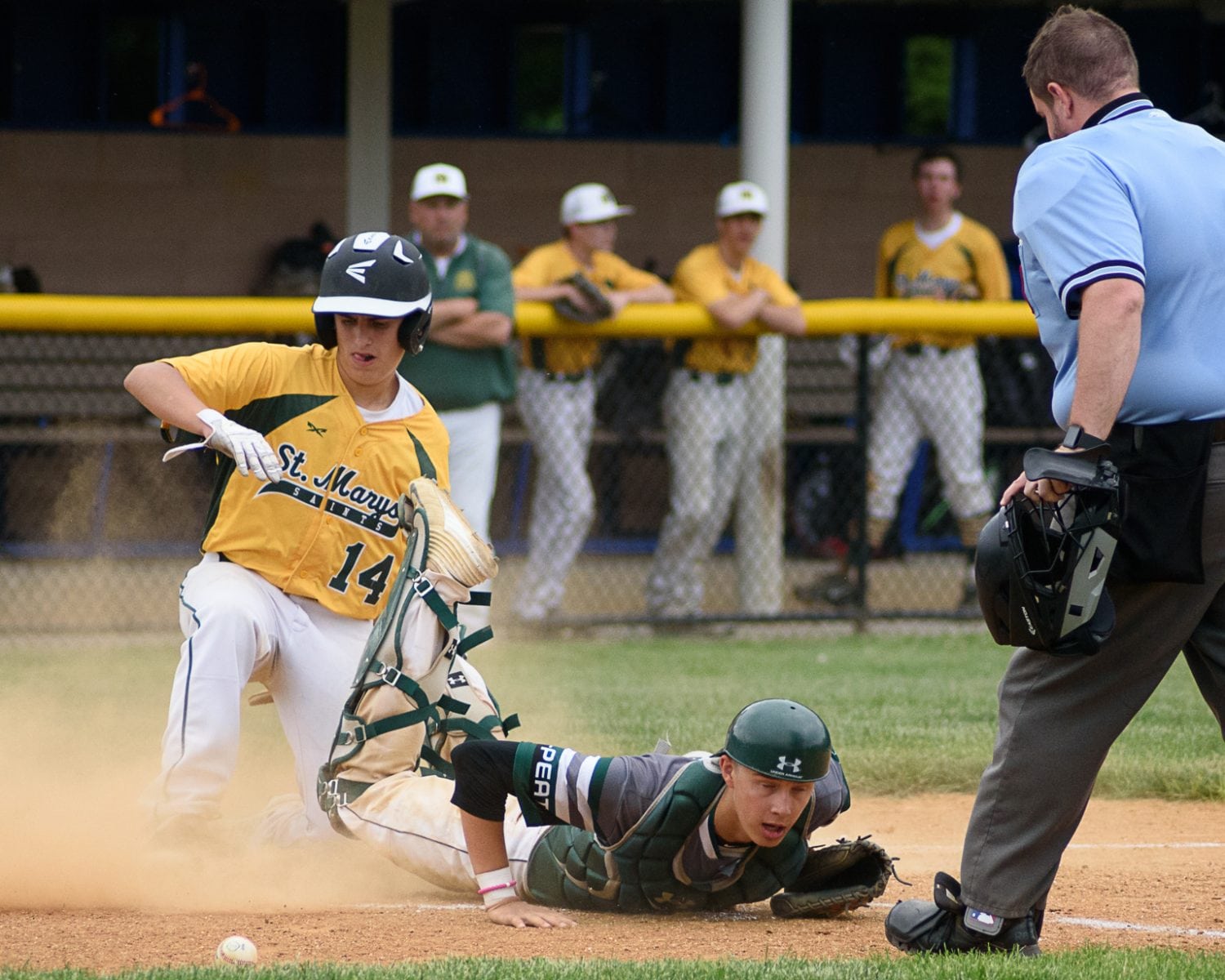 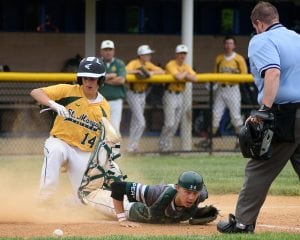 WESTFIELD – The West Division 4 baseball semifinal lacked in drama, but that was much to the delight of the St. Mary’s Saints.
No. 3 St. Mary’s launched an 18-hit attack, four of which went for extra bases, and the defending Western Massachusetts champion and reigning state champion Saints mauled the McCann Tech Hornets 20-7 Wednesday at Westfield State University’s Bud and Jim Hagan Field.
“This group’s been special all the way through,” said a jubilant St. Mary’s baseball head coach Troy Collins, whose team returns to the finals Saturday at the University of Massachusetts-Amherst.
St. Mary’s (16-7) will take on top-seeded Hopkins (16-4). First pitch is at 10:30 a.m.
“We tell them (at the beginning of the season,” coach Collins said “if they come, have fun, and do the fundamental stuff for the game, they’ll have success and that’s what’s happening.”
It may seem like an eternity since the first pitch of Wednesday’s game, but McCann Tech, in fact, actually enjoyed a lead in the game.
With two outs in the first inning, McCann Tech’s clean-up hitter Logan Tower drove a double to the left field corner. A bloop single to shallow left-center field from Jacob Field made it 1-0.
McCann Tech threatened to expand its early lead. Field stole second base, and Robert Matte III put together a nice piece of hitting, driving a ball through the right side. St. Mary’s pitcher Jack Masciadrelli bounced back though to strike out the next batter and leave runners stranded at the corners.
St. Mary’s bounced back though in true Saintly fashion. 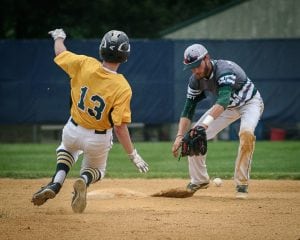 Jake Butler got things started for the home town team in the top of the second with a single to left field. Quinn Powers was hit by a pitch. Kevin Rockwal singled to center field to load the bases. Andrew Florec hit a sac-fly RBI to left field to tie the game 1-all. Jack Lamirande moved the runners over a base with a perfectly placed sac-bunt. No. 9 batter Aidan Burke then beat out a hit near the second base bag, scoring two runners for a 3-1 lead.
St. Mary’s broke the game open with four runs in the fourth, and punched their trip to the finals with seven more in the fifth.
Rockwal walked to lead off the fourth inning. Florec reached on an error. A one-out hit deep on the left side of the edge of the infield grass loaded the bases. Matt Masciadrelli was hit, forcing in a run. With two outs, Butler plated two runs with a line drive to left field. The Saints led 7-1.
Rockwal drew a walk, Florec singled, Lamirande advanced the runners with another well-placed bunt. Burke walked to load the bases. Matt Masciadrelli launched a two-run single into left field, Jack Masciadrelli followed with an RBI single, and stole second. Hunter Authier clobbered a double to left field for one run; Butler drilled a triple to left field for another. Rockwal put the ball in play, and reached on an error to make it 14-1.
The scoring did not end there though.
St. Mary’s pushed a total of six more runs across in the sixth and seventh innings. The big hits came from Matt Masciadrelli (2-run single), Authier (RBI double), Butler (RBI triple), and Jack Masciadrelli (RBI double).