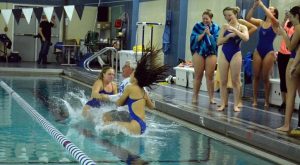 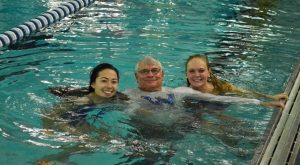 Sophomore Kelsey Johnstone (Southwick/Westfield, Mass.) won the 100 and the 200 freestyle, and junior Shannon Fitzsimmons (Andover, Mass.) won the 100 butterfly and the 500 freestyle, and freshman Kait Kelly (Minnechaug/Hampden, Mass.) claimed first in the 50 butterfly and the 100 backstroke.
For Western New England, Kayla Snider won the 200 IM in 2:26.26, and the quartet of Erika Sheinhait, Lauren Mangiaratti, Jackie Peterson and Emily Elliott won the 200 free relay.
Laing has been the only head coach in the history of the swimming and diving program at Westfield State, starting the program in the 1982-83 academic year. He has led the Owls to 24 straight winning seasons and has a career record of 200-116-1.
Westfield State will be back in action on Saturday, competing at Mount Holyoke College at 1:00 p.m. – Courtesy of Westfield State University Sports