WESTFIELD – Westfield State University will travel to play Messiah (Pa.) College in the opening round of the 2017 NCAA Division III women’s soccer tournament Saturday, November 11th in Mechanicsburg, Pa. Game time is set for 11:30 am at the Shoemaker Field.
The Owls will have a challenge on their hands in facing Messiah, long one of the strongest programs in NCAA Division III soccer. The Falcons are currently the 10th-ranked team in the nation. Messiah advanced to the NCAA Championship game last season, have won five national titles and have advanced to the final four on 12 occasions. 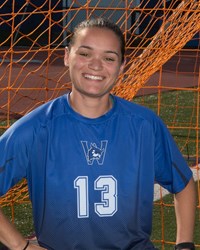 The Owls earned an automatic bid to the NCAA’s as the Massachusetts State Collegiate Athletic Conference tournament champions, defeating Worcester State in the title game, 2-1.
Westfield State is making its sixth appearance in the NCAA Tournament, all in the last ten seasons. The Owls last advanced to the NCAA’s in 2015, and the Owls advanced to the second round of the NCAA’s in 2012 after winning a penalty kick shootout at Stevens Institute of Technology in Hoboken, N.J.
Westfield has scored 45 goals this season (number 82 in Division III) but they fire at will to the tune of 22.37 shots per game and 11.47 shots on goal per game, both number 19 in the nation.
Owls’ sophomore midfielder Bella Eduardo (Springfield, Mass. / Chicopee) was named the 2017 MASCAC Women’s Soccer Player of the Year.
Eduardo leads the Owls with 14 goals this season and 34 points. Her 14 goals are the ninth highest single-season total in school history. Eduardo was the league’s rookie of the year and a first team selection in 2016. She has 20 goals and 11 assists for 51 points in her two-year career at Westfield.
Freshman defender Lydia Kinsman (Granville, Mass. / Southwick) is the 2017 MASCAC Women’s Soccer Rookie of the Year. Kinsman brought an immediate impact on the Owls’ lineup as a defender, a free kick specialist, and with her ability to go forward and attack. Kinsman has two goals and four assists for eight points this season.
Joining Eduardo and Kinsman in the Owls success is senior midfielder Rene Hamel (Minnechaug HS/Hampden, Mass.) and sophomore midfielder Marissa McGue (North Quincy HS/Quincy, Mass.). Hamel, a transfer who previously played at NCAA Division II Southern New Hampshire, has totaled two goals and led the conference with ten assists for 14 points. McGue totals five goals, four assists and 14 points while patrolling the central midfield for the Owls. Both Eduardo and McGue have four game-winners on the season.
In 19 games played this season, Westfield State’s junior forward Nicole Chretien (North Attleboro, Mass.) has five goals and ten points while junior defender Casey Rotti (Rutland, Mass. / Wachussett) earned Tournament MVP honors in the Owls’ 2-1 MASCAC Tournament victory over Worcester State. On the season, Rotti has totaled two goals, three assists and seven points.
In 14 starts this season, junior goalkeeper Natalie Falcone (Sutton, Mass.) has a goals against average of 0.86, a .814 save percentage and 72 total saves.
The Owls finished the season with an 11-5-3 overall record, and a 6-1 mark in the MASCAC under 13th year head coach Todd Ditmar.
The Messiah Falcons enter the Tournament with a 14-2-3 overall record, and they went 7-0-1 in the MAC Commonwealth regular-season.
Messiah’s selection comes by way of an at-large bid after they were upset in double-overtime (1-0) by Arcadia in the MAC Commonwealth Championship on Saturday. Prior to the loss in the conference final Messiah had gone unbeaten in 14 games (13-0-1) with 13 shutouts.
Messiah leads the nation with a 0.151 goals against average thanks to allowing just three goals all season. The Falcons also hold a 0.906 save percentage as a team, good for fifth in Division III.
Freshman goalkeeper Lydia Ewing (Palmyra, PA / Mount Calvary Christian School), the MAC Commonwealth Rookie of the Year, leads all Division III goalies with a 0.183 goals against average.
Messiah’s defense is led by two-time MAC Commonwealth Defensive Player of the Year junior DJ Cole (Lebanon, PA /Cedar Crest), who shifted from the midfield to center-back this season. Cole, senior Lydia Eichorn (Lexington, OH / Mansfield Christian), and senior Skylar Ulry (Charlotte, NC / Covenant Day School) start in front of Ewing and have helped hold opponents to just 4.4 shots per game.
The Falcons have collected 16 shutouts thus far, including a stretch of 12-straight that was the third-longest streak in program history.
Falcons’ sophomore forward Brooke Firestone (Dover, PA / Dover Area) leads the team with eight goals and ten assists on the season, while and sophomore forward Megan Mansfield (Mechanicsburg, PA) totals eight goals and five assists. Firestone and sophomore midfielder Sunny Gelnovatch (Earlysville, VA / Albemarle) have both netted five goals and five assists on the season while freshman midfielder Abby Monko (Dillsburg, PA / Northern) has four goals and three assists.
The winner of the Westfield-Messiah game will face the winner of Rowan University and Scranton University on Sunday, November 12th at 1:30 p.m.
Rowan (12-2-3) earned an at-large bid from the New Jersey Athletic Conference after falling to Montclair State in the conference semifinals, 0-0 (2OT, 4-2 PK). This marks the 13th appearance for the Profs in the NCAA Tournament, including three-straight and 12 of the past 13 seasons.
Rowan is seventh in the nation with a 0.282 goals against average, and they’re sixth with a 0.902 save percentage. The Profs averaged 20.5 shots per game and allowed just 5.4 shots to opponents.
In 16 starts, junior goalkeeper Shelby Money (Vineland, NJ) ranks seventh in the nation with a 0.28 goals against average and a 0.889 save percentage.
Scranton (14-3-2) earned an automatic bid to the NCAA Tournament after winning the Landmark Conference Championship, 2-0 over Susquehanna. The Royals have gone 9-1 in their past ten games with seven shutouts and a goal differential of 28-5. This marks the Royals’ second-straight NCAA appearance and 17th in program history.
Scranton is making their sixth NCAA appearance in the past ten seasons. The Royals are led by six double-digit scorers including junior forward Jamie Hreniuk (West Caldwell, N.J. / James Caldwell) with 12 goals, one assist and 25 points.
The Royals average 12.5 shots per game, and they allow 11.6 shots to opponents despite giving up just 13 total goals.
PK HEARTBREAKER: Sixth-seeded Westfield State University men’s soccer team lost a heartbreaker by the slimmest of margins in last weekend’s Massachusetts State Collegiate Athletic Conference championship game, falling to top-seeded Salem State University 3-2 in the penalty kick shootout after the two teams tied 2-2 through regulation time and two overtimes at Alumni Field in Salem, Mass.
Salem State goalkeeper Chris Jimenez made a diving save at the right post on the Owls’ final penalty kick try of the shootout to secure the conference title, and the league’s automatic bid to the NCAA Tournament. – Courtesy of Westfield State University Sports