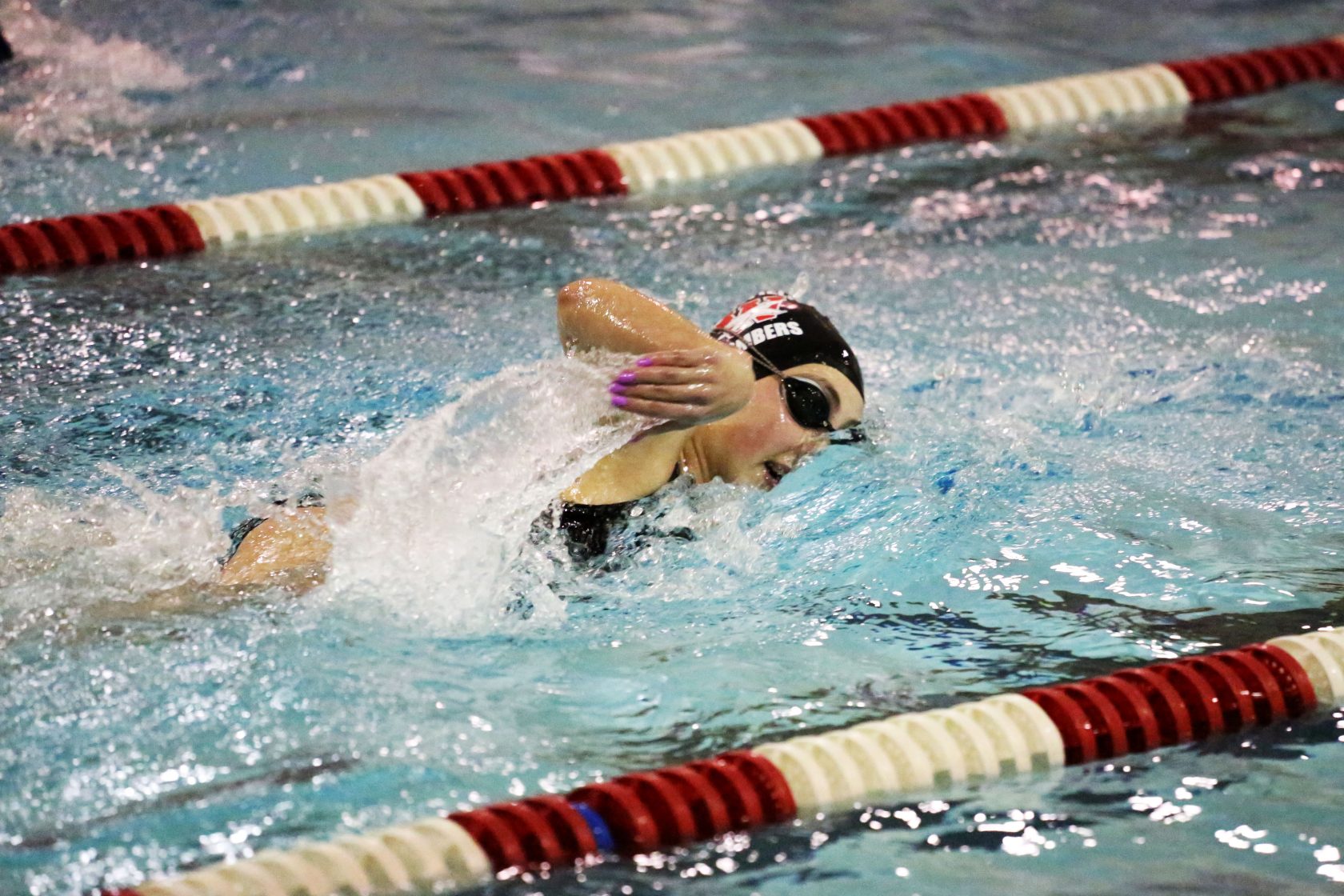 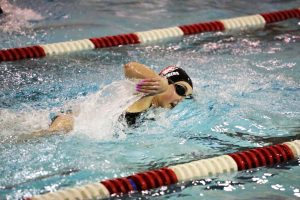 WESTFIELD – For the Westfield High School girls swim team, the end result in Friday’s meet was a loss to Longmeadow, 110-76. The final score though did not reflect the effort as several races were decided by fractions of a second.
“Unfortunately things did not go well for us,” Westfield coach Tom Lewis said of the home loss which came on senior day. “We lost a lot of touch-outs which made the score look a little bit more lopsided than it should have looked.”
Westfield was touched out in several events, including the medley relay (Emilie Pease, Lizzie Fraser, Emily Langlois, Sara Russell), which saw its team post a season best 1:58.96; 200 freestyle (Alexa Richter, 2:05.06); 200 individual medley (Fraser); 50 free (Pease, season best 26.50, had the race won until the very last stroke); and 100 backstroke (Pease, season best/D1 qualifying time of 1:03.58).
Richter (100 free, 57.87) and Fraser (100 breaststroke, 1:13.77) won one event apiece for Westfield, Bombers diver Claudia Tossi was edged out of gold by 9/10ths of a point, and the 200 free relay team (Russell, Fraser, Kathryn O’Connor, Richter) and 400 free relay team (O’Connor, Richter, Emily Langlois, Pease) garnered silver medal finishes with season best times.

BOYS SWIMMING
Longmeadow 113, Westfield 72
Westfield opened the meet with a thrilling finish in the medley relay, winning by touch-out as Tommy Russell, Patrick Lurgio, Jack Beaulieu, and Matt Morash swam a season best 1:44.83.
Russell also won the 50 freestyle (22.13) and broke his own school record in the 100 backstroke with a Western Mass leading and D1 qualifying time of 53.33.
Morash finished first in the 200 individual medley (2:11.45) and 100 freestyle (52.07). Lurgio posted a Western Mass qualifying time in the 100 free (53.69), good for fourth against Longmeadow.
Morash, Cole Viamari, Lurgio, and Russell also posted a season best, second-place finish in the 400 free relay (3:32.90).
Westfield’s Kevin Hayes finished second in diving with a personal best 245.90 points.

SKIING
Down the slopes, up the charts
CHARLEMONT – The Saints are on a roll.
The St. Mary High School boys ski team topped the charts in the division with a strong night over Minnechaug, putting three skiers in the top 15 overall and four in the top ten in the division at Thursday night’s Pioneer Valley Interscholastic Athletic Conference race at Berkshire East. Matthew Masciadrelli continued his streak of Giant Slalom wins though the field was a bit closer this time around. Matt finished with a first place time of 23.04.
“Matt had a great run and attacked the pitch and even with running a little low at the bottom, still kept his skis running clean,” St. Mary coach Andy Lussier said. “He is really dialed in with GS.”
Jack Masciadrelli threw down a great run that put him third overall (23.52) and second in the division. “Jack is hungry for a win,” coach Lussier said, noting that Jack closed the gap only being a half second off of Matt’s time.
Hayden Lussier continued to show his appetite for success, putting another solid run down in 24.86. Collin Freeman’s solid run (26.89) also continued with a finish in the top tier of the overall and the top 10 of the division.
“Collin is ‘Mr. Consistent’ and his consistency is what is allowing us to win as a team,” coach Lussier said. “He is skiing great.”
Westfield’s Jacob Stephens (13th) and Ethan Flaherty (16th) managed to crack the overall top 20 with times of 25.07 and 25.52, respectively.
In the girls’ race, Westfield’s Grace O’Connor finished third overall with a time of 36.78. St. Mary’s Chloe Lussier continued her ascent up the finish order, placing seventh overall (3rd division) in 39.14.
“Chloe has been working hard on slalom and is building confidence,” the Saints coach said of his top female skier. “She has been pretty driven this season.”
St. Mary’s Ally Rougemont also continued her steady season-long climb, drawing praise from her head coach. “You got to love her competitive spirit,” coach Lussier said.
Gateway’s Jessica Garriepy finished ninth overall (40.31), and Gators’ Isabel Beaudry was 15th (44.83).

GIRLS BASKETBALL
Clarke leads Rams to victory
Southwick 42, Easthampton 35
Caroline Clarke led Southwick to victory with 14 points as the Rams received balanced scoring from the rest of the team Friday.
In JV action, Alyssa Citro had five points and Zoey Stevenson made a key lay-up late to propel Southwick past Easthampton, 36-29.