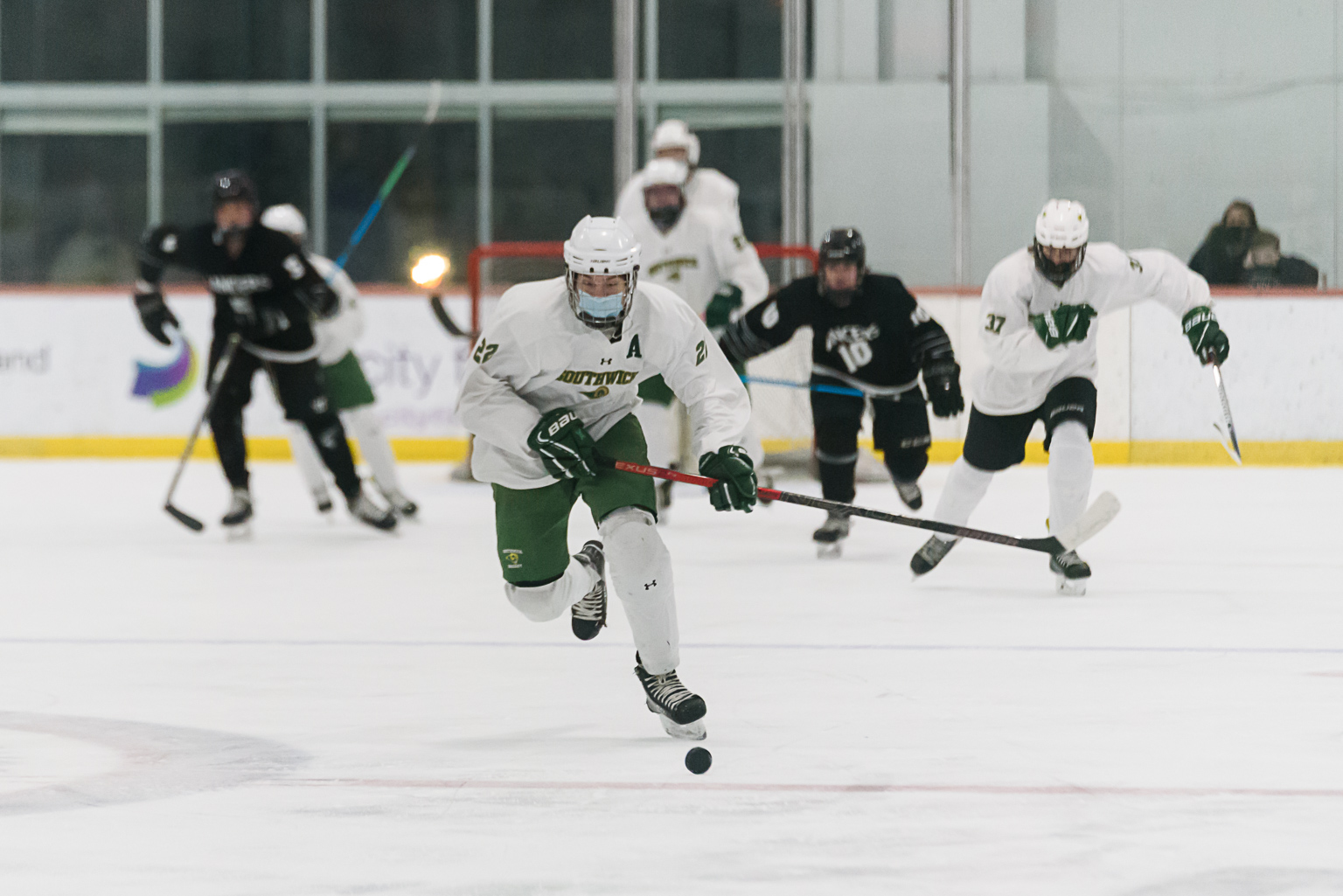 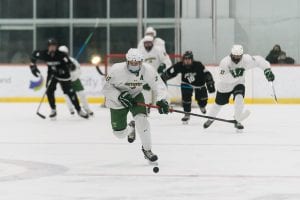 And the chase is on with Southwick’s Aidan Jubb (22) leading the pack during Wednesday night’s boys ice hockey contest against Longmeadow at Amelia Park Arena. (MARC ST.ONGE/THE WESTFIELD NEWS)

SOUTHWICK – For nearly 33 minutes, the Southwick Regional High School boys ice hockey team kept the region’s premiere high school hockey team, the high-powered Longmeadow Lancers, in check Wednesday night at Amelia Park Arena. The Rams awoke a sleeping giant though as the Lancers reeled off four goals over the game’s final 12-plus minutes en route to a 6-1 victory.
Longmeadow’s Luke McHugh recorded a hat trick.
Southwick put forth an impressive showing through two periods. The Rams matched Longmeadow’s effort nearly stride for stride.
It wasn’t until Southwick committed a penalty that Longmeadow finally broke the ice, or rather the goose eggs on the scoreboard. McHugh skated down the right side of the ice, drove deep past the right circle and steered the puck into the net for a power play goal with 4:45 remaining in the first period.
Nineteen seconds later, Southwick was back on its heels (er, skates) when another penalty left them shorthanded again. The Rams killed off the penalty, and then, just before the buzzer ended signaling the end of the quarter, their goalie, Andrew Morris made his 14th save.
Southwick’s Aidan Jubb attempted to net a game-tying goal early in the second period, but Longmeadow goalie Dmitri Beach used to his leg pad to knock away the puck. Jubb also had a chance thwarted early in the first period when he stole the puck near mid-ice, broke away from the pack, and attempted a shot. Beach made a point-blank save.
Longmeadow’s Robert Croteau expanded his team’s lead, scoring on a redirect with 3:41 left in the middle frame. Croteau deflected a slap shot from Adam Low that originated at the Southwick blue line.
Southwick cut its deficit to one again, 2-1, on a goal from Jake Martin with 6.9 ticks remaining in the quarter. Martin stole the puck and slipped a shot past Beach.
Morris’s saves total at the end of two periods stood at 27.
Although Southwick stayed within a hockey stick’s length of a tie, Longmeadow exploded for four goals with scores from McHugh, Cole Guidrey, Richard Joseph, and McHugh again within a six-minute span to pull away.