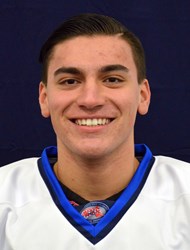 WESTFIELD – The Plymouth State Panthers scored the first three goals of the game Saturday night, cruising to a 5-2 win over the Westfield State men’s hockey team in MASCAC action at Amelia Park Ice Arena.
With the win, Plymouth State improves to 15-3-1, and sits atop the MASCAC standings with a league record of 10-1-1. Westfield State drops to 11-8 on the season, 6-6 in MASCAC play.
Junior forward Michael Economos (Crystal Lake, IL) led the Panthers with two goals, while junior forward Dan Dupell (Collegeville, PA) added a goal and two assists.

Junior defenseman Erik Strom (Gothenburg, Sweden) opened the scoring for Plymouth six minutes into the first period, pouncing on the puck in front of the net after a rebound from a shot by Dupell.
Economos netted his first goal with 1:47 remaining in the first period, scoring on a slap shot as the Panthers skated with a man advantage. Dupell and Zach Fox ((Sandown, NH) were credited with assists on the play.
Junior forward Ryan Callahan put the Panthers ahead 3-0 less than a minute into the second period before the Owls finally answered with a goal of their own.
Westfield freshman forward Aaron Clancy (Quincy, Mass.) put the Owls on the board eight minutes into the second period, cleaning up after a shot by sophomore forward Roman Pfennings (Grefath. Germany) bounced off Plymouth goaltender Gordon Ceasar (Oak Park, Calif.).
Three minutes later, however, Economos scored his second power play goal of the evening to push the Panthers lead to 4-1. Dupell scored Plymouth’s final goal with 16:49 remaining in the third period.
Owls senior forward Dalton Jay (Hamilton, Ont.) scored his league-leading 13th goal of the season late in the third period from just beyond the right faceoff circle to cap the scoring.
Ceasar made 33 saves on the night to earn the win in net for the Panthers. Westfield junior goaltender Jonathan LoParco (Vaughn, Ont.) made 26 saves in the loss.
Westfield State will try to rebound from the loss on Thursday, as they host Salem State at 7:35 p.m. Plymouth State will play host to UMass Dartmouth next Saturday at 6 p.m.