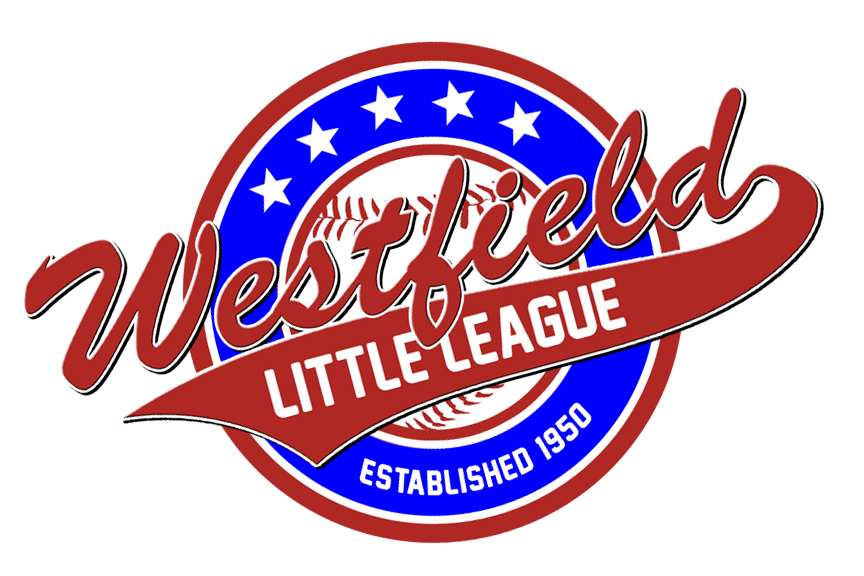 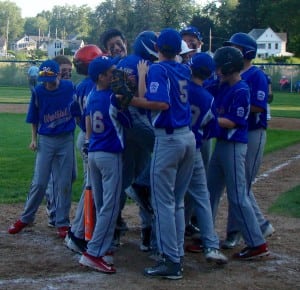 Westfield American’s Jake LaBombard jumps into the arms of teammates, who swarm him at home plate after clubbing a home run in this 2015 Little League tournament game. (THE WESTFIELD NEWS FILE PHOTO)

WESTFIELD – The summer night skies all across the land just got a little bit darker.
After a thorough assessment of the impact the devastating COVID-19 pandemic has had on 6,500 community-based Little League programs in 84 countries and based upon the direction of governmental and public health authorities, and in consultation with medical professionals and its Board of Directors, Little League International announced Thursday its decision to cancel seven World Series tournaments and their respective regional qualifying events.
“This is a heartbreaking decision for everyone at Little League International, but more so for those millions of Little Leaguers who have dreamt of one day playing in one of our seven World Series events,” Little League President and CEO Stephen D. Keener said in a prepared statement.
“After exhausting all possible options, we came to the conclusion that because of the significant public health uncertainty that will still exist several months from now, and with direction from Pennsylvania Governor Tom Wolf and Secretary of Health Dr. Rachel Levine, as well as senior public health officials and government leaders from locations where our other six World Series are held, as well as the their qualifying regional tournaments, it will not be possible to proceed with our tournaments as we’ve hosted them for nearly 75 years.”
The American Legion Baseball Division announced the decision to cancel its World Series and Regional Tournaments last month.
Several factors went into the decision to cancel the Little League World Series and Regional Tournaments, including:
the inability to play qualifying tournaments in many of Little League’s U.S. and International regions, coupled with direction from federal officials regarding the complexity of international travel restrictions and immigration requirements;
an indication from teams from around the globe that they will be unable to participate or travel to these tournaments;
and the testing and mitigation protocols that would need to be in place at these significant public events should an individual participating or attending an event be diagnosed with COVID-19. 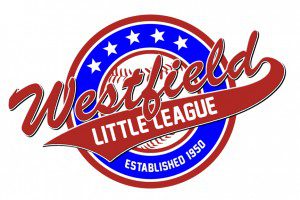 The cancellation includes the 82 regional qualifying tournaments and their respective seven World Series events:
Little League Baseball – South Williamsport, Pa.;
Little League Softball – Greenville, N.C.;
Intermediate (50/70) Baseball – Livermore, Calif.;
Junior League Baseball – Taylor, Mich.;
Junior League Softball – Kirkland, Wash.;
Senior League Baseball – Easley, S.C.;
and Senior League Softball –Sussex County, Del.
As 2021 was originally supposed to be the playing of the 75th Little League Baseball World Series, that celebration will now take place in 2022. More information about World Series locations and future dates can be found at LittleLeague.org.
As a result of this decision, the 2020 MLB Little League Classic presented by GEICO, originally scheduled for August 23 between the Boston Red Sox and Baltimore Orioles, has also been canceled. Major League Baseball and the Major League Baseball Players Association have already committed to returning to Williamsport for the 2021 MLB Little League Classic next August.
“Delivering this news comes with a very heavy heart. We have never had to cancel our World Series tournaments, but, right now, as our world comes together, we must do everything we can to help stem the spread of this deadly virus,” said Hugh E. Tanner, Little League International Board of Directors Chairman. “While we take this pause from the World Series and Regional Tournaments this summer, we are committed to working with our volunteers and staff to continue to provide an unparalleled youth sports experience to all children and be back stronger than ever in 2021.”
To assist the local Little League programs as they continue to assess their local operations, Little League International will be crediting all chartered programs with the affiliation fees paid for their chartered teams in 2020, which totals approximately $1.2 million in support to local leagues. These funds will be credited through Little League’s Data Center and be available for local leagues to use on current balances, future affiliation and insurance fees, tournament enrollment, and other Little League-related expenses.
As each state and community will have different guidance for resuming organized youth sports, Little League International strongly encourages volunteers to confirm with their local and state health officials that it is safe to do so before resuming Little League activity after May 11.
“It’s disappointing,” Westfield Little League Baseball and Softball President Scott LaBombard said, regarding the league’s decision to cancel the Little League World Series and Regionals, “especially for the kids who are in their last year in Little League.”
Although LaBombard expressed his disappointment over the recent news, he said he fully supports the league deciding to err on the side of caution.
That being said though, LaBombard is still optimistic that Westfield Little League will return in some way, shape or form this year.
“We still fully intend to give these kids something,” LaBombard said, “whether that’s an abbreviated season in the spring or in the summer on an extended fall season.”
LaBombard said the three keys to beginning a Little League season will likely hinge on schools fully reopening this fall, city parks reopening to the public for gatherings, and positive recommendations from the local Health Department.
According to Little League headquarters, playing opportunities could include not only regular season activities, but opportunities for local district, and, perhaps, state all-star tournament play to provide players, especially those moving up to a new age division in 2021, a tournament experience, if possible and safe.
Little League International and Regional staff will continue to be a resource for District and league volunteers, and are encouraged to contact [email protected] for additional support. For more information about Little League’s recommendations surrounding the Coronavirus (COVID-19), frequently asked questions, season resumption guidelines, and more, visit LittleLeague.org/Coronavirus. – Information from Little League International was used in this article