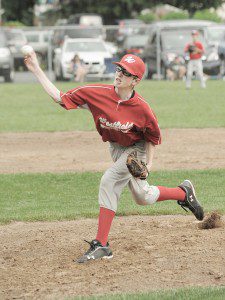 WESTFIELD – Westfield was determined to win a matchup between a pair of Little League Baseball All-Star teams, and there was a 100 percent certainty – barring a rainout – that the Whip City would come out a winner.
Ethan Flaherty pitched 5 1-3 innings of four-hit ball to help lead the Westfield North 11-12-Year-Old All-Stars past Westfield South 4-1 in a District II tournament opener Thursday night at Cross Street Field.
Flaherty struck out four batters and allowed one (unearned) run.
“I was pumped because this is All-Stars – not the regular season – and this is a big rivalry,” said Flaherty, who relied heavily on his fastball and occasional knuckler to keep the South off-balance.
“It was a great effort by their starting pitcher,” Westfield South manager Mike Raposo said. “He totally shut us down.”
Colin Scanlon managed the only run-scoring hit for the South, belting an RBI triple to the left-center field fence in the bottom of the third that tied the game at 1-all. Westfield North broke a scoreless tie in the top half of the inning, knocking in Ryan Moorhouse on a Flaherty RBI double. Moorhouse reached on a fielder’s choice, following Kevin Paluck’s one-out single.
Westfield North scored the go-ahead run in the fourth when Jack Lamirande singled, advanced to second on a passed ball, and eventually came around to score on an infield error.
In the fifth, the North tacked on a pair of insurance runs. Moorhouse doubled for the second time in the game, advanced to third on a wild pitch, and scored on a fielder’s choice. Walter Figeroa (2-for-3) hit a two-out double for a 4-1 lead.
Matt Bernanchez also singled with a runner on for North in the sixth, signaling the South’s call to the bullpen. David Tirrell walked the first batter he faced, but got out of a bases-loaded jam by retiring the North’s Nos. 2-3-4 batters, two by way of the strikeout.
North reliever, Paluck got out of a bases-loaded jam in the bottom half of the final inning with a strikeout and groundout to earn the save and end the game.
“It was a great game,” Westfield North manager Bill Lamirande said. “These were possibly the two best teams in the whole tournament right here. It came down to the wire, and clutch hitting.”
The South’s Tanner Koziol went 2-for-3, and David Roundy had a hit.
“I thought our pitching was pretty solid too,” Raposo said. “We just need to work on hitting, and bounce back.”
South starter Colin Scanlon scattered seven hits through 4 2-3 innings and allowed three runs, one of which was unearned. Tony Torres allowed just one hit in one-third of an inning of relief.