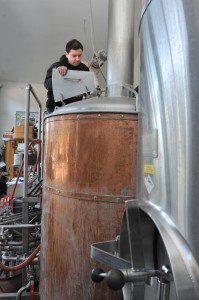 Chris DeGasero, a brewer at the Cambridge House Brew Pub, examines a new batch of pumpkin ale in one of the large kettles used for brewing. (Photo by chief photographer Frederick Gore)

With Halloween arriving next week and Thanksgiving just around the corner, The Cambridge House in Granby, Conn. is offering some autumnal brews to tempt the palette.
Using pumpkins grown at Coward Farms in Southwick, Head Brewer Chris DeGasero has created fresh pumpkin ale.
The ale is ready this week after two weeks of fermenting. DeGasero used 200 pounds of the local vegetable to make eight barrels – roughly 250 gallons – of the beer.
“Our kitchen staff quartered the pumpkins and roasted them and we added it right into the brew kettles,” said DeGasero. “It extracts the sugars and because the yeast eats up the sugars, it has a higher alcohol content.”
DeGasero said he added “a dash” of pumpkin spice to the mix and the result is a light pumpkin flavored brew, not too spicy and not sweet.
The Cambridge House owner Scott Riley said using fresh, local pumpkins makes the beer taste better and helps support local business.
“When you take something that’s fresh and roast it you get a better flavor,” said Riley. “We use fresh ingredients here and it makes a difference.”
The Cambridge House also uses locally grown food whenever possible, including produce, milk and cheese.
Right now, DeGasero is offering a Lazy Bee Honey Tripel beer made with local honey.
“Our customers enjoy the local products,” he said.
In addition to pumpkin ale, The Cambridge House is offering an autumnal menu that will include, among other things, pumpkin fries and pumpkin bites.
DeGasero said eight barrels of beer may only last a month.
“It will probably be around through Thanksgiving, but you never know,” he said. “The Octoberfest we made sold out in two weeks.”
DeGasero said he does not like to brew larger quantities because he wants The Cambridge House beer to be as fresh as possible.
“Fresh tastes better,” he said.
DeGasero is a New York native who moved to the area last year and has been with The Cambridge House since last spring.