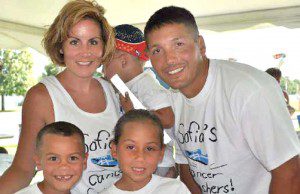 Sofia Blanchette, then 10, the inspiration for Sofia’s Cancer Crushers, poses with her parents, Jenn and Michael Blanchette of Agawam, and her brothers Benjamin, then 6, and Brady (in arms) then 3, at the start of the 2011 Mass Dash 200 mile relay race to benefit the Jimmy Fund. (Photo courtesy massdashrealy.org)

WESTFIELD – Sofia’s Cancer Crushers may not have crushed cancer – yet– but they have crushed the competition when it comes to raising money for the Jimmy Fund
The Crushers are a team of runners who will compete in the 2013 Mass Dash, a 200 mile non-stop relay race across Massachusetts on Saturday and Sunday.
The team is named after 10-year-old Sofia Blanchette who was diagnosed with cancer 4 years ago.
After her 2009 diagnosis at the Dana Farber Cancer Institute, the beneficiary of the Jimmy Fund, her cancer has been in remission.
Her parents, Michael and Jenn Blanchette of Agawam, have participated in the Mass Dash for 4 years with a team they recruited.
Although there were some changes in the roster after the first year, charter member and avid local runner Michael McCabe said that the team lineup has remained “pretty stable” since then and includes runners Brian Sutton, Manny Sardinha, Bob Bacon, Aaron Kane, Brian Berkel, John Bosse, Jeff Cahill, Jim Cook and Jason Maloney, as well as the Blanchettes and himself.
Although the team may not have won the race, yet, they have won the informal competition to raise funds for the charity each of those years.
This year the team has gathered donations of $27,577, at last report. The second place team, The Crew from Woo, has pledged $7,786.
McCabe said “We hope to reach 30 (thousand dollars)” before the start of the race Saturday and pointed out that “one hundred percent of the proceeds go directly to cancer research” as there are no overhead costs for the institute.
“This entire race is completely funded by the racers themselves” he said.
With little competition in the fundraising arena from the other teams, some of the Crushers have resorted to competing with each other and Bacon and McCabe in particular have been engaged in a friendly contest for bragging rights.
McCabe said that Bacon has a considerable lead with $7,500 in contributions compared to his $6,500 but points out that there are still three days to contribute and donations to his tally can be made at http://www.active.com/donate/massdash2013/MMcCabe31.
The race begins after sunrise on Saturday at the foot of Mount Greylock in the northwest corner of the Commonwealth, in Adams, and teams of as many as twelve runners will run a 200 mile relay race with 36 legs to take them to the finish line on Carson Beach on Dorchester Bay in Boston.
Sofia’s Cancer Crushers will have two vans, driven by Tom Fitzgerald, Paul DiPietro and Cherie Sutton, that will pace the active runner and drop off the next participant to take the baton at each turnover point.
McCabe said that the length of the relay race’s legs is somewhat variable but each runner will race an average of 17 miles in three legs.
McCabe said that the team’s best finish time was 29 hours and 51 minutes for a ninth place finish in 2011.
“This year we’d like to see 28 hours, he said.