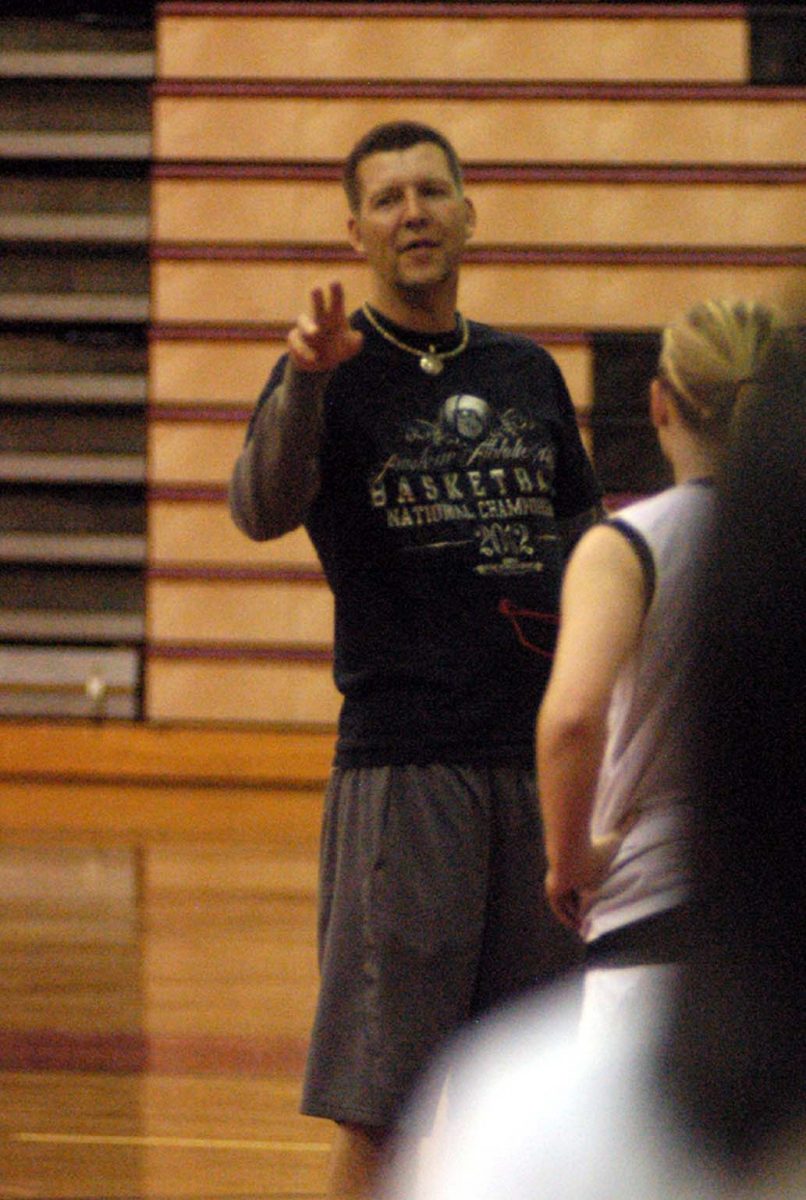 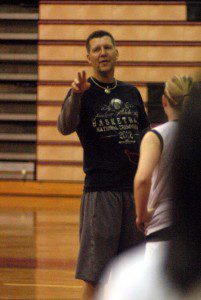 WESTFIELD – Over the course of the last decade, Westfield High girls’ basketball has featured a bunch of really talented multi-sport athletes, with the “other” sport being their more dominant teams, resulting in offensive and defensive woes on the court.
That is all about to change.
Hadley resident Ralph Loos has taken over as the head coach of a struggling program at Westfield High, determined to change the attitude and atmosphere.
“If we don’t make the tournament, I’ll be bitterly disappointed,” said Loos, who was hired two weeks ago. “I know that sounds a little crazy.”
There is nothing loony about Loos’s success. 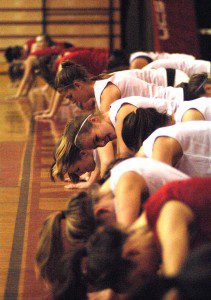 The Bombers prepare for Friday night’s season opener at Northampton with push-ups during a grueling practice session. (Photo by Chris Putz)

As the coach of Frontier Regional, Loos inherited a 1-19 team and in four years put together a 59-21 record. In the offseason, he coaches the Mass Frenzy AAU basketball team, based out of Northampton.
“I am changing everything (here) obviously,” Loos said.
First off, Loos has canned the “zone” defense.
“There will be no ‘zone’,” he said. “It breeds passivity and laziness. We may play an aggressive zone occasionally but it is impossible to be good at zone if your team is not a great man-to-man team. The other way, you’re playing not to lose.”
Loos has also stripped the “varsity” and “junior varsity” squad tags from those two teams, noting that eight or nine players will remain on “varsity” based on their performance on the court, while he will shuttle the others back and forth between those units throughout the season.
The first test for Westfield and its new head coach will be the Blue Devils. The Bombers tip off their season at Northampton on Friday, against arguably one of the top three teams in Division I. The game is at 7 p.m.
“If we play good defense, we can beat anybody,” coach Loos explained. “I hope people get back to supporting this program. It’s going to be different than in the past. It’s a good challenge, but we’ve got a great group of kids.”
Notes: Loos coached four of Westfield High’s current girls’ basketball players at the AAU level.