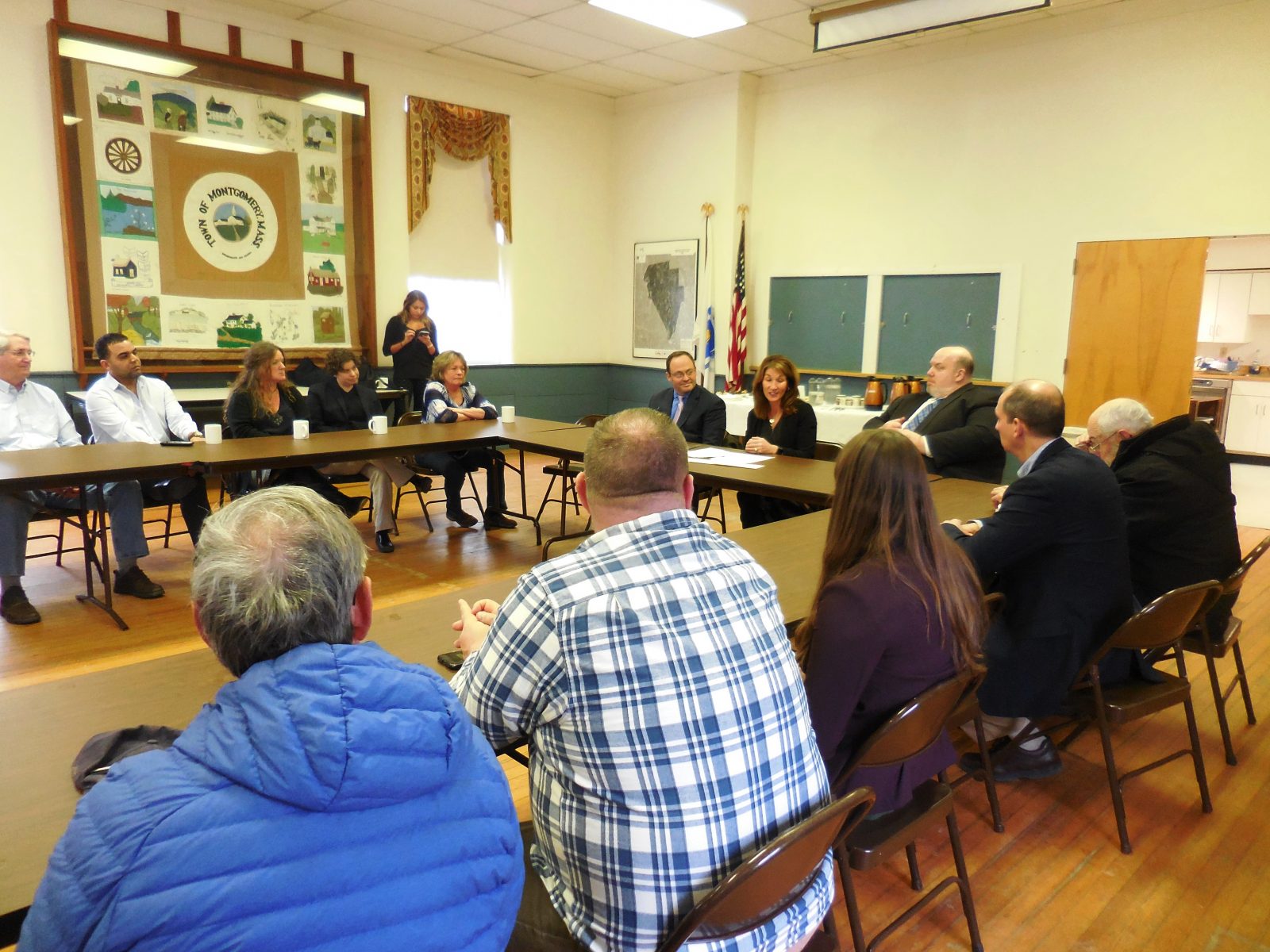 MONTGOMERY – On Tuesday, Lt. Governor Karyn Polito came to Montgomery Town Hall to meet with Hilltown officials and present two grants – one for $42,000 to the Hilltown Collaborative for marketing and promotion of the region, and one for $150,000 to the Pioneer Valley Planning Commission (PVPC) to help the towns with Internet Technology upgrades and management. 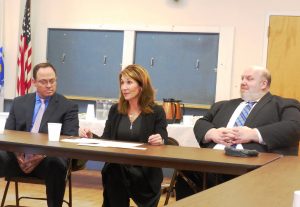 Sean Cronin of the Division of Local Services and Senator Donald F. Humason joined Polito on the visit. Polito said she and Humason used to sit next to each other while serving in the House of Representatives. “It’s good to have the Lt. Governor come out to Western Mass. once again,” Humason said.
Also present were Joshua Garcia, Patrick Beaudry and Molly Goren-Watts of PVPC, who have been working with the towns since they signed Community Compacts with the Baker-Polito administration in May 2016, pledging to collaborate on regional issues. These are the fourth and fifth grants that the towns have received since first signing.
Polito, who has made frequent visits to Western Massachusetts, started the meeting by asking everyone gathered to introduce themselves and what they do in their respective towns. All of the representatives expressed their gratitude for the support of the state. Polito gave a lot of the credit to Cronin, who has also worked closely with PVPC and the Hilltown Collaborative.
“Sean comes with a lot of experience in municipal government in Brookline. The governor and I and our team are so grateful to have Sean’s leadership in the DLS. His expertise is so important. We wouldn’t be so far along without his engagement. We’re getting a lot of work done, and a lot of that goes right back to Sean,” Polito said. 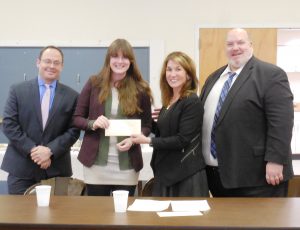 Polito presented the check for $42,000 to Hilltown Regional Economic Director Jeanne LeClair on behalf of the Hilltown Collaborative, and asked LeClair to talk about the work she’s been doing since taking on her role in June.
“As the product of a very small town, I feel proud and lucky to work in a program that’s so well structured. The Gateway Hilltowns support each other, and pride themselves on their history,” LeClair said. She pointed to the Village Enterprise Center which opened in Chester last week, and will serve as a computer center, classroom space, drop in and visitor’s center in what she called “a spirit of collaboration” with several Hilltown groups, including the Southern Hilltown Adult Education Center and The Historic Route 20 Association.
LeClair said she’s been working with small businesses on business plans, marketing and websites, and will be holding a “Biztro” drop-in for businesses at the Village Enterprise Center on Monday nights. She has also started the Gateway Enterprise Club, a small business hub for students at Gateway High School.
LeClair said the grant will be used for marketing and promotions of the Hilltowns. Through a Request for Proposal, the Collaborative has teamed up with TSM Design in Springfield for branding and marketing. She said the emphasis will be on the Hilltowns being a great place to live, raise a family, and start a business; and on the great natural resources of the area.
Hilltown Collaborative Chair Andy Myers of Chester said that LeClair’s position as regional economic development director is itself a great example of towns working together. “We got our first year funding from the Community Compact for Jeanne’s position. Now the towns are putting her salary in as a line item,” Myers said.
Polito said it is a great success story. She also said she knows that broadband access has been an issue in the small towns in Western Mass, and the administration, along with their “legislative friends” have made a commitment to getting the communities online. She said when she started, there were 53 communities still on dial-up, and now they are down to eight, with the others on their way. “We will work very closely with the remaining communities on a pathway forward. We know it’s an economic issue, a safety issue, a health issue,” Polito said.
“We recognize the need for more IT regionalization and efficiency,” Polito also said in presenting the Regional IT grant to PVPC for $150,000. 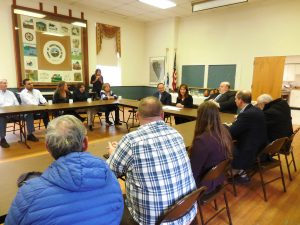 Hilltown officials gather at Montgomery Town Hall on Tuesday to meet with the Lt Governor. (Photo by Amy Porter)

“We are really excited about this project. This is a great example of a lot of different programs coming from the state and working with PVPC,” said Goren-Watts, who will be the lead on the program. Through an earlier grant opportunity, she was able to do an IT assessment in each of the towns, looking for the potential for a shared IT director. Instead, they realized that having PVPC offer IT management services and help with procurement and hiring of third party vendors would be more stable for the towns than an individual hire, and also provide economies of scale.
With the grant, PVPC will start a pilot program, working with the Hilltown Collaborative and the Gateway Hilltowns to offer the service. They then hope to expand the program and offer it to all of their 43 member communities.
“That’s very innovative, and the economies of scale should improve the quality of service. I think PVPC is one of the only planning organizations doing this, pioneering this initiative,” Polito said. She also said the state has just opened up a new round of capital funds for IT projects that will be closing on Feb. 15.
Some of the grant funds will also be used to provide hardware, software, and rewiring that were identified as needs in the towns, along with some supplementing of initial service contracts, Goren-Watts said.
“We’re very appreciative of everything you have been doing for us, and the resources you’ve made available to us so that we can pursue these programs,” said Derrick Mason of Russell. “Your economic support has helped to fund critical parts and we need your continued financial support. Our small towns are desperate,” he added.
“We recognize these are projects that you couldn’t do without money from the state. In the governor’s budget is continued funding for Community Compact and regional programs,” Polito said.
“I wish we could do this in all the towns,” added Humason. He said regional schools, infrastructure, and economic development are all areas for collaboration, whenever possible.
“As Governor Baker says, when you find something that’s working, keep doing it,” Polito said.