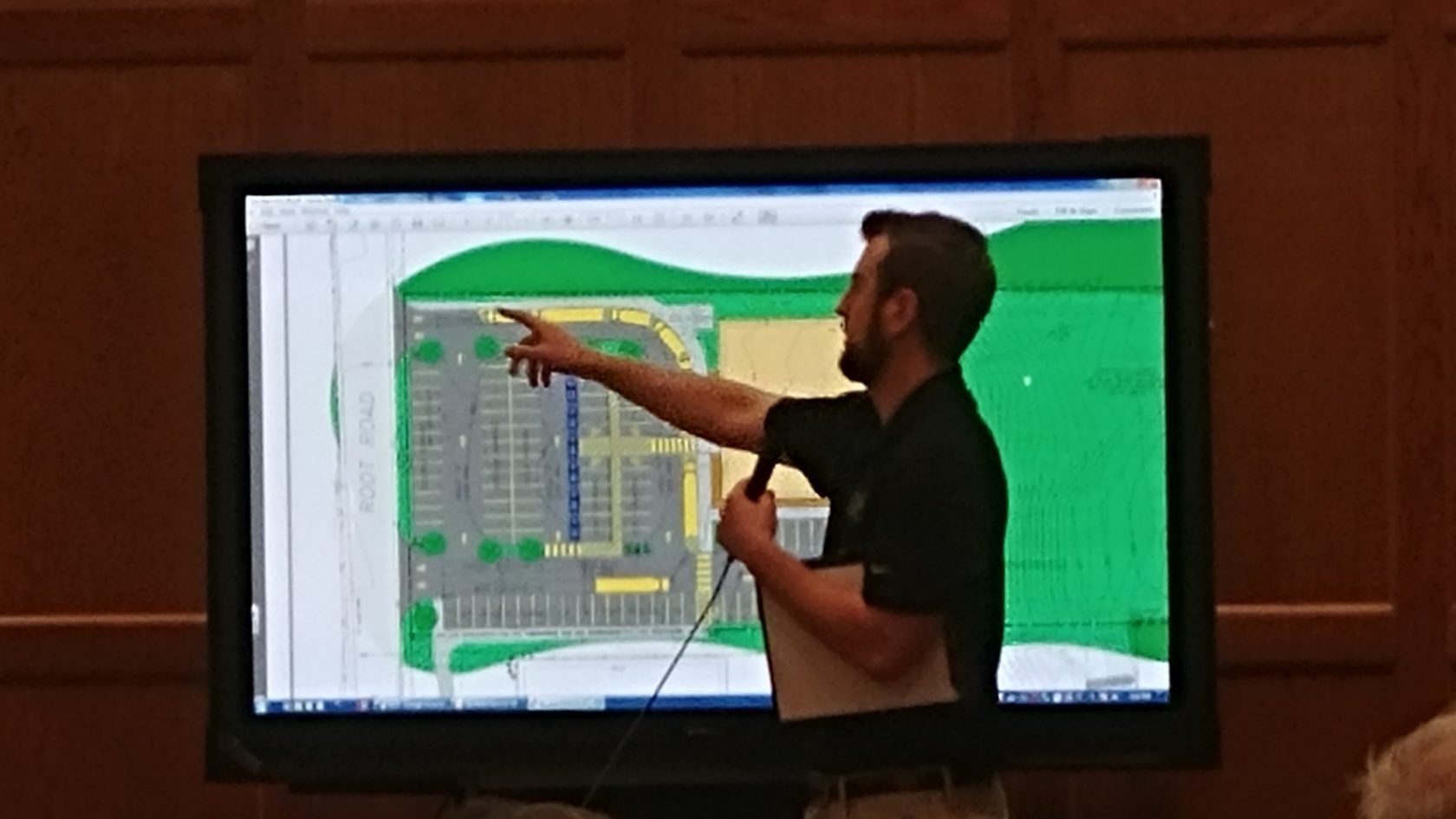 WESTFIELD – The Planning Board continued a public hearing for the Root Road school proposal on Tuesday, resulting in many more questions for the principles to answer before any decision on a site plan is made, despite City Planner Jay Vinskey’s reminders that religious and educational institutions are a by right use according to Mass General Law. 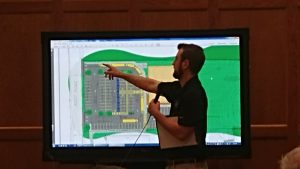 Luke Showalter discusses the plans for a school on Root Road at Dec. 19 Planning Board meeting.

At the last public hearing on Dec. 19, the board had asked for an opinion from the Traffic Commission on the parking, drop-off and pick-up plan for the proposed school. Planning Board Chair Philip McEwan said that according to City Attorney Meghan Bristol, the Traffic Commission had no authority to make recommendations to the Planning Board.
Planning Board member Jane Magarian requested they be given a transcript from the Traffic Commission anyway for the information. She also said that City Engineer Mark Cressotti reviewed the plans, and suggested an independent review of traffic. Vinskey was asked by a majority of the members to get an independent review of the traffic flow.
Luke Showalter and Brian Bailicki of Sage Engineering came prepared to answer questions, but had not added to or changed their plans from the last hearing. The applicant, Roots owner Frank DiMarinis was unable to attend Tuesday’s meeting.
McEwan asked if the septic system for the project was fully designed and approved. Showalter said the perc season would begin in a couple of weeks, and the testing hadn’t been done. He said in the past, they have submitted the results to the Health Department.
“This board is not a clearing house for all approvals. Our focus is the zoning ordinance,” Vinskey said.
“Any special consideration that we should give because it’s over the aquifer?” Magarian asked.
“Nothing specific, no requirement in the ordinance,” Vinskey said. “Keep in mind there’s a bigger state law that says you can put a school anywhere.”
Another question asked of Vinskey was whether the driveways around the school were sufficient for fire department access. Vinskey said he had asked for comments, but did not receive any from the Fire Department. Four of the Planning Board members requested that he ask again and get a definitive answer regarding a fire lane.
Magarian also asked Showalter in the case of a fire, where resulting would water drain into. He said he would find out for the next meeting.
Members of the public were then invited to ask questions of fact. Abutter Vin Rosella asked several questions about fire department access, dumpsters, hazardous waste and capacity to handle a spill, prompting McEwan to ask future speakers to limit themselves to one question.
Showalter said dumpsters were located on the north side, and hazardous waste would be handled by outside contractors, and there is no specific location for onsite storage as yet. He also said there is adequate water pressure in the building.
Magarian also asked about waste from science labs that would need to go to a hazardous waste container, and how big that would be. Several of the questions that were being asked had been emailed to Planning Board members in a memo from Kristen Mello of WRAFT (Westfield Residents Advocating for Themselves).
Mello came forward and said given the plan for the school is for a potential of 584 students in grades 6-12, she asked how many teachers, custodial staff, etc. there would be. A Westfield Education Association member estimated that number to be 100. Mello said that brings the number of occupants to 650 to 700. Mello said there is a limitation in nitrogen sensitive areas to 440 gallons per day of waste water, when more would be needed for the number of occupants in the building.
Another question raised was whether the drop-off queue blocked the handicapped spaces in the parking lot.
Planning Board member William Varellas also questioned the local ordinance (Section 4-140) as compared to Mass General Law, and suggested that the local ordinance was broader, allowing for private service corporations, while the state lists public service.
Vinskey said the intent in how the local ordinance was drafted was to mimic Mass Law, but he said it is true that it doesn’t require it be public, so it is a little less restrictive.
Varellas said if a private school comes in, struggles and fails, could they turn around and sell the building. Vinskey said in order to change the use; they would have to come before the Planning Board for a special permit.
Ward 1 City Councilor Mary Ann Babinski said that based on the missing information, she hoped that the Planning Board would look for a continuance. “Lots of questions,” Babinski said. ”This is over our aquifer, the recharge area for the Town of Southampton. It’s good information to follow up on,” she added. The hearing was then continued to February 6.