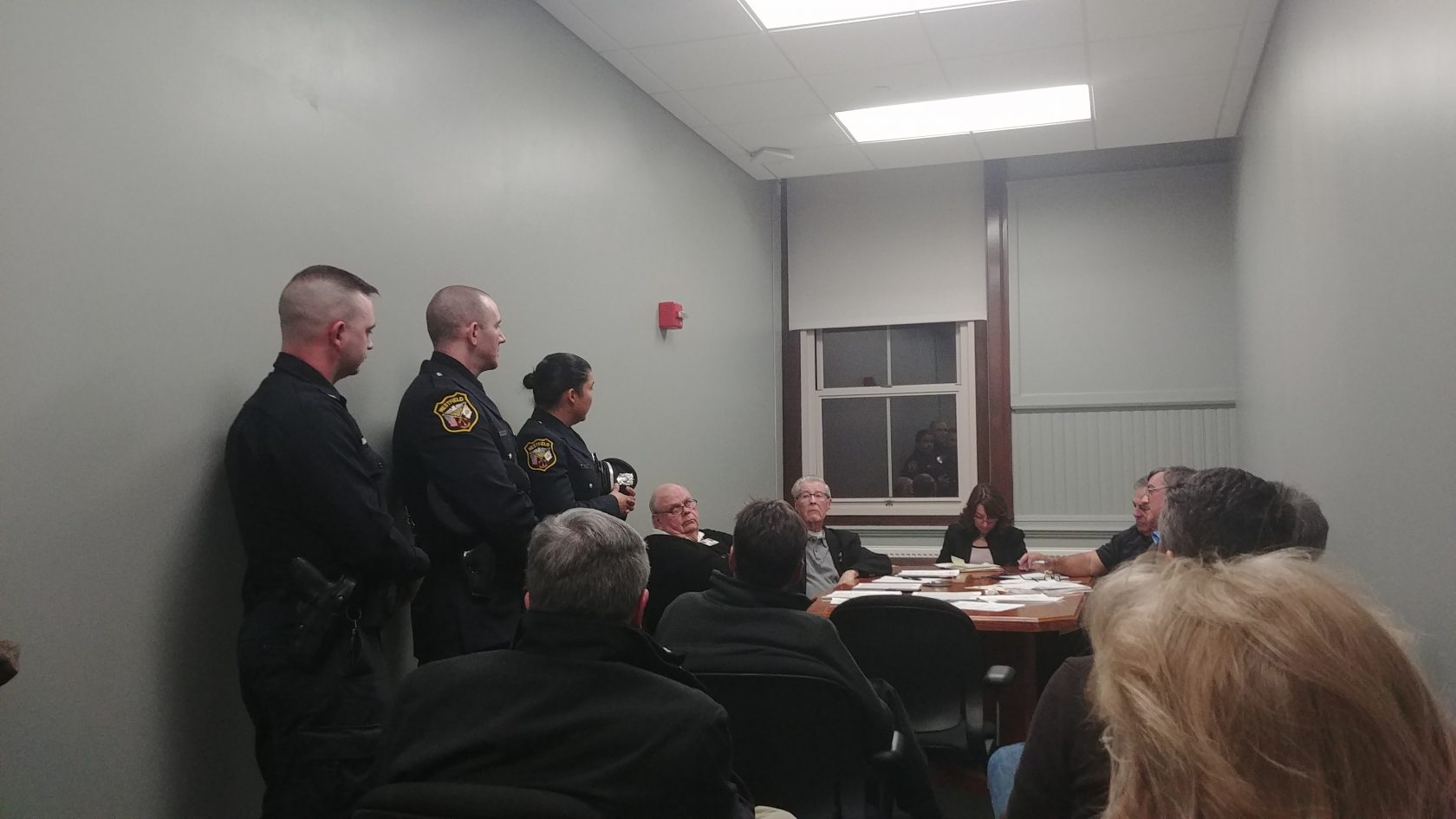 WESTFIELD—The city’s Police Commission appointed one officer to the position of sergeant yesterday, following a special meeting at City Hall.

“There’s no reason to bypass anybody, all three are very strong,” Westfield Police Chief and Commission member John Camerota said. 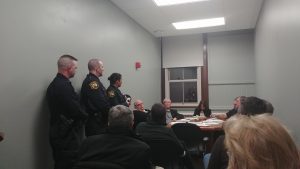 Westfield Officers stand at attention to the left as the Commission makes a decision for the next sergeant for the Westfield Police. From left to right: William Cavanaugh, Michael Gibbons, Juanita Mejias.

“We could take any one of you for sergeant and be very happy,” Commission Chairperson Karl H. Hupfer said.

Gibbons was chosen to replace the soon-to-be retired Sgt. Alex Baginski. According to the Commission, Gibbons would start serving as sergeant on Feb. 4.

The three candidates were previously interviewed for the sergeant position during May last year, as part of a shake-up of the ranks following the retirement of then-Capt. Hipolito “Paul” Nunez in Jan. 2017, as well as the subsequent promotions thereafter.

This time, the candidates were once again interviewed in the public meeting, with their order being determined by their placement on testing for the position. Interview order was Gibbons, Mejias and Cavanaugh.

Gibbons, who noted that he has been a full-time officer on the patrol division for most of his career, remarked on his performance over the past four years. He said that over that timeframe he has conducted over 1,700 traffic stops, made 80 arrests and assisted in an additional 90.

During that time, he said, he received no citizen complaints, and was also nominated for a police commendation shield in 2013.

Gibbons added that he has a Bachelors in Criminal Justice from Westfield State University.

He also mentioned his attendance record, which he said has had 10 sick days in four years.

When asked what area of law enforcement he prefers, Gibbons said patrol.

“I like patrol, chose to stay in patrol,” Gibbons said.

Camerota noted during the interview that Gibbons also previously served with the Westfield Detective Bureau, but after that short stint wanted to get back in patrol.

Mejias, the next officer to be interviewed by the Commission, said that she has been with the department since 2001, and the majority of that time, roughly 11 years, has been spent on patrol.

She is also currently assigned to the Detective Bureau, where she has been for about four months. There the majority of her work is related to sexual assaults, she said.

In addition to this, Mejias noted that she had previously spent over three years in the community policing portion of the department.

Mejias said that her time there helped her learn about what it is to be an officer.

“I value the time I had in community policing, definitely think I learned a lot,” she said, adding that it was more than just responding to calls.

She learned about the community and the people in it, as well as paid attention to the neighborhoods and learning what was needed, she said.

Mejias added that while she does not use it as a crutch, “being female on the department is a huge plus.” She noted that sometimes there are incidents where a gentler hand may be needed, and she can provide that.

In addition, she said that she is bilingual, speaking English and Spanish, which also helps her on the job.

Regarding education, Mejias said that she had received a Masters degree, though the school was not accredited in Massachusetts.

Regarding her favorite aspect of the job, Mejias remarked on the community service aspect of it.

The final candidate interviewed was Cavanaugh, who in May 2017 during the previous interview, was said to have had five years experience on the department and thus had the least amount of the candidates.

However, Cavanaugh’s experience includes him receiving his juris doctorate from Westfield State University.

Cavanaugh also noted that he has recently become a field training officer, a position that trains incoming officers for the job, and it’s “not something I take lightly.”

Cavanaugh said that he aims to be a team player, one “that anybody would want to work with or work for,” and this includes picking up two-and-a-half shifts on Christmas.

When asked about the area of policing he prefers, Cavanaugh noted patrol work, in part due to the variety of instances that the department will deal with.

When asked about the negatives of being an officer, Cavanaugh noted the political climate that the country is in, which can make it difficult in “maintaining trust” with the community.

However, he added that he believes that the Westfield community does have trust in the city’s police force.

When asked about future aspirations, especially regarding his degree in law, Cavanaugh said that he would like to work up through the ranks at the department.

“I would like to advance in this department,” he said. “I don’t want to put a cap on myself for my individual goals.”

“This is where I want to be, Westfield Police,” he added.