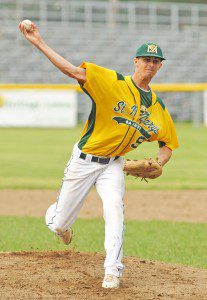 St. Mary’s Joe Lubanski delivers to a Voc-Tech batter during Wednesday’s game at Bullens Field. The Saints went on to win 15-0 in mercy rule. (Photo by Frederick Gore)

WESTFIELD – Players for the Westfield Voc-Tech High School baseball team may be thankful that it will never have to face St. Mary senior pitcher Joe Lubanski ever again.
Lubanski tossed a 3-hitterand recorded five strikeouts on the mound, and went 2-for-3 at the plate with a double, 4 RBIs, 3 stolen bases, and 2 runs scored in St. Mary’s 15-0 mercy-shortened win over Westfield Voc-Tech Wednesday at Bullens Field.
The loss eliminated the Tigers (7-10) from Division III tournament contention.
“I just felt good,” said Lubanski. “I got a good night’s sleep.”
The game had originally been scheduled for Tuesday night, but a rainout forced the game to be postponed a day.
Voc-Tech managed to get its lead-off batter on in each of the first two innings – Conner Hebda singled in the first and Chris Oberther walked in the second – but Lubanski quickly erased those threats.
The Tigers managed just two more base runners with a Hebda single (he stole second) in the third and Oberther’s fourth-inning single. Those runners were left stranded.
While Lubanski silenced Voc-Tech’s batters (retiring the final five), he made noise at the plate early.
Lubanski smacked a two-run base hit to right-center field with one out in the bottom of the first inning, driving in Brandon Geiger and Matt Plasse who drew walks off Voc-Tech sophomore phenom Jake Parsons to begin the game.
In the third, Plasse hit a sac-fly to give St. Mary’s a 3-0 lead. The Saints broke open the game in the fifth.
Plasse reached on an error to lead off the fifth inning, and Noah Parker made it to first on an infield single. Then, up stepped Lubanski, who blasted a two-run double down the left field line for a 5-0 lead. He stole third base and scored on Brandon Gawron’s infield single.
The floodgates opened.
St. Mary’s collected pinch-hit RBI singles from Matt Hannoush and Colin Blake with a pair of passed ball runs, all with no outs. Voc-Tech turned to its reliever but the red-hot Saints continued to set fire to the base paths.
With one out, Plasse hit a 2-run single. Tyler Sutton knocked in a run with two outs. Then, a string of defensive miscues resulted in a 15-run lead, ending the contest.
“We’re heading in the right direction,” St. Mary coach Troy Collins said. “Everybody’s healthy. Everybody’s feeling good about themselves. Now we’ll see what happens.”
St. Mary (17-1) will continue to build its case for the tournament’s top seed. The Saints next play the Gateway Gators (10-9) Thursday at Westfield State University at 4:30 p.m., and finish the regular season at Smith Academy Friday at 4 p.m.
Notes: Lubanski improved his pitching record to 6-0. He has a spectacular 0.00 ERA, and a save.