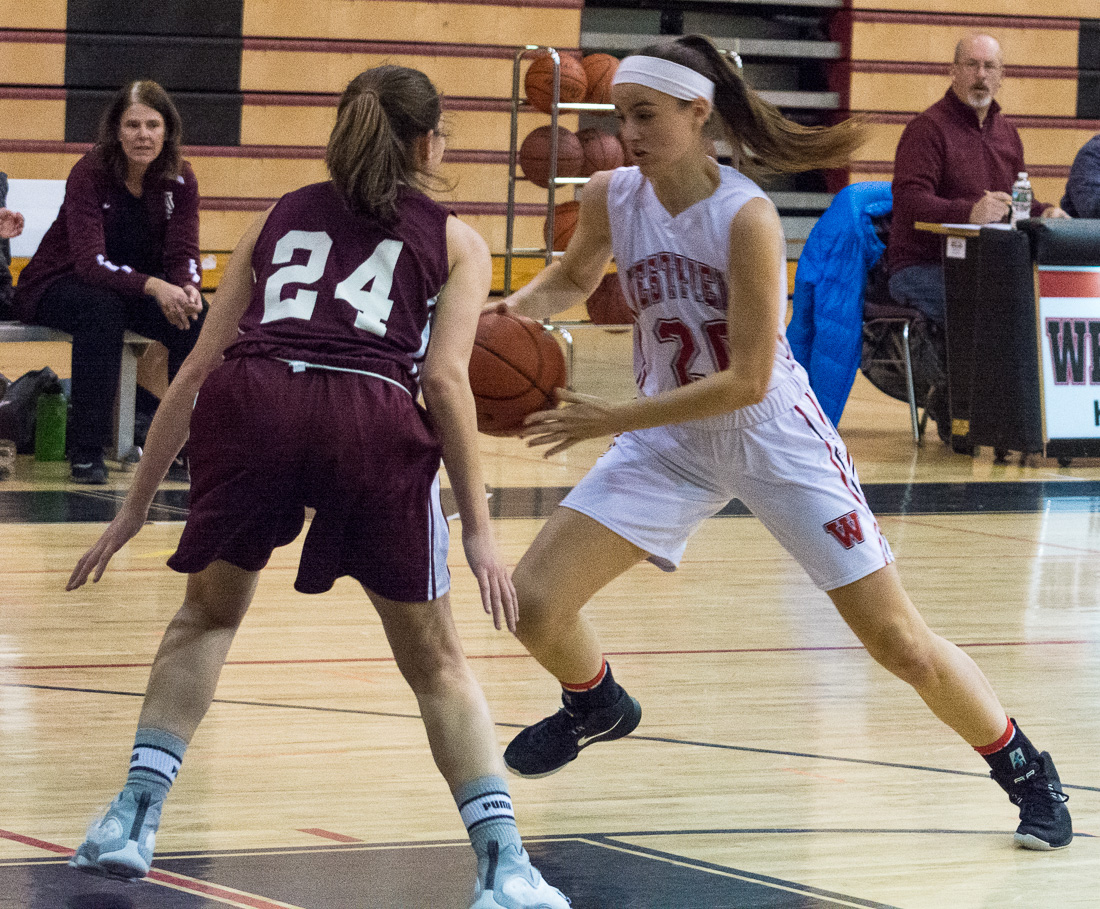 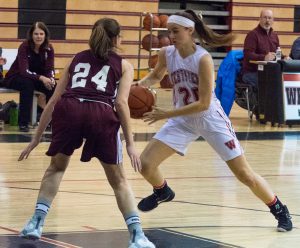 WESTFIELD – Olivia Hadla knocked down four 3-pointers and finished with a game-high 28 points as the Westfield High School girls basketball team bounced back from a brief skid by defending their home court Wednesday night. The Bombers broke though against the Amherst Hurricanes 64-50.
Kaela Mochak chipped in 10 points.
Westfield, which opened the season 2-1, had lost three straight, including a 54-45 loss to Longmeadow Monday night at home.

BOYS BASKETBALL
Tigers trump Gators
Westfield Technical Academy 74, Gateway 27
Westfield Tech jumped out to a 29-3 … and the rest was history.
Mark Klyuchits (14 points), Cody Garwacki (13), Josh Bush (12), Kevin Flores (12), Andrew Czeremcha (9), and Dave Tikhonchuk (7) led a balanced offensive attack for Westfield Tech.
“The team chemistry is coming together,” Westfield Tech coach Kyle Dulude said. “The guys are excited to play basketball, and everyone’s positive behavior is great to see. We will have to stick together Friday as we have a tough road game at McCann.”

LATE RESULTS – Tues., Jan. 9
PVIAC SKI – Race 1
St. Mary’s senior Matt Masciadrelli proved fastest on the mountain at Berkshire East in Charlemont Tuesday night, winning the slalom over East Longmeadow’s Cam Ottoson.
The St. Mary’s boys ski team placed four skiers in the overall top 20, and four in the top 10 in the division standings.
“The boys have some depth this season and we have strong skiers deep into our roster,” St. Mary ski coach Andy Lussier said.
Jack Masciadrelli finished seventh overall (3rd division), Hayden Lussier was 15th (4th division), and Collin Freeman, 20th (6th division).
St. Mary’s freshman Chloe Lussier placed ninth overall among the girls, and second in the division.
“She has been skiing well and has been attacking,” coach Lussier said.
The Saints coach could not contain his enthusiasm in regards to what lies ahead.
“It’s great to have a full roster of boys as well as enough girls to field a scoring team,” coach Lussier said. “If you consider where we started a few years back when we started the team with only five boys, this is a great evolution.
“Now we have 10 boys and five girls so both can be scored as teams,” he added. “We have a great group of athletes this season who are very coachable and willing to learn. We’re pretty excited about this season.”