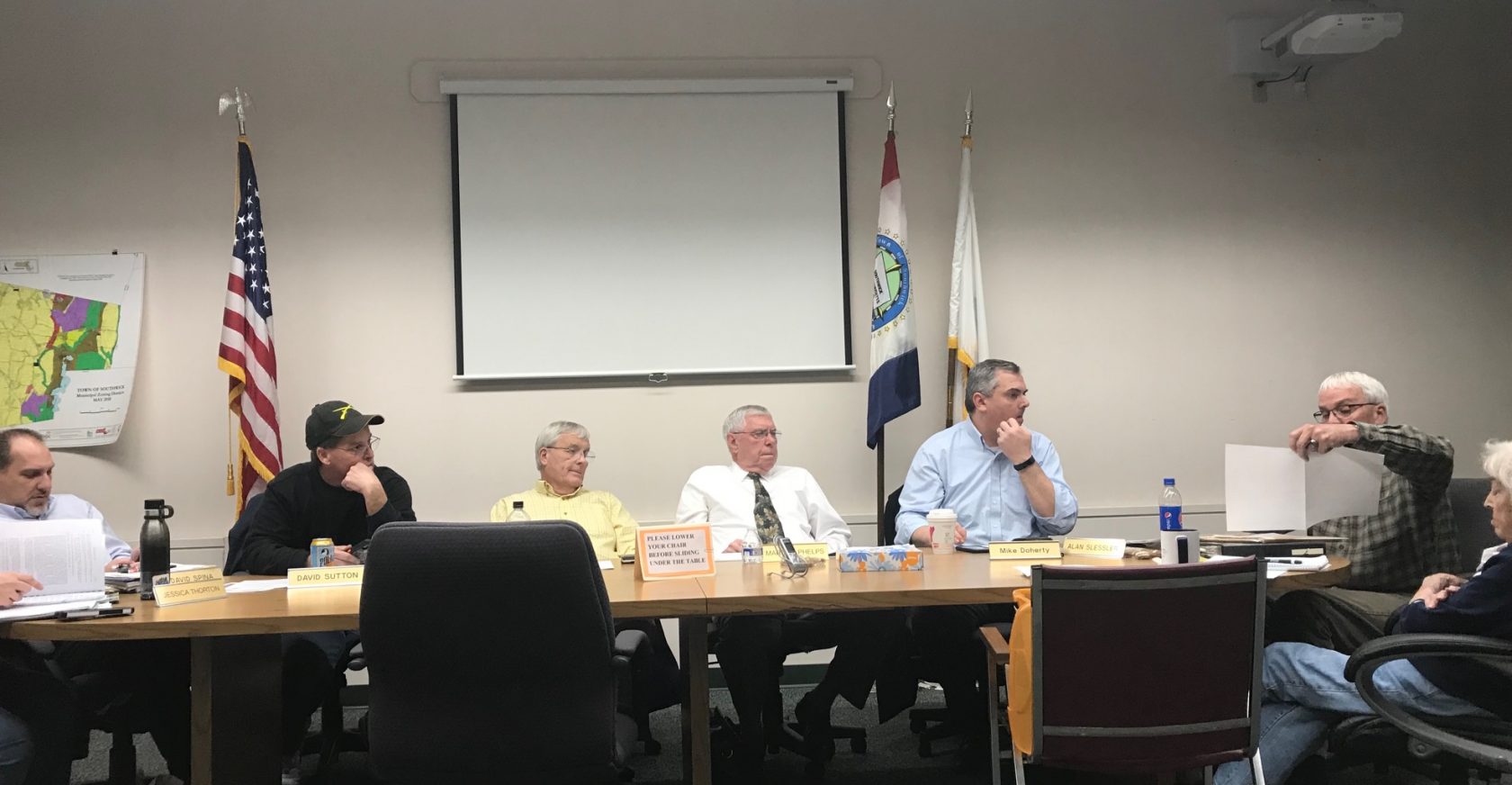 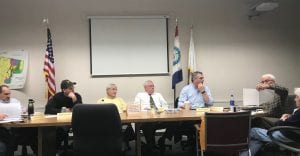 The Planning Board is seen briefly discussing the hearing that is to be continued for February on a marijuana growing facility in town. (Photo by Greg Fitzpatrick)

SOUTHWICK – Prior to Tuesday night’s Planning Board meeting, Jon Goddard of R. Levesque Associates informed the Westfield News that Southwick Greenhouses Inc. has postponed their continued public hearing that was scheduled for Tuesday.

Goddard, consultant for the project that Southwick Greenhouses Inc. is developing, said that the continued public hearing has been requested for February 5.

Paul Dellatorre, owner of Southwick Greenhouses Inc. at 27 Hudson Dr. that’s been operating in town since 1983 growing roses, is looking to diversify his business by growing and producing marijuana in his facility.

Dellatorre is looking to get approved for a special permit by the Planning Board in order to move forward with the project.

According to Dellatorre, the building has not been in operation since he decided to stop growing roses. Dellatorre added that importing roses has become much cheaper than growing them and making it tougher to be successful in the business.

About four years ago, Dellatorre noted that an individual was interested in using his greenhouse to grow medical marijuana when the substance first became legal in Massachusetts in 2012. Despite taking the proposal to the Planning Board, Dellatorre didn’t receive enough votes to move forward.

Dellatorre added that he’s open to having an investor or a professional grower join the project, but for now, he will be conducting the growing and producing process of marijuana, along with six to 10 employees.

If the special permit is approved, the security systems will be upgraded as Southwick’s town bylaw for marijuana cultivation requires that there has to be two separate camera systems on the outside of the property in order to cover the entire property. The Cannibis Control Commission, the state’s legal authority for marijuana, will have access to the surveillance system in order to watch the whole operation inside and outside of the building. The Southwick Police would also have access to the camera system.

In order to ensure the operation is secure, Dellatorre acknowledged that the outhouse buildings where the packaging and processing is taking place will only be accessed by specific employees who are responsible for those duties. Maintenance workers or other employees will be restricted from those areas.

The Planning Board has asked Dellatorre and his consultant, John Goddard of R. Levesque Associates, to make some improvements on the site plan for the special permit. Included in that will be having further discussion with the police department about security and with the fire department regarding installing sprinklers inside the facility.

The reason for Dellatorre requesting the continued public hearing be pushed to February 5 is due to the planning aspects of the project that the greenhouse owner needs to solidify. Dellatorre is working with an architect for the inside of the building.

“The town likes to have a good firm grasp on what’s happening inside the building,” said Dellatorre.

Although Goddard noted that most of the planning for the inside of the building has already been ironed out, Dellatorre needs to work on where the exact location of the cultivation of the marijuana would take place, having the required clean spaces, and making sure the products would be transferred from the facility the exact way the CCC (Cannabis Control Commission) requires them to.