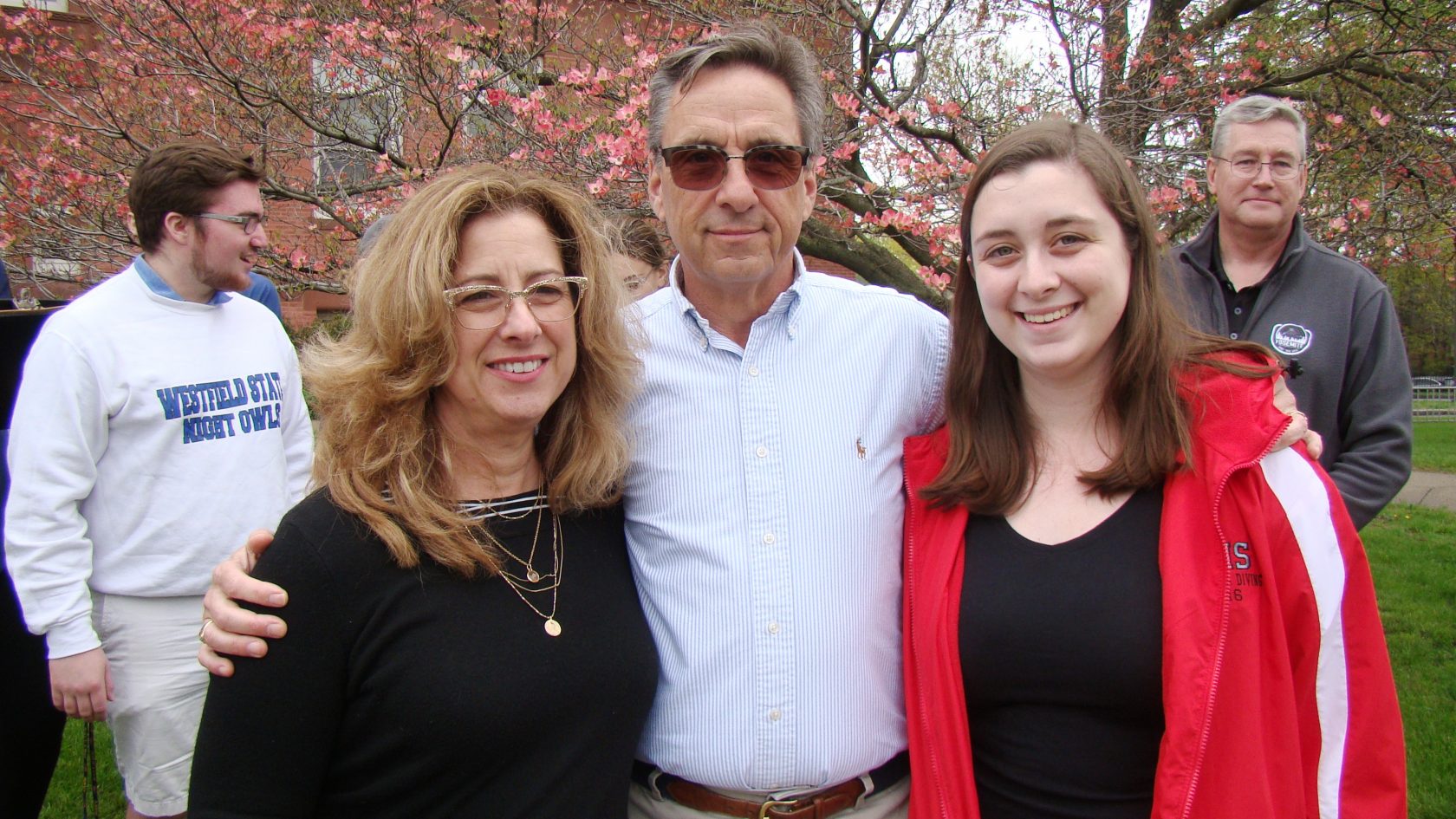 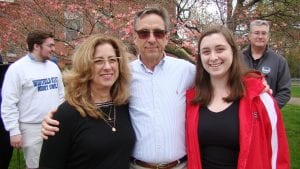 Michael McCabe with wife Jen and daughter Kate at announcement of run for Mayor of Westfield on Thursday. (Photo by Amy Porter)

WESTFIELD – On Thursday afternoon, Westfield Police Captain Michael McCabe, 56, gathered on the sidewalk outside of City Hall with his wife Jen, daughter Kate, and crowd of mostly youthful supporters that he has coached and taught, to officially announce his candidacy for the office of Mayor of Westfield.
“As a husband, father, community activist, philanthropist, educator, professor, coach and dedicated servant to the city of Westfield for the past 34 years, (and) currently a captain of the Westfield Police Department, I am announcing today that I am running for Mayor of Westfield,” McCabe said.
McCabe spoke after filing his nomination papers in the City Clerk’s office. He said he had been planning to run for Mayor for awhile, but due to a change in situations, decided to launch an accelerated run this year. McCabe said he will continue to serve as Captain in the WPD.
“This will give him a lot more freedom to do more for the city,” said Jen McCabe. “It should be a lot of work, and a lot of fun,” she added.
McCabe is used to running, as a cross-country coach at Westfield High School, but this will be his first run at elected office. The only other candidate to enter the race for Mayor to date is Sen. Donald F. Humason, who has served state office since 2002, first as a State Representative, and then as State Senator. 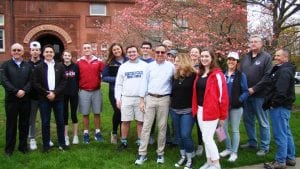 Michael McCabe, center right, with family and friends at announcement of run for Mayor on Thursday. (Photo by Amy Porter)

Students from McCabe’s cross country team were at the announcement to cheer him on, as were students from law enforcement classes he teaches at Westfield State University. When asked to describe him as a teacher, students called him interesting, enthusiastic and knowledgeable. One student said he was courteous to his students, and another said that he is honest about real life issues.
“We have a magnificent city – with incredible natural resources and landscapes. We have safe neighborhoods and community minded residents that attract people to make Westfield their home. And we have industrious and prosperous small and large businesses that contribute to our economy,” McCabe said in his announcement.
“But as I have begun my listening tour there is clamor in the city for change. For a more productive city government that works collaboratively to move the city forward. For a more business friendly process that supports expansion and relocation of businesses to Westfield. For schools of excellence that set a high bar for all learners. That’s why I am running and entering the race – to bring needed change and move the city forward to a dynamic future with leadership and respect,” McCabe said.
McCabe said he is planning a kick-off event for his campaign, which he said will likely be held in Stanley Park on the evening of May 16. Meanwhile, he will be busy knocking on doors in town, listening and asking people what their concerns are.
“I look forward to continuing my listening tour, getting out into the community even more over the next months, meeting citizens and business members and learning how to make your city government work for all your needs. I am running for ALL of Westfield,” McCabe said.