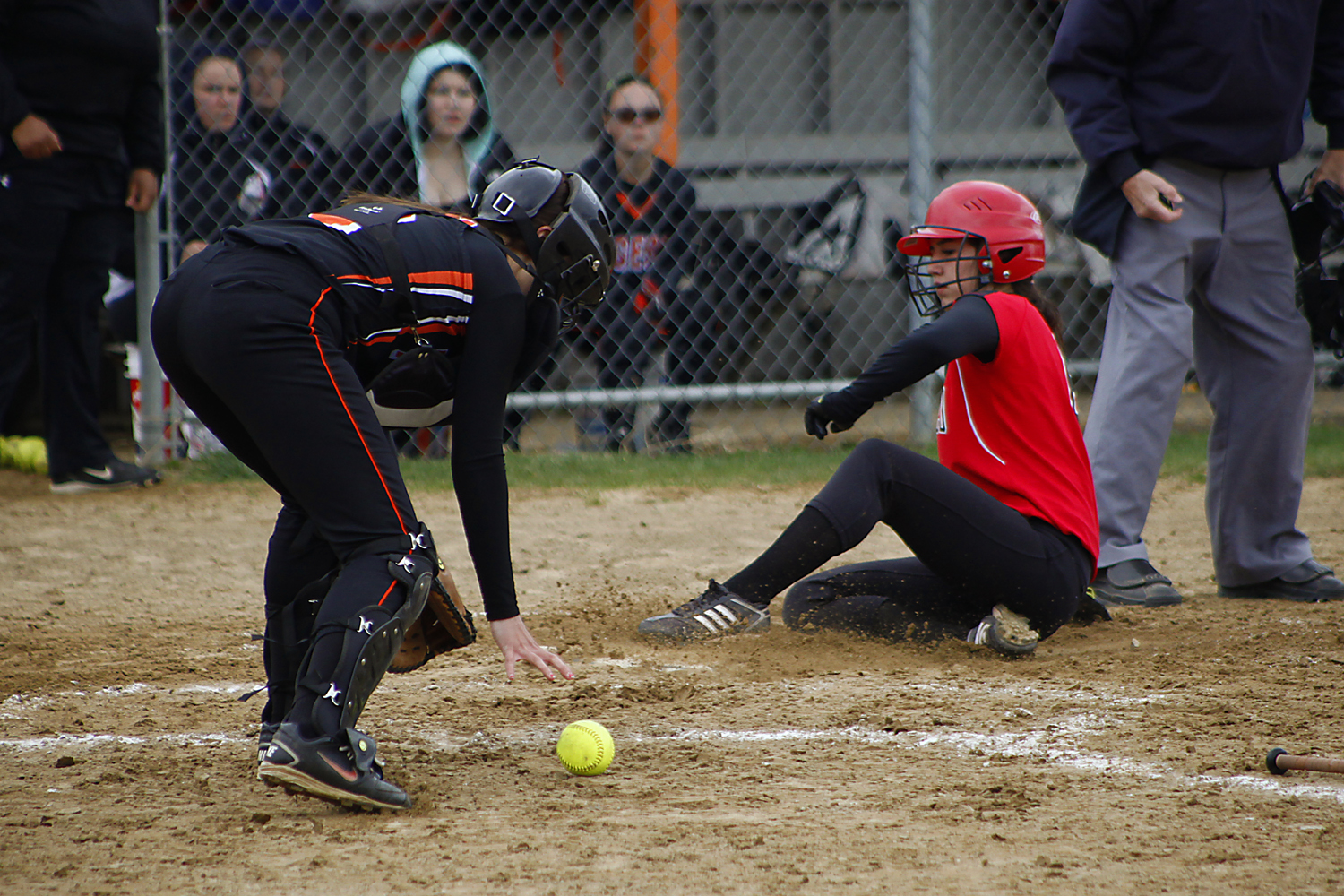 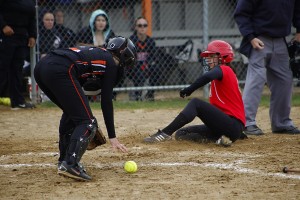 WESTFIELD – The Westfield High School softball team has established itself as the best squad in all of Western Massachusetts, having done so with an unbeaten mark of 11-0.
Westfield senior Maddy Atkocaitis has continued to pound the ball this season, adding to her 100-plus career hits almost daily.
“She’s really locked in,” Westfield coach Joe Stella said of his batting leader.
It has not been a solo act for Atkocaitis though. Many Bombers’ hitters all throughout the lineup have contributed at some point throughout the 11-game win streak.
“Everyone’s been getting the bat on the ball and contributing,” coach Stella said. “We’re keeping the pressure on (opposing) defenses. That has worked well for us.”
Westfield senior Sarah McNerney has been a staple of consistency on the mound, proving to be a big game pitcher in her final high school season.
“She rises to the occasion,” Stella said of his ace. “She’s proven that time and time again. “She’s been there for us and I expect her to continue to do that.”
Catcher Kate Puza has been a force defensively, completing an electric battery for Westfield. She has also delivered at the plate, offensively, as well.
While Westfield may be head and shoulders above the competition, time will tell if the Bombers have legs to continue their run.
Nine games remain on the regular season slate, including a few tough ones.
“I look at them all as a big challenge,” Stella said, “but the ones that standout are Longmeadow, who has a standout pitcher; East Longmeadow, who is playing very well, and Agawam.”
Westfield has already beaten the defending Western Massachusetts Division I champion Agawam Brownies this season, 11-2. The Bombers end the season at Agawam.
“We need to continue to play the way we have been playing and not get hung up on this undefeated (stuff),” Stella said. “It’s not about who we are playing, but about us playing within ourselves.”
“We don’t need to worry so much about the results – winning will take care of itself,” he added. “We need to make sure we’re playing our best ball at the end of the season.”
Next up for Westfield: vs. Chicopee Comp (May 1), at East Longmeadow (May 5), and at Northampton (May 7).

Rams off to hot start
DIVISION II
SOUTHWICK – Southwick-Tolland Regional High School freshman softball pitcher Emily Lachtara has already tossed three no-hitters (one of which was a perfect game), and the Rams are off to a blazing start at 8-1.
Southwick is armed with much more ammunition than one young phenom though, Rams’ coach Todd Downie said Wednesday.
“Our offense has been pretty strong, hitting the ball well,” Downie said. “Obviously, Emily is pitching well, but our defense has been there behind her.”
Southwick has been nearly flawless on defense, committing just two fielding errors.
“If we continue playing the way we have been playing and get better, then this team has a lot of promise. And we need to stay healthy.”
Next up for Southwick: vs. Palmer (May 2), vs. Granby (May 6), and at McCann Tech (May 7).

Tigers eye .500, beyond
DIVISION III
WESTFIELD – The Westfield Vocational-Technical High School softball team stands at a crossroads.
For the last couple of seasons, the Voc-Tech softball program has been on the brink of elimination with participation numbers dwindling. Now, the Tigers are on the edge of fielding a winning team.
“We have like 14 girls showing up to practice consistently every day,” Voke coach Karen Gomez said. “They’ve really made a commitment to be part of the program.”
Sophomore OF/1B Stephanie Allen has been a key member of the program. Allen is a St. Mary student who is playing under the current co-operative agreement.
Voc-Tech is currently 4-5. The Tigers sights are set on a .500 record, and what lies beyond.
“The girls need to work more on commitment in games,” Gomez said. “To mentally know the count, know what the pitches are. They’re out there every day physically. Let’s get there mentally.”
Up next for Westfield Voc-Tech: vs. Franklin Tech (May 2), at Pathfinder (May 6), and vs. Commerce (May 12).

Dame, seniors lead Gators
DIVISION III
HUNTINGTON – The Gateway Regional High School softball team only has one win, but the Gators have produced some exciting moments.
Gateway junior outfielder Sammy Dame is hitting a spectacular .462 at the plate, and has a .533 on base percentage. She currently holds a five-game winning streak.
“She’s been a pleasant surprise,” Gateway coach Matt Bonenfant said of Dame.
Seniors Becca Williams and Arielle Baillargeon have also provided an offensive boost. Both players are hitting over .300, and hold .400-plus on base percentages.
Baillargeon has a home run.
“The girls are working hard,” Bonenfant. “They show up, come to play. They’re frustrated. We’re not happy, but we’re working through it. They’re trying to power this thing.”
Gateway’s record is currently 1-8.
“Our record is not a result of our effort,” Bonenfant said. “Our record is disappointing; our effort is not.”
Up next for Gateway: home games versus Monson (May 1), Lee (May 2), and Holyoke Catholic (May 5).