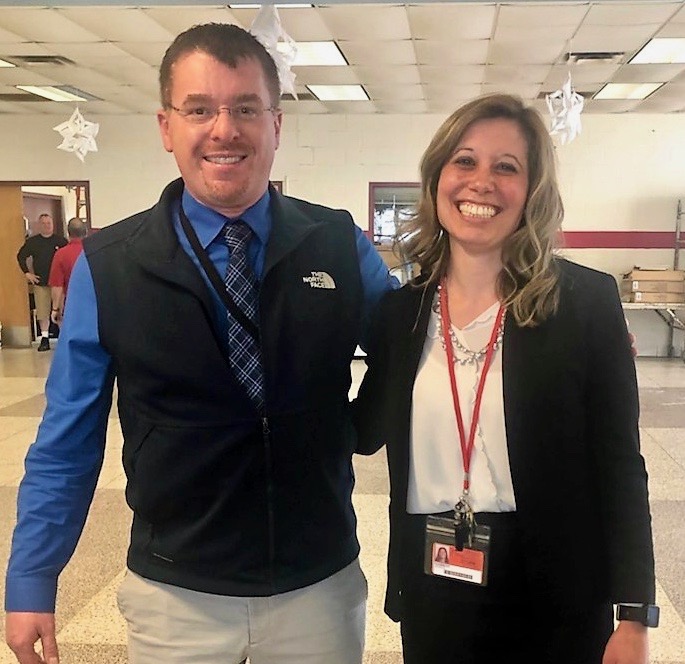 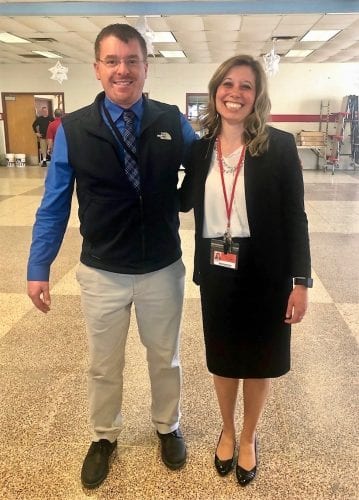 Superintendent Stefan Czaporowski and WMS Assistant Principal Jessica Kennedy, at the announcement that Kennedy will be the next Principal of WMS. (WESTFIELD PUBLIC SCHOOLS PHOTO)

WESTFIELD – Superintendent of Schools Stefan Czaporowski has announced that Jessica Kennedy is the new principal of Westfield Middle School.
“I’m excited. I’m thrilled to be in this position. I love this school, the teachers, the community, the students. I’m lucky to be able to do this. I feel very fortunate,” Kennedy said.
Kennedy, who lives in East Granby, Connecticut, has served as an assistant principal at South Middle School, North Middle School, and Westfield Middle School since 2013. Before coming to Westfield Public Schools, Kennedy was a middle school teacher for five years.
When asked what her plans are for the school, Kennedy didn’t hesitate. “What I really want to do is help to take the school to the next level,” she said, adding that she wants to expand on the programs they have developed at the school.
One critical missing piece that Kennedy would like to address is the stress level that she sees in students and teachers. She said often the students are carrying a heavy load, sometimes trauma, and their stress can be taken on by the teachers who are working with them.
“We have a pretty unbelievable staff — gifted staff – who are kind and loving and who genuinely care about our kids,” Kennedy said. She said even those who are doing a wonderful job, sometimes think they’re not doing enough.
Kennedy talked about incorporating the teachings of University of Houston Research Professor and Storyteller Brene Brown, who talks about unlocking everyone’s potential through sharing their stories with others. “What we know matters, but who we are matters more,” Kennedy quoted as an example of Brown’s teaching.
Towards that end, Kennedy said she would like to host a series of “You Matter” retreats for students and for teachers. The first student retreat is scheduled for March 14 at the school, and will be co-led by Gary Nadeau, Advance Manufacturing Tech teacher at Westfield Technical Academy, who is also the district’s social and emotional coordinator.
Kennedy said she has 15 students signed up for the Saturday all-day retreat, who are looking forward to going. “It’s a connection,” Kennedy said. She said in the future, she would like to hold optional Saturday retreats for teachers as well.
Kennedy holds both her bachelor’s in English Secondary Education and master’s in English literature from Westfield State University.
Czaporowski said the hiring process included input from community members, School Committee, parents, students, staff and district administrators.
“We received a lot of feedback, which vastly supported Ms. Kennedy as principal,” he said. Czaporowski informed staff at Westfield Middle School at the end of the day on March 5. Kennedy will begin her new contract with the district on July 1, 2020.