WESTFIELD – Westfield State rallied for a pair of third period goals, including one with 14 seconds left, but the Owls comeback try fell just short as Westfield State lost to Nichols College, 4-3, in a non-conference men’s ice hockey game at Amelia Park Ice Arena on Thursday evening.
The Bison jumped out to a 1-0 lead on their first shot on goal, as Nick Mangone (Massapequa, NY) fed Daniel Iasenza (Pierrefonds, Quebec) on a give and go on a 3-1 counter attack and Iasenza slid a shot inside the left post 2:10 into the contest.
Justin Tiso (Suffern, NY) gave Nichols a 2-0 lead at the 14:09 mark. 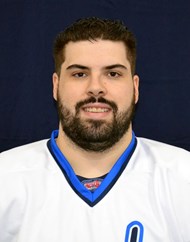 The Bison took a 3-0 leadoff at the 3:53 mark of the second period with Scott Cuthrell (Waterford, Mich.)converting off the rebound of Matthew Menta’s (Lima, Pa.) redirect of a JB Baker (Columbia, Md.) shot.
Westfield started it’s comeback try as Daniel Backstrom (Helsinki, Finland) picked up a loose puck near center ice and scored on the breakway with 6:28 left in the second period. The Owls chopped the lead to 3-2 when Nik Passero (Fort Erie, Ont.) scored a power play goal at the 12:08 mark of the third period.
Nichols answered with tally from Cody Rogers (Austin, Texas) off of tic tac toe passing from Baker and Menta to give the Bison a 4-2 lead with 3:30 left in the contest.
Westfield pulled goaltender Jonathan LoParco (Vaughn, Ontario) with 20 seconds to play and the Owls were instantly rewarded with Passero netting his second of the game after Jackson Leef (Ft. Wayne, Ind.) won a faceoff in the left corner and F.X. Girard (St. Lazare, Quebec) fed Passero at the left post to cut the lead to 4-3 with 14.4 seconds to play, but Westfield was unable to get the equalizer in the final seconds.
Nichols, which received votes in the latest US College Hockey Online poll, improved to 7-3-2 on the season. Westfield State drops to 6-5 overall.
Loparco stopped 32 shots in net for Westfield, while Colin Brennan (Chester, N.J.) made 22 saves for Nichols.
Westfield will next be in action on January 5 at Southern New Hampshire. Nichols will host the University of New England on Saturday at the Levy Rink in Harrisville, R.I. – Courtesy of Westfield State University Sports