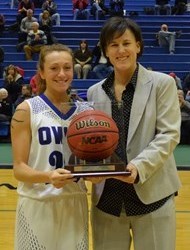 WESTFIELD – Western New England outlasted Westfield State in overtime, 97-93, in a back and forth battle in the Woodward Center Thursday.
Emily Anderson (Rocky Hill, Conn./ Rocky Hill) opened the extra frame with two three pointers on successive trips followed by a Dorothy O’Neill (Staten Island, N.Y./ St. John Villa Academy) steal and two free throws to claim an eight point edge the Golden Bears would cling to for the win.
Anderson scored eight of her game- leading 33 points in overtime, on the way to an impressive 7-9 night behind the arc.

The Owls pulled to within one with 1:19 remaining after layups by Jill Valley (Orange, Mass./ Mahar) and Kirsy Segarra (Holyoke, Mass./ Holyoke) but the Golden Bears were 6-6 from the line down the stretch to seal the victory.
The game was knotted 16 times with 15 lead changes, five of which came in the final three minutes of regulation.
The Golden Bears held a one point advantage with 34 seconds in regulation when Sammie Olson (Tolland, Conn./ Tolland) took off on a breakaway layup before Rebecca Sapouckey (Chicopee, Mass./ Granby) blocked the shot, paving the way for Valley to convert a free throw tying the game at 81 and sending it into bonus time.
Valley led the Owls with 24 points and five steals, while Paige Young (Berlin, Conn./ Berlin) registered 19 points and 19 rebounds in the win.
Westfield State slips to 4-3 on the season and Western New England improves to 6-2.
Both teams return to action on Saturday, Dec. 10 when Westfield State hosts Smith College at 3:00 p.m. and Western New England travels to Elms College for a noon tip.

MEN’S RESULTS
Williams College 84, Westfield State University 65
Westfield State University fell to Williams College, 84-65, in a non-conference men’s basketball match in Williamstown.
Westfield State found success early in manipulating Williams’s man defense and finding open shots; six of the Owls’ first eight points came from two uncontested three-pointers by senior Shane Pasquantonio (Ashland, Mass.). While the Ephs’ efficient, making well upwards of sixty percent of their shots, they were also plagued by turnovers early. The Ephs coughed up the ball four times in the first ten minutes, while Westfield State had zero turnovers.
Threes by Cole Teal and Dan Aronowitz put the Ephs on top 13-8 with around six minutes elapsed, but sophomore Peter Mafo (Lynn, Mass. / Lynn Classical) and senior Aaron Burke (Worcester, Mass. / Worcester Tech) answered with back-to-back treys of their own to retake the lead for the Owls. The margin stayed in the low single digits for the next several minutes, with clutch spot shooting by the Owls keeping them in the game.
With around seven minutes to play in the half, however, the Ephs turned on the jets. Williams went on a 21-5 run in the last 6:22 of the half, holding Westfield State to only one successful field goal in that period. Cole Teal sunk a three to kick the Ephs off, followed by a wide open trey by Michael Kempton and two fast break buckets by Kyle Scadlock. With the score sitting at 34-22, the Owls called timeout to regroup.
Coming out of the timeout, Mafo got a tough floater to fall, but Williams picked right back up where they left off with a tip-in by Marcos Soto. With time running out, Kyle Scadlock knocked down a baseline trey to take the score at the half to 44-27.
Westfield State stayed competitive, however, shooting over 50% from the field in the second half of play. Nevertheless, Williams increased their margin to 25 at its largest with eight minutes left in regulation.
The Owls gained back a little ground in the last few minutes, but not enough to make the contest competitive again. At the final buzzer, the margin sat at nineteen: 84-65.
Owls’ senior Shane Pasquantonio (Ashland, Mass.) led all scorers, putting up 21 points for Westfield State and leading their contingent of four double-digit scorers, while sophomore Marcus Collins (Cambridge / Rindge & Latin) contributed 9 rebounds for the Owls.
Daniel Aronowitz led the Ephs in scoring with 19 points following a perfect second half, while Kyle Scadlock put up 17 points and nine rebounds.
The teams were about even in rebounds and turnovers, but Westfield struggled shooting while Williams found their groove; the Ephs hit 59.3% of their shots, compared to just 39.3% for the Owls.
The Owls fall to 2-6 on the season while the Ephs improve to 7-1.
Westfield State will host the Wesleyan Cardinals on December 10th at 1:00 p.m. while Williams College will travel to Springfield, Mass. to face the Pride on the same day. – Courtesy of Westfield State University Sports