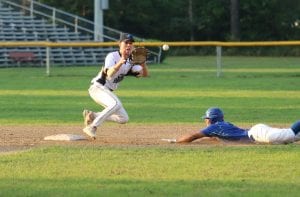 Starfires’ Dolan Ocasal (19) records an out at second base during Tuesday’s Futures Collegiate Baseball League game against North Shore at Bullens Field. (Photo by Kellie Adam)

WESTFIELD – In Tuesday’s contest versus the North Shore Navigators, the Westfield Starfires were no match for the opposing team’s offensive production and exited Bullens Field with an 11–3 loss.
The win was credited to North Shore pitcher Cedric Gillette; the loss to Westfield’s Mason St. Pierre.
North Shore dominated the Starfires for the majority of the game, scoring nine runs in the first four innings and recording a grand total of 17 hits in the matchup. Sean Lawlor had four hits on the night while Kade Kretzschmar and Nolan Watson picked up three apiece to help the Navigators to victory.
Westfield was shut out by North Shore until the sixth inning when the Starfires were finally able to bring the bats to life and put themselves on the scoreboard.
Four hits in the inning, all singles, allowed for a pair of runs to come across the plate. Pat Galvin and Dolan Ocasal picked up two RBIs in the inning while Sean Murphy and Tommy Quinn both recorded hits as well.
One more run in the seventh would end the scoring for the Starfires, and the Navigators solidified their victory by continuing to shut down the home team.
The teams will face each other on Bullens Field again for the final time this season on Wed., July 31 as the Futures League enters its final week of the 2019 regular season. – Courtesy of Audrey Gamble/Westfield Starfires