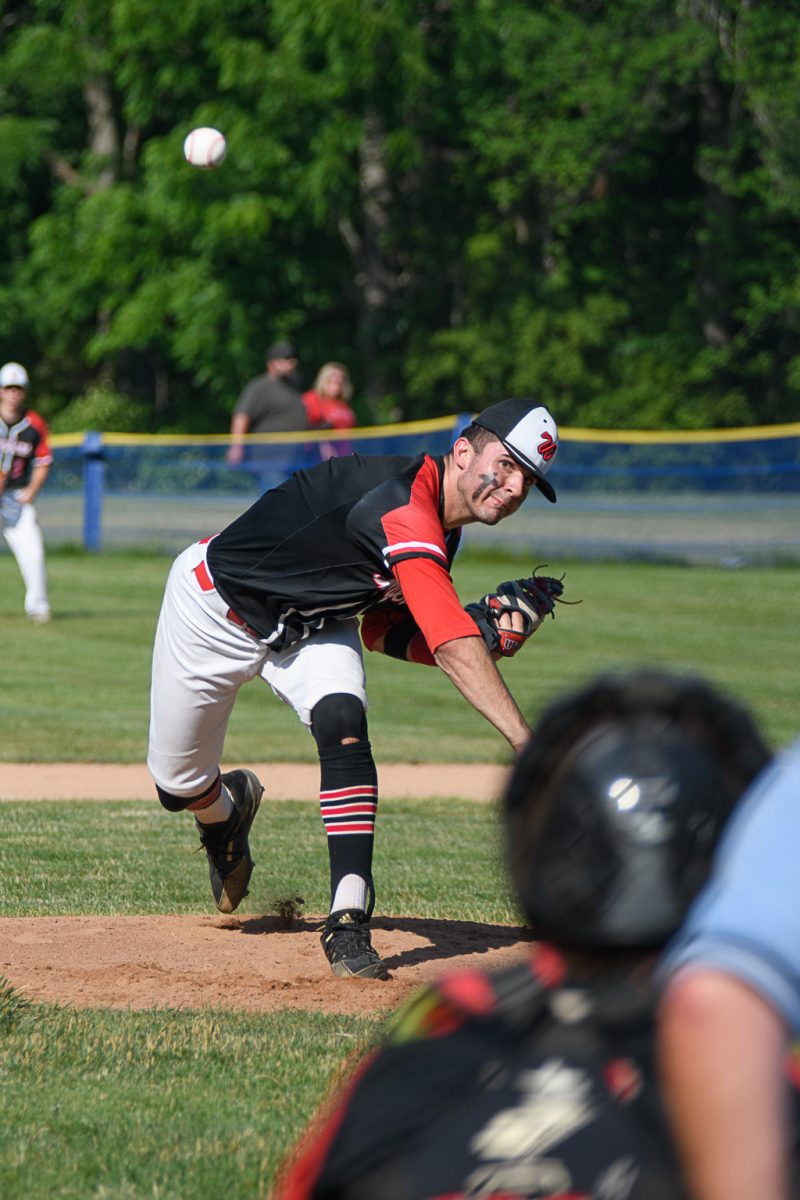 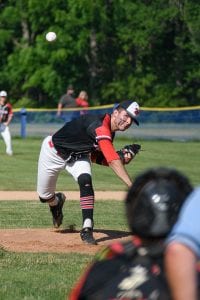 WESTFIELD – There were no losers in the West Division 1 baseball championship – – there was just one winner.
Northampton’s Jack Keller-Mochak hit a walk-off, run-scoring single with two outs in the bottom of the ninth inning of a pitcher’s duel to lift the top-seeded Blue Devils over the No. 6 Westfield Bombers 2-1 in the West D1 baseball finals Monday at Northampton High School.
Keller-Mochak smacked a liner off the Westfield reliever’s glove. The ball kicked to the shortstop, who was unable to beat the baserunner with a throw to the first baseman. The play kicked up a cloud of dust, but for Northampton it was cloud nine as Jack Power, who led off the inning with a single and advanced to second base on a fly-out, came around to score the game-winning run.
“That’s the kind of baseball game you look for,” Westfield High School baseball coach Mike Kennedy said. “I have nothing bad to say about my guys. A lot of credit to them – – they did it.”
Westfield senior ace Brian Strange delivered one of the gutsiest pitching performances in recent school history. Strange overcame 100-degree heat and the tournament’s top seed, striking out 12 batters and allowing just one run on three hits over seven innings before being lifted due to the maximum pitch count.
Strange, who was coming off a 5-inning, no-hitter in the tournament quarterfinals, overcame nearly every hurdle in the finals.
Northampton (14-2) threatened from the outset. Nate Keller-Mochak reached on an infield error in the bottom of the first, and Strange issued a free pass. No. 3 batter, Dominic Badorini appeared to load the bases with a single through the right side, but a baserunning miscue by the Blue Devils resulted in a tag-out at third base. Strange induced a pair of fly outs to end the inning.
Strange retired the next eight batters, three by way of the K. He was cruising until Badorini, in his second at-bat, smacked another single, this time up the middle to begin the fourth. The next batter, Wilson Heath flied out to the right fielder deep in foul territory. The catch was made in the field of play, but the play carried the outfielder out of play, and Badorini was awarded second base. Strange was then credited with a balk, which the Westfield coaching staff contested to no avail. One batter later, Eddie Sarafin drove a line drive up the middle, resulting in a Northampton run.
Westfield stayed focused. After getting base runners on in each of the first, second and fourth innings, the Bombers finally broke through in the fifth.
Strange took a pitch to the back to draw a base to begin the fifth inning. He soon swiped second base on a wild pitch and advanced to third when the Northampton catcher’s throw to second base scooted away from the infielder. Strange scored on a wild pitch and the game was all even.
Westfield (11-5) threatened to take the lead in the seventh when Alex LaCourse singled, advanced to second base on an Andrew Florek sac-bunt and moved to third on a Strange groundout. Northampton starting pitcher Will Shaw (4 hits allowed, 9 Ks) forced a fly out though to end the inning.
Strange cruised through the latter innings, retiring 10 straight batters – – nine on strikeouts – – before Northampton’s Max Callan singled with two outs in the bottom of the seventh. Strange picked off the base runner though to send the game into extra innings.
Westfield managed to get a runner in scoring position when Joey Calderella doubled with two outs, but Northampton reliever Seth Finnessey came back to strike out the next batter to end the top half of the eighth inning.
With Strange maxed out on pitches, Jake Jachym entered in relief duty. He was equally impressive, retiring all three batters he faced in the bottom half of the eighth inning.
Westfield put itself in prime scoring position again with a Cody Collins single to begin the ninth. Pinch runner Brennan Jarvis advanced to second base on an errant pickoff attempt. Finnessey battled back to strike out the next batter and forced two fly outs to end the inning.
Time ran out for Westfield in the ninth. Power singled and moved to second on a pop-fly. Heath was hit by a pitch. After a ground out by Sarafin, Jack Keller-Mochak delivered the final blow.
“It was just a great game all-around everywhere, both teams,” said Strange, who despite feeling saddened by the loss showed great respect for the opposition. “It was real hot but I kept my composure and did my thing.”
Although officially runners-up, Westfield will best be remembered for assembling one of the best pitching staffs at the school in some time. Strange, sophomore Josh Mayo, senior David Tirrell and Jachym allowed no runs through the first three tournament games, and just two runs combined the entire postseason.
“It was a very good season,” coach Kennedy said. “Josh Mayo had a 0.40 ERA, Bri was coming into this game 1.51, and Jachym was 0.00. We did a great job. I couldn’t ask for more.”