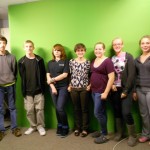 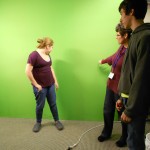 Broadcast professional Michele Crane gives tips on what not to wear in front of a green screen (i.e., green) to Huntington students Allison Garriepy and Jonathan Wyant of the Gator News Network. (Photo by Amy Porter) 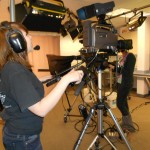 Ursula Bath of Blandford gets used to running a camera for the Gator News Network. (Photo by Amy Porter) 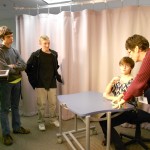 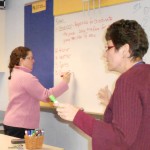 On Wednesday, the Gator News Network production crew met for their first regular meeting to prepare for the debut broadcast of the student-run TV news program at Gateway Regional High School.
The network is the result of a year-long discussion and collaboration between founding sophomores Jonathan Wyant of Huntington and Ryan Smith of Blandford, and Gateway Director of Technology Angela Burke.
Jonathan Wyant said, “When I first started working in the technology department for graduation ceremonies, I always asked why the camera equipment was not being used.” Both he and Ryan Smith serve on the tech crew at Gateway.  He was referring to the professional digital videotape cameras that had previously been used once a year as a backup for the graduation ceremonies, to broadcast to a wider audience in case of rain. Other than that, the cameras were sitting idle.
Jonathan said he was interested in doing more with the equipment, but never had anyone to advise the program, until he began speaking to Angela Burke. Said Burke, “I’m very proud of Jon and Ryan and how they took the initiative to get all this together. “
Jonathan and Ryan coordinated with the director of facilities to find a larger space in the building for the broadcast.  “The old space was too cramped,” Jonathan said.  He and Ryan built the new studio from scratch. Jonathan said the welding program made the teleprompter stand and brackets for the lighting, and the maintenance department hung the curtains and the green screen.
Currently ten students are signed up to participate in the Gator News Network, although there are openings and room for more students.
At Wednesday’s meeting, Burke had invited as a speaker Mrs. Michele Crane of Blandford, a voice over artist and former TV news reporter and anchor in Springfield, who has two children in the district.  Crane talked about the role of the producer in a broadcast, who is the audience, setting the rundown of stories, and what makes a good lead story.
Some of the students had previously interviewed Superintendent David Hopson about the water main break the week before, which closed Gateway for two days (Oct. 17 and 18), and from which the school’s drinking water has not yet been tested and cleared.  Crane watched the video with the students, offering pointers on interviewing and how to frame a shot. Overall, she said, the footage was good, and would make a good lead story in the first broadcast.
Angela Burke said she plans to invite more broadcast professionals as guests in the future.
Initially, edited weekly broadcasts will be aired on Fridays on the Gateway Regional website at www.grsd.org.  However, the group has bigger plans. “We’d like to go on the Huntington local channel,” Jonathan Wyant said. Their goal is eventually to do live broadcasts. “We probably want to go live every morning by next year, sooner if possible,” he added.
Currently, however, the group is wrestling with technical challenges, for example how to feed the analog tape into a digital medium.
Angela Burke said, “Our goal for next year is to have this offered as a regular course for the high school. The production piece might be a class, and the writing piece might be a different class. We really want to introduce the technology into the curriculum; especially considering the role that video plays in our lives, to see how it’s made, and how easily it’s manipulated. We want to teach the kids to be informed consumers.”