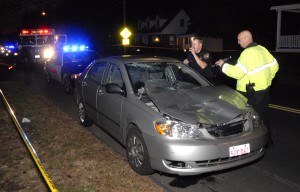 Westfield police officers check this 2005 Toyota Carolla that was involved in a fatal accident that claimed the life of a mother and her son in 2008. Roberta A. Salois and her son, Steven X. Smith-Salois, had been crossing South Maple Street on Halloween night when the two were killed. (File photo by chief photographer Frederick Gore)

WESTFIELD – A city woman was arraigned Wednesday in Westfield District Court on two counts of negligent motor vehicular homicide stemming from a tragic Halloween accident in 2008, which claimed the lives of a 47-year-old Westfield woman and her nine-year-old son.
Roberta A. Salois and her son, Steven X. Smith-Salois, had been crossing South Maple Street shortly after 8 p.m. while the boy, dressed in a dark Batman costume, was collecting Halloween candy. Both were struck by a 2005 Toyota Carolla operated by Anne R. Schlichtig, then 26, of 131 Loomis Ridge.
Both were transported by ambulance to hospital where they were each pronounced dead.
The accident was investigated by both city police and members of the State Police Collision Analysis and Reconstruction Section. The Westfield police officers declined to bring charges against Schlichtig but, after a lengthy state police investigation which concluded in March, 2011, state police filed homicide by motor vehicle charges against her.
In a document filed in support of a criminal complaint, Trooper Jeffrey M. Cahill of the State Police detective unit assigned to the Hampden County District Attorney’s office, asserted that Schlichtig had been operating at excessive speed while her vision was impaired.
Cahioll reports that Sgt. Eino A. Thompson of the State Police collision team concluded that Schlichtig was traveling at a speed of at least 39 mph on the street, which is posted 30 mph, when the crash occurred.
Thompson also reported that Salois had failed to ascertain that there was enough time to cross the road safely with her son. He pointed out that, although there was a marked crosswalk nearby, Salois had failed to use it when she and her son crossed from the south side of the roadway and entered the path of Schlichtig’s westbound car.
Cahill quoted Thompson’s report as saying “Although not overly excessive, had vehicle one been traveling at the posted speed limit … the collision would not have occurred.”
Cahill also reported that witnesses at the accident scene reported Schlichtig had been heard to say that she shouldn’t be driving at night, due to an eye condition.
Cahill reports he interviewed Schlichtig’s optometrist who told him that Schlichtig suffers from a condition called keratoconus, a disease which affects the cornea.
Cahill reports that the optometrist told him that had seen Schlichtig six days before the crash. He said that he had determined that her vision met the minimum requirements for motor vehicle operators but said he had told both Schlichtig and her mother that the young woman “should not drive at night” as her condition would definitely cause her visual acuity to decrease at night.
Cahill’s investigation was forwarded to the Hampden County District Attorney’s Officer for “review and consideration” before Schlichtig was charged.
At her arraignment before Judge Philip Contant in Westfield District Court, Schlichtig was placed on pretrial probation and enjoined from operating a motor vehicle. She was released on her personal recognizance pending a Dec. 21 hearing.