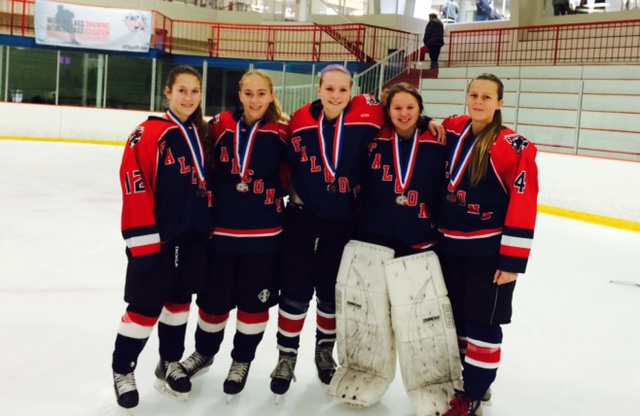 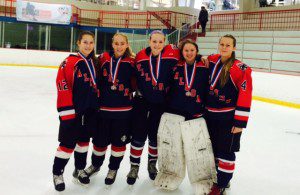 The Westfield contingent of the Junior Falcons U16 team stands together. (Submitted photo)

WESTFIELD – Move over Kacey Bellamy. There’s a young group of Westfield female hockey players attempting to give you – a two-time Olympic silver medalist – a run for your money.
Westfield’s Madison and Mackenzie Pelletier, Brittany Kowalski, Lexi Levere, and Katie Neilsen recently qualified for the USA Girls National ice hockey tournament in Lansing, Mich., in March, fueling the New England Junior Falcons Under-16 team’s run in the Massachusetts state tournament, where they finished second on Thanksgiving weekend at the New England Sports Center in Marlboro.
These five individuals – four of whom currently attend Westfield High School – were instrumental in their team’s success. They will be called upon to carry an even bigger load for the Cathedral Panthers high school girls’ ice hockey team this season. (Neilsen attends Westminster School in Simsbury, Conn. She will not play for Cathedral.) 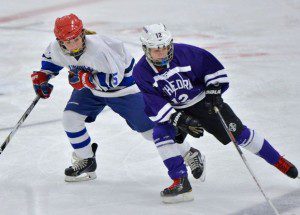 Madison Pelletier, of Westfield, protects the puck for Cathedral during a 2013-14 regular season game. (Submitted photo)

“Many of these girls looked up to Kacey Bellamy in years’ past,” said Cathedral High assistant coach David Pelletier, also a Westfield resident. “It has transcended the sport of women’s hockey, and it just so happens to be in our backyard.”
Pelletier said the success of Bellamy and Team USA’s historic run over the past two Winter Olympics has led to an unprecedented rise in numbers at the youth level, and that the potential for future players and teams is nearly limitless.
As far as the current crop of local high school girls’ hockey players is concerned, Levere, a junior goalie, sophomore defensemen Mackenzie Pelletier and Kowalski, and sophomore forward/center Madison Pelletier, figure to play a prominent role in Cathedral’s success this season. 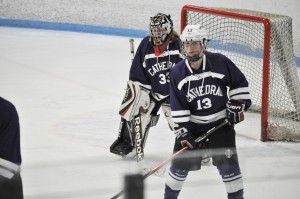 “We are very young again,” coach Pelletier said. “The majority of our players are freshmen and sophomores. (The Pelletier sisters, Kowalski, and Levere) will carry our workload on offense and defense.”
“Our goal is to make the playoffs,” he said. “Our plan is to get one or two more wins.”
Cathedral finished third in the league last season, and missed the playoffs by just one game. The schedule is even harder this time around, coach Pelletier said. 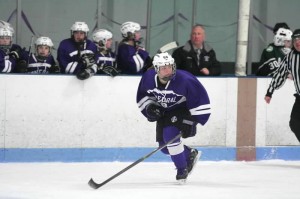 It is the second year of a two-year co-operative venture between Westfield, Cathedral, and Longmeadow high schools for the girls’ ice hockey program. Coach Pelletier said the agreement is likely to be extended beyond the 2014-15 season with interest locally at an all-time high.
The Westfield-Cathedral-Longmeadow contingent will open play December 13 against Auburn at Cyr Arena in the Forest Park area of Springfield at 4 p.m.
Another highlight from the Panthers’ schedule includes a premier showdown against top-ranked Shrewsbury January 2 at Amelia Park Ice Arena at 6 p.m.