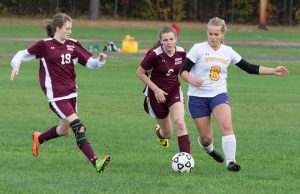 WESTFIELD – Westfield Tech freshman Chelsea Krupa (7 saves) recorded a shutout, and three seniors/captains combined for three goals to pave the way on offense for the hard-charging Tigers, who silence Duggan Academy 3-0 Thursday.
Heather Lannon got the scoring started in the first half. Emily White assisted.
Later in the first half, Sydnie Brock made it 2-0 with a goal off a pass from Sheilla Martinez. Brock also set up White for another insurance goal late in the game.
“I can’t take the time to recognize every player that stepped on the field today, but every one of them earned and deserved this win for us,” Westfield Tech coach Lyle Washington said.
Despite a busy schedule with three straight days of games, Westfield Tech continued to flourish and shows not signs of slowing down.
Washington pointed to assistant coach Alvin Brown’s conditioning regimen for Westfield Tech’s continued high level of endurance.
“(Alvin) has helped push these girls to be able to perform at this level,” Washington said. “Once again – a great team effort.”
Westfield Tech returns to action Friday against Sci-Tech. 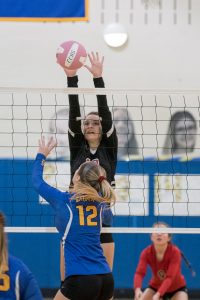