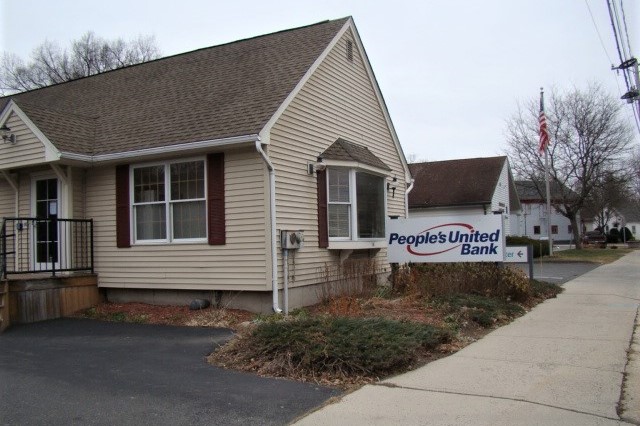 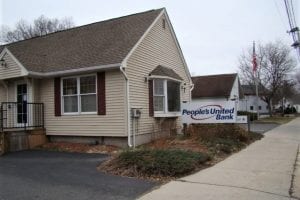 Bank branch in Huntington, with new Peoples United Bank sign, that will close in February. (Photo by Amy Porter)

HUNTINGTON – United Bank customers in Huntington, Chester and surrounding towns are reeling from the news that the bank’s new owner, Peoples United Bank, plans to close the only bank branch in the hilltowns at 14 Russell Road.
A sign posted on the door of the branch late last week read, “To our Valued Customers: This branch location will close as of February 22, at 12:00 p.m. Please visit one of our nearby branches,” and listed locations in Westfield and Northampton.
Residents who had grown to rely on the convenience of banking locally and access to a free ATM machine, and business owners who make daily trips to the branch for cash and deposits, are rallying to see if there is anything they can do to convince the owners of Peoples United Bank to change their minds.
Huntington Liquor Store owner Evelyn Korfias and Linda Hamlin, owner of Mountain Laurel Designs, started a petition expressing the “dismay and strenuous objection to the decision.” The petition goes on to state that the Huntington branch is the only bank in the southern hilltowns, with the next closest almost 20 miles away, and that people from a 15-mile radius bank at the branch.
“The closing of the branch would cause a major hardship to seniors, families and small local businesses in the area. Your bank would lose many customers, as there are numerous other options for banking if they have to travel to the cities to do their banking, and many would be angry about this closure and change to one of the more people-friendly options, should this branch be closed,” reads the petition. 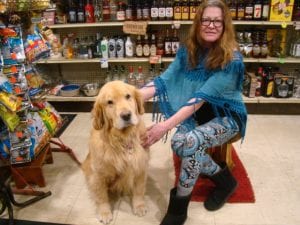 Korfias said that they obtained almost 300 signatures in the first few days the petition was put out in local businesses. She said two young people with accounts at the bank, Marrianne Brown and Melissa Werbicki, went door to door collecting signatures.
Korfias also said that she knows quite a lot of older people without vehicles, who already have to make arrangements for rides to go shopping or to medical appointments. For herself personally, she said it will add an hour each time she has to go to the bank to make a deposit; time that she will have to cover in her store.
Korfias, who along with Hamlin serves on the planning board in town, said having no bank will also add to the impediments for young families wishing to move into the hilltowns.
“This will make it even harder,” she said, adding,  “We hope to to get as many signatures as possible by the end of the month.”
Chester residents are also in an uproar, as the distance for them to a new bank location is even farther.
Hilltown Economic Development Director Jeanne LeClair, who is also organizing residents, said from her perspective it’s more about making sure that everyone’s voice is heard, and not about forcing Peoples United Bank to stay, which she called “a done deal” after speaking to higher-ups at the bank.
“We obviously need some kind of bank to satisfy the economic development needs, which are growing,” LeClair said, adding that new growth has increased in most of the towns due to Broadband access. “We’ve made a lot of progress,” she said.
LeClair has started a Facebook page called Save Our Bank – Huntington, MA to organize advocacy efforts. She said in the first few days she received a ton of responses, and dozens of emails.
“We’re getting a lot of traction as far as organizing residents,” she said, adding that her focus will be on recruitment of a new banking institution.
Meanwhile, she posted Peoples United Bank’s customer service phone number at 1 (800) 894-0300 for residents wishing to lodge an official complaint.
“It’s small towns that still need a physical bank,” LeClair said.