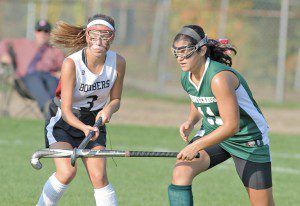 WESTFIELD – The Westfield High School field hockey team has put teams on notice.
Westfield made a loud statement with a gritty 4-3 comeback win over visiting Minnechaug Tuesday. Ashlee Owen and Lexi Minicucci scored two goals apiece to lead the Bombers.
Minicucci rallied Westfield from a 2-0 deficit with two first-half goals, on passes from Owen and Liz Marcyoniak. Owen broke a 2-2 tie when Minicucci delivered a pass for the go-ahead goal with 11:48 remaining in regulation. Owen sealed the deal with an unassisted score with 9:49 left.
“We are definitely ready for the tournament,” Westfield coach Karen Gomez said of her Bombers (9-5-1), who are fast approaching the postseason.
Jenna Rothermel (8 saves) and Karly Mastello (11 saves) combined for the victory in net for Westfield.
“Our motto of the day was ‘our field, our team together’ in celebration of senior day as well as working as a team, and pushing off our bumps and bruises from Longmeadow,” Gomez said.
JV RESULTS
Westfield 1, Minnechaug 0
The lone goal of the game for Westfield came at 25:18 in the first half on a goal from Julia Rowbotham. Olivia Chaoush assisted on the play.
It was an action-packed game, but despite shot after shot from Westfield the score remained the same. Minnechaug goalie Jess Henry made 10 saves in goal; Bombers’ Alexis Corcoran finished with three.
Westfield, which improved to 11-2-1, has two games remaining – both on the road.