WESTFIELD – Westfield State alumnus Jackson Leef ’17 recently signed to play professional hockey for the Fort Wayne Komets of the ECHL, which will complete a dream of playing professional hockey in his hometown and carrying on a family legacy.
Leef’s father, Ron Leef, was a local legend in Fort Wayne, playing seven seasons as a leading scorer for the team and is a member of the Komets Hall of Fame.
With all the chaos that the COVID-19 pandemic has caused, it actually created the opportunity for Jackson Leef’s homecoming.
Leef had been skating with the Brampton (Ontario) Beast of the ECHL for the past several seasons, but due to issues with the border crossing during the pandemic, the Beast opted out of the 2020-21 season, and Leef and the other players on the roster were granted free agency for this season.
Fort Wayne head coach “Ben Boudreau and I both play at the same golf course, so we had a good relationship,” said Leef. “So when the opportunity came to stay home and play, it was a no-brainer for me.”

“My dad retired before I was born, and it would have been nice to see him play,” said Leef. “But even in the aftermath of his career, at the rink, around town, people knew him as it’s a small community atmosphere here.”
Screen grab from the Fort Wayne Komets (Komets.com) web site, announcing Leef’s signing.
“I had a stick in my hand before I could walk,” said Jackson, who said his dad was his biggest influence on his career. “He put in a lot of time with me getting to hockey practices and games, and a lot of effort in me moving up the ranks in hockey.”
Leef played junior hockey in the NAHL for the Texas Tornadoes before being recruited to play at Westfield State.
Westfield State head coach Bob Miele “was very persistent and awesome in the recruiting process,” said Leef. “It had been a dream to play Division I hockey, but eventually it became an easy decision that Westfield State was the right fit, and it was an awesome four years at the school and playing hockey.”
Leef noted that “the relationships that were created, and the people were awesome. I made some of my best friends at Westfield State. I had great relationships with my professors, and got close to a number of them as well, which was a different experience than I had had in juniors, and it was a cool experience.”
Leef earned the Massachusetts State Collegiate Athletic Conference player of the year award after scoring 19 goals with 21 assists as a senior, and scored more than 100 points in his career at Westfield.
“Recruiting him, we knew he was a special player who had had success in the NAHL, and that he was a high-end recruit for us, and he didn’t disappoint while he was here,” said Miele. “He had a great career capped off by an MVP senior season after battling through an injury as a junior.”
Miele also cites Leef’s influence on the team.
“He’s a super person, and was a culture-builder in our hockey program,” said Miele. “He loves the game, worked hard, and was a leader that other players looked up to.” 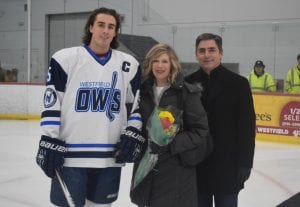 “His motivation” was the thing that stood out, said Miele. “Players that are able to move into professional hockey are almost obsessed with hockey. Jackson wanted to get better, to learn. Even in college he had the mentality to pick the positive out of every drill and every situation. His preparation also stood out as well, whether the work in the summer before the season, or the work before practice, he always wanted to get better and had a goal. Jackson climbing up the ranks, and his increase of production every year in pro is a testament to this, it doesn’t just happen. Having both the motivation and talent was the key.”
Leef played 11 games in the SPHL after his collegiate season was over, then landed with Brampton of the ECHL for the 2017-18 season.
“That first year was kind of a ride, getting a foot in the door in pro hockey,” said Leef. “It’s a different lifestyle. I got a love for the work, the preparation, and the team aspect. That’s what has made it difficult to not be playing right now due to Covid. (The Komets plan to start their season in February of 2021).
“The waiting is hard right now, as I feel like I am at the peak of my game,” said Leef.
Leef has had a one game call up to the American Hockey League in 2017-18.
“That had been an exhausting emotional year,” said Leef. “I had been up and down between the EHL and the SPHL, but when you’re in professional hockey your goal is always to play at the highest level you can. It was awesome to have that experience, but I focus day-by-day on preparing for when those opportunities may present themselves. In pro hockey, every day is a tryout.”
Leef said that Westfield State helped prepare him.
“Juggling everything, classes, hockey, social life really helped me to get into a good routine as I went into a professional career.”
Leef has kept tabs on the Owls’ hockey program through another Fort Wayne native, current Owls’ defenseman Triston Theriault.
“We both train with the same coach during the summers, and I saw him around the rink as he got older. He’s got a good work ethic, and it’s nice to see him go to Westfield State. He even lives in the same house that I lived in in college.”
“Having Triston know who Jackson was certainly helped,” said Miele. “Hopefully we can keep that Fort Wayne connection going.”
Leef meanwhile, continues to prepare to follow the family tradition in Fort Wayne.
“My mom (Nancy) is a Fort Wayne native, she met my dad here,” said Jackson. “I’ve spent summers here training, but now a silver lining is being here in the winter and I have also been able to do some hockey lessons, some youth hockey clinics, and maybe help some of those kids follow in the same shoes.”
“It’s a pretty awesome experience,” said Leef of the opportunity to play professionally in his hometown. “I have played games there as a member of the visiting team, but my whole life I have gone to games there as a fan, and now I have a chance to try to bring a championship there as a member of the home team in front of my family, friends, and hometown.” – Courtesy of Westfield State University Sports